The phoenix rises: Man uses dance to rise from the ashes of his past

Justin-Sears Watson says the power of art helps him use his past to empower. 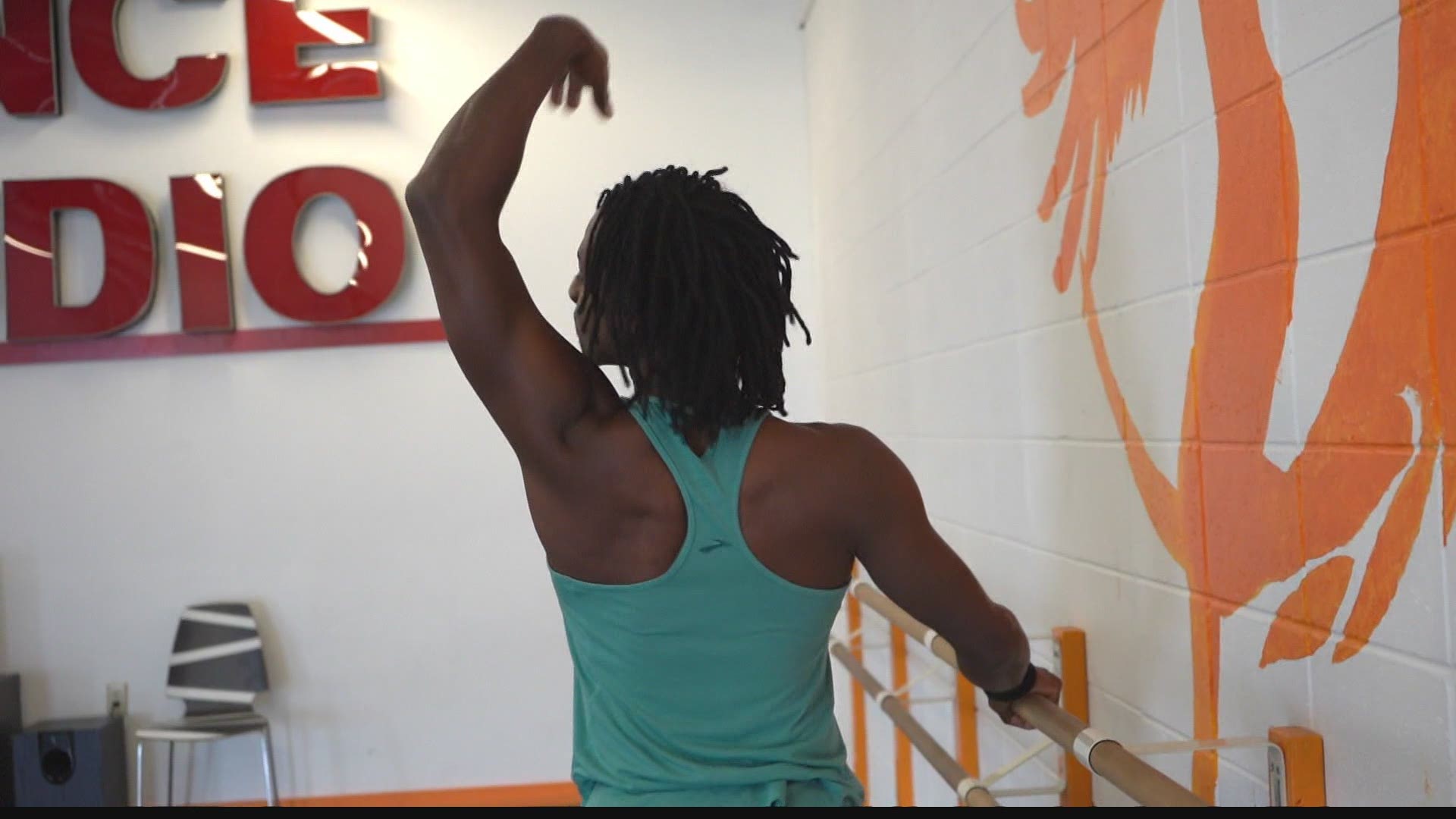 INDIANAPOLIS — Phoenix Rising Dance Studio in Indianapolis is more than just a unique name for owner Justin Sears-Watson's business. It personifies everything that a rising symbolizes.

Sears-Watson, a professional dancer, exudes a welcoming presence. Even before removing his face mask for a socially-distanced sit-down interview with 13News, it was clear he was smiling from behind the cloth which had "Love" imprinted across the front.

This creator and entertainer is intrinsically aware of every muscle and every fiber within his body.

When asked about the darkest times in his life, Sears-Watson lengthened his spine, lowered his shoulders and simultaneously let out a loud audible sigh.

“Oh, I’m not ready to talk about that yet,” he said, shaking out his arms.

Stress, pain, anger, fear and trauma can find a physical hiding spot in the body. Understanding and processing emotions can be cathartic, a means of minimizing the risk to our mind, spirt and body.

Sears-Watson said dance is his therapy.

Choreographing his movements with purpose and elegance is how Sears-Watson has risen from the ashes of his past to become a professional dancer, choreographer, artistic director and owner of a dance studio.

“My youngest brother (was) on the phone after he had murdered his wife and another man before he decided to kill his self. I had a conversation with him before he took his life. That was one of the hardest losses in my life,” said Sears-Watson, pausing notably between words.

“Had it not been for me being able to translate that experience into a work of art that allowed me to release the guilt, the shame, the sadness and the grief, I believe and know that I would have drowned in that grief,” said Sears-Watson.

Processing the pain through movement has freed him to continue to rise through life’s challenges.

“I have to get this out of me because I don’t have the words. A lot of time there aren’t words to express the experiences that we have,” he said.

And dance is “a way to release it and really move past anything that would hinder me from becoming my most powerful self,” said Sears-Watson.

“I was raised in foster care, so the arts have completely changed my life and have been this constant in my life,” said Sears-Watson. When he was ten years old, he and his brothers were placed in a foster home together and were there for eight years. Sears-Watson said his foster mother was a consistent, kind woman.

The ten years before his life in foster care were where he witnessed addiction and survived physical abuse, homelessness and bullying by his peers.

“Not eating, looking in the fridge, there’s nothing there, going days without eating, not having running water,” said Sears-Watson.

He said the power of art helped him use his past to empower himself.

“It has brought me from some of the deepest darkest places in my life, to the most profound and highest places,” he said.

“When I think back on a common thread that has connected me to the arts,” Sears-Watson is returned to a time before foster care. He said he was about nine years old and attending a camp at the community center.

“One of the counselors gave me a tape that had a song on it called ‘God Made Me Thumb-body Special,’” said Sears-Watson as he moved his thumbs up and down in a nod to the play on words.

“There was, like, this little thumb dance that went with it,” he added.

“It was interesting because at the time, I didn’t realize why that tape meant anything to me. And if I remember correctly, I couldn’t even play it at home because I didn’t have a way of listening to it. So at this community center, I was able to listen to it,” said Sears-Watson.

He said he remembers feeling connected to the song and its message but also wondering “if God made me thumb-body, or somebody special, then why am I...why do I have to go through this," recognizing that there were other kids who were having a different life experience during their childhood.

“So I remember I used to question that, but the more I listened to it, I thought ‘Oh well, if I’m not different, if I am special, then maybe somehow all this will change,” said Sears-Watson. “And I remember thinking at that time, I guess I’m special.”

Art and music was also part of that message.

“That tape and music made me love music and singing, because I had an emotional connection to it,” said Sears-Watson.

“I think that was the first time I had an emotional connection to music and therefore art because it had the power, through those lyrics, through that music, to make me see outside of my circumstances (and it) made me believe something outside of what I was experiencing.”

The power of dance

He takes a moment “as abstract as an emotion or idea” and transforms it by processing it and “getting it through you into the world. It’s a release, it’s cathartic,” said Sears-Watson. That process has a ripple effect on audiences.

“When you see a dance, it’s very visceral. It’s athletic, whether it’s smoothly and soft and delicate or whether it’s loaded and heavy, everyone can feel hear, taste, touch in some way those things that are happening,” he said.

Sears-Watson always had a passion for music. After being wait-listed for a theatre course in college, he enrolled in a ballet class. He discovered a passion he didn’t know existed.

"At any given moment, we can choose the life we lead," said Sears-Watson.

He said that each morning, he rises as a phoenix and that all of us have the ability to pivot and change at any moment.

Since discovering his love for dance in college, Sears-Watson has formally trained in ballet, jazz, musical theatre and African and contemporary dance. He said performance art can serve as a reminder that we’re all just souls having a human experience. In such divisive times, the arts “is where we find the commonalities there, in that moment. That’s powerful, especially in a time like this where there is so much separateness and division, it’s the arts, it’s dance, it’s music that helps us realize that we are just all human,” said Sears-Watson.

Art has allowed him to embrace life at its truest potential, and by sharing his gift, he hopes to inspire others to do the same.

Sears-Watson is launching a new project in 2021 called the Black Ops Dance Project, focused around telling the stories of people of color. The project is “currently in the assessment and investigation phase of the process” and will begin in January. The first show is planned for the spring. He is applying for grants and fundraising.

Click here to learn more about his not-for-profit and professional dance company or see @phoenixrisingdance on Instagram.