An Indiana couple who said a Russiaville tax service refused to do their taxes because they're in a same-sex marriage says they're getting support from others. 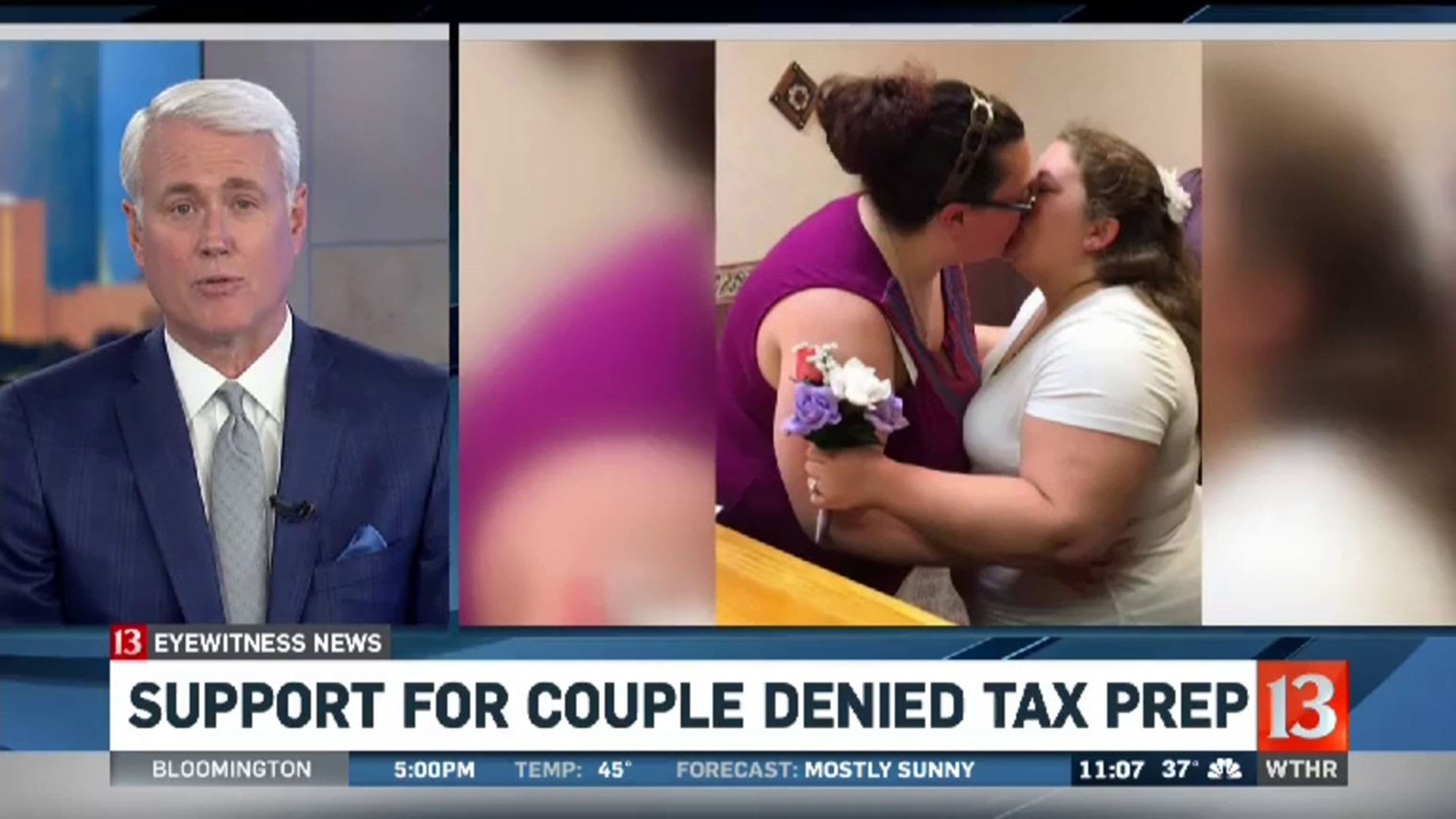 RUSSIAVILLE, Ind. (WTHR) — After getting married in July, Bailey and Samantha Brazzel were preparing to file their first joint taxes.

They went to the same person Bailey has used the last four years, Nancy Fivecoate, who owns Carter Tax Service in Russiaville.

"We thought it was just a boring trip to the tax office, but it turned into a lot more than that," Samantha said.

"We went in and sat down like we always would and (Fivecoate) said 'How are you filing this year?' and I said 'married joint' and that's when it went downhill," Bailey said.

They say Fivecoate refused to do their taxes because they were married.

"I didn't go in there to talk about my marriage," Bailey said. "I went in to file my taxes, that was it...it's all I wanted."

Reached at her office, Fivecoate said "the problem was not being gay, it's being married."

She said she declined to provide tax services based on her "religious beliefs...I am a Christian and I believe marriage is between one man and one woman."

She then shared the following statement:

"On Tuesday, February 12, 2019 I had a client with an appointment come in to have her taxes prepared. I have prepared her taxes for several years. This year she came in with her wife and I declined to prepare the taxes because of my religious beliefs. I am a Christian and I believe marriage is between one man and one woman. I was very respectful to them. I told them where I thought she might be able to get her taxes prepared.

"A few years ago I had a couple of gay clients that married. When it was time to prepare their taxes they called me and asked if I had a problem since they were married. I told them that as a Christian that I could not prepare their taxes. I thanked them for calling and wished them well.

"The LGBT want respect for their beliefs, which I give them. I did not say anything about their lifestyle. That is their choice. It is not my choice. Where is their respect for my beliefs?

Fivecoate said she received a number of harassing calls and emails, after the Brazzels shared their experience with friends on social media.

"We don't have an issue with her. We don't think she's a terrible person," Bailey said. "But we're not the only ones this happens to and it's wrong and something needs to be done about it."

Bailey was referring to the lack of LGBT protections in Indiana. While several cities across the state have passed ordinances protecting residents from being discriminated against based on sexual orientation, Indiana has no such law, nor does Russiaville or Howard County at the local level.

That means Fivecoate was in her legal rights to deny services to the Brazzels.

"I don't need anyone to agree with my lifestyle or things that I do, but if you're going to run a business, you should be able to work with all types of people," Bailey said.

The couple said while they didn't intend to become activists, they plan to push for change.

"It's not something we were seeking out, but it feels like our duty to say something," Bailey said. "It's about the community and everyone being treated fairly."

After the Brazzels' story aired Monday, Bailey said they've heard from several people offering support for the couple. They have even received offers to get their taxes done and, in some cases, for free.