The challenging reality of taking care of aging parents

For adult children, taking care of aging parents can be challenging. 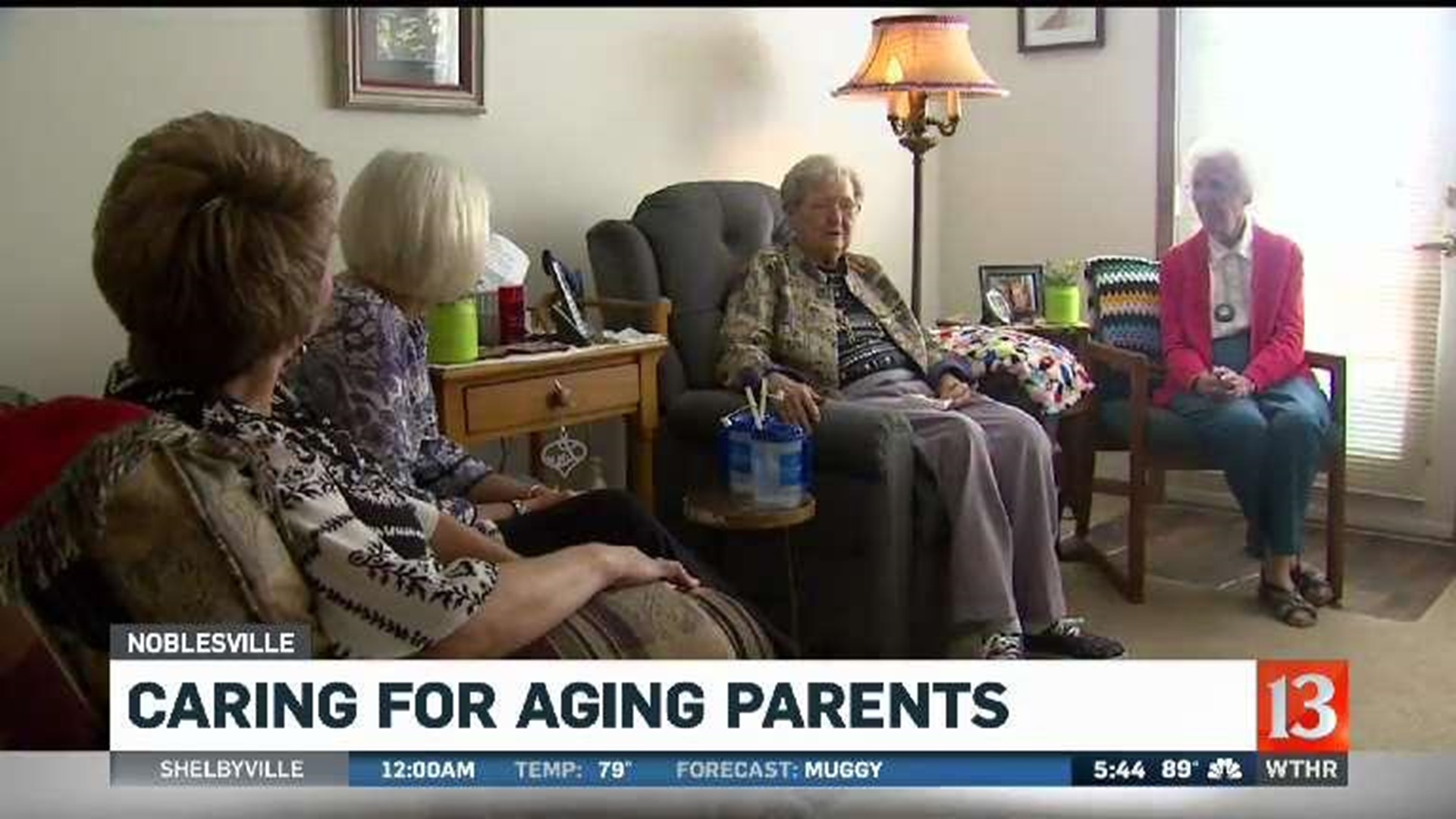 NOBLESVILLE, Ind. (WTHR) – Every Tuesday morning, Janet Leonard and Patrice Lyttle get together for coffee and conversation. They have known each other more than 50 years. Now, these two women are on the same journey.

"Taking care of my mom is a privilege that many are denied," said Patrice Lyttle. "I don't look at it as a burden but a joy."

"Taking care of my mom is a blessing," said Janet Leonard.

Their mothers live at the Five Star Residences of Noblesville.

"They will sit and hold hands and they will talk and tell stories about us. Both of them will tell us what to do. But, they're there for each other," said Leonard.

For adult children, taking care of aging parents can be challenging.

"To watch her struggle physically is hard," said Leonard. "She struggles in her walking. I've gotten calls several times that she's fallen. We have a urologist, we have a cardiologist, we have an eye specialist. We do a lot of doctor visits."

Have the difficult conversations now

Leonard and Lyttle say the transition was made easier because they had difficult conversations with their parents ahead of time.

That is something attorneys recommend.

"Death is a hard subject to talk about," said Anna Howard, an Elder Law Attorney with Severns and Howard. "Do not be afraid to have that conversation now while your parents are healthy. Planning now is going to make that really bad crisis moment just a little less chaotic."

"You need to talk about long term care planning," said Howard. "The reason you want to start talking about it now while they're healthy is your parents are going to be able to talk to you about what their finances are, their assets. They'll be able to tell you if they have legal documents in place or if they don't have any. More importantly, they'll be able to talk to you about their wishes and desires for end of life," said Howard.

"Typically, people don't have those," said Howard. "They consider their documents their will and a living will. The financial power of attorney is very important because we want to be able to go to the bank, to pay the bills, to talk to life insurance companies or maybe a long term life insurance company and get things going. If you don't have a power of attorney, they will not talk to you. A health care power of attorney, that's effective now. It's going to allow your children to talk to the doctors for you, get information and then make those decisions that you've given in the living will," said Howard. "That power of attorney is also going to give you the authority to create that irrevocable trust that mom didn't get around to, to do some gifting to allow for qualifications of Medicaid or VA benefits."

Janet Leonard has those documents.

"I have a three ring binder that keeps all of her insurance, her last will and testament, my power of attorney," said Leonard.

Leonard has also talked with her mother about funeral plans.

"Mom has made her preparations. She has everything planned. And, she wants it done the way she wants it to be. So, she has songs picked out. She has the scripture picked out. She said, 'you have to realize, it's my faith. And, this will be the day that I have waited for all these years because I know I'm going to meet Jesus when i get there and I'm going to get to see your dad again,'" said Leonard.

Being prepared for the financial impact

The hard reality of taking care of an aging parent is the financial impact.

"If your parents have the funds or you have the funds that's wonderful. Most people do not," said Howard. "So, then we start looking is there long term care insurance policy? If people start planning in their 50's and 60's, they can look at long term care insurance and it's a wonderful source to have if you can afford it. For the rest of us who can't afford long term care insurance or aren't able to private pay, there are other benefits out there. There's Medicaid. There's also veterans benefits for veterans and their surviving spouses. But, these are need-based programs. So, that means they're going to look at their resources. In order to qualify, we have to have a plan in place on how to reach those eligibility limits," said Howard.

It can be a financial hardship for adult children taking care of their aging parents.

"Between her social security, the pension and the benefit, we're fortunate that she breaks even every month," said Lyttle.

"It's emotionally, physically, financially, all of that is draining, just because you care," said Leonard. "To watch the savings of your parent quickly drain, mom is in the highest care of assisted living. It's over $5,000 a month. We're at the point of selling her home and going to have Medicaid to come in and help," said Leonard.

Howard says long-term care insurance is an option that can help, though it is expensive. Otherwise, many people look at Medicaid or veterans benefits to offset the costs.

Howard urges adult children to ask their aging parents questions about their assets and their wishes. Howard also encourages people to find an attorney.

"Cost can be anywhere from a couple thousand dollars to $5,000 or $6,000. This is just getting estate planning documents in place. What you pay for that elder law attorney to do this is going to save you so much in the long run," said Howard.

Not having a plan in place and the right documents could be costly and challenging for adult children.

"If your parents passes away and you don't have a will or a trust, it's going to be a little complicated if you don't know what assets they have because you're going to need to figure out the assets to determine if there are beneficiaries," said Howard. "You may have to open an estate. So, you're going to want to get a really good attorney who understands this and can work through it with you."

And, a final piece of advice: Find a friend who can walk the journey with you.