A man playing out a scene for a movie was fired upon by unsuspecting police officers in Crawfordsville Tuesday evening. 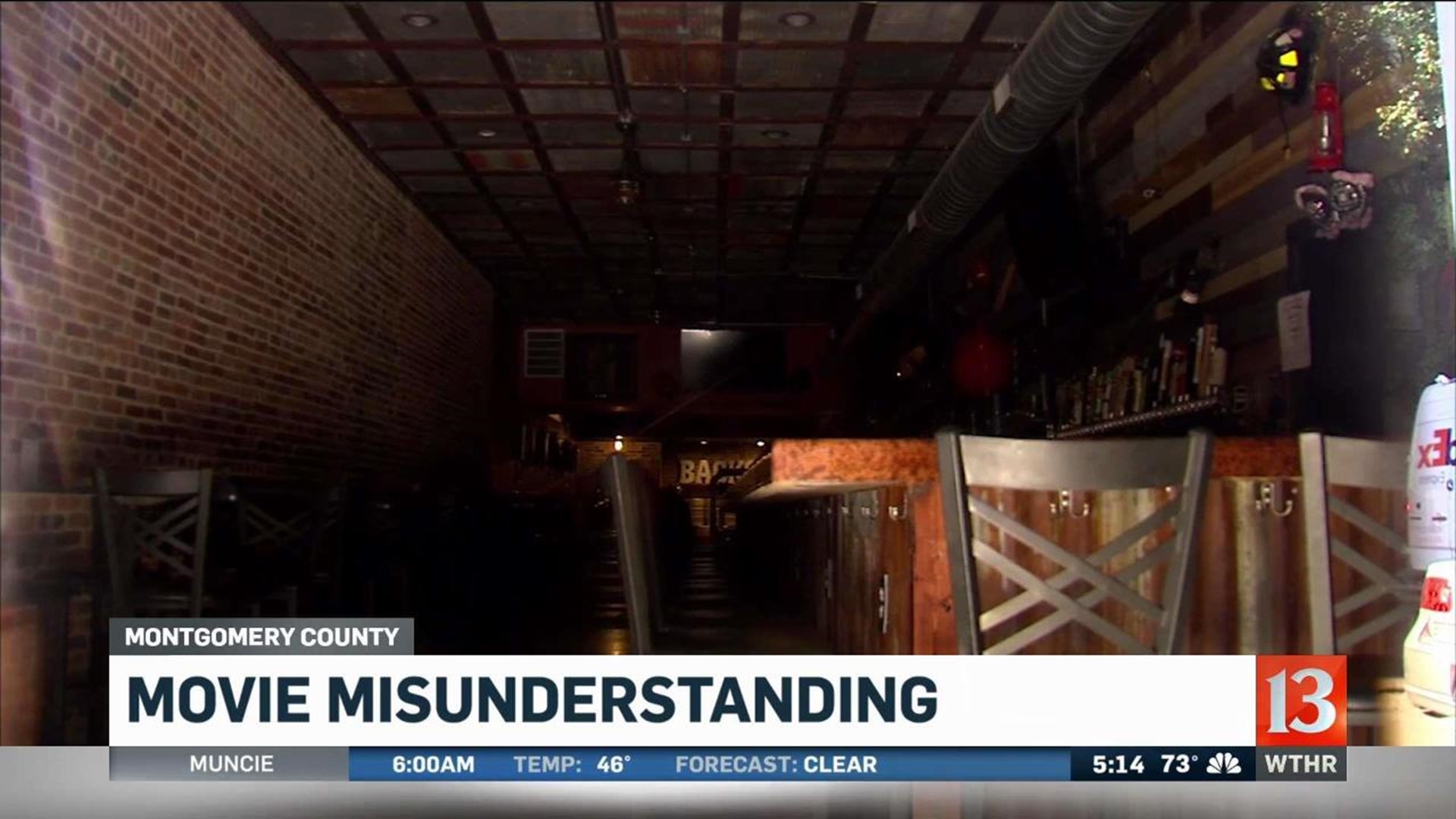 CRAWFORDSVILLE, Ind. (WTHR) - Crawfordsville police received a 911 calls Tuesday night about 7:00 p.m. about a masked man with a gun at the downtown Backstep Brewing Company. The scene might have looked like something out of a movie. And it was... but nobody told the police, who fired a shot at an actor in the near tragic movie misunderstanding.

"I'm still kind of getting over it emotionally, just the fact that it happened in the first place is kind of shocking,” said Montgomery County Movies owner Philip Demoret.

Demoret and actor Jim Duff were playing the roles of masked gunman filming a robbery scene inside the bar for the movie "10 to Fire", expected to be released in late 2018.

“The other person that was playing the other robber ran out the door and disappeared behind the glass, because the glass door is out of frame,” said Demoret. “I turned around to step out and as I opened the door briefly, the shot rang out."

"The bullet flew past his head, so it was a shoot to kill shot I assume,” said Demoret. “Not only that, but I was just about to step out. So, had it been 2 or 3 seconds later of a shot, I might have been right in the crossfire. "I'm just very thankful they were there, even though it turned out they didn't need to be there. They didn't know that. I'm just glad they did their job to the best of their ability. "

WTHR was not able to reach Duff Thursday.

"He tells me he's doing good emotionally, obviously wasn't hit so no physical damage,” said Demoret. “I think I probably would have lost myself out there if it had been me."

"I have the utmost confidence in our officers and their split-second response to the situation with which they found themselves faced."

The micro-brewery bar is closed on Tuesdays when the filming took place. Demoret regrets that he didn’t inform police of the potentially dangerous appearance of his movie set.

“We're working with local law enforcement to help ensure that this does not happen again,” said Demoret. “We've just been filming since 2013. We just kind of go film, and go the next spot and film and do things. Never really thought about it, probably should have. Communication is key. If you communicate with people you run less of a risk of things like this happening. I think that's definitely the lesson to take from this."

Though no one was injured, state police are handling the investigation since the unnamed Crawfordsville police officer fired his gun. Everyone involved in the filming was held at the scene for several hours Tuesday night giving statements. Duff was taken into custody until investigators confirmed he was just an actor.

Demoret will not release any details of the storyline of his second film. Tuesday’s incident might be seen as a rather elaborate publicity stunt for the movie if the situation weren’t so potentially deadly serious.

“We've actually heard that from both sides of the fence,” said Demoret. “I've actually had people that have commented to us and said, 'Oh, I want that movie when it comes out. It better be good for this."

Crawfordsville police have body camera video of the officer who fired the shot that they say clearly shows the incident.

The police also took the movie footage shot from inside the bar as evidence. Demoret says you can hear the shot fired, but cannot see much through the tinted glass doors. The movie makers believe they got the footage they wanted inside the bar Tuesday night and hope police will return the video soon.

State police say neither the production company shooting the movie nor the bar's owners notified police of the filming beforehand.

The owners of the bar posted a statement about the incident on Facebook Wednesday afternoon.