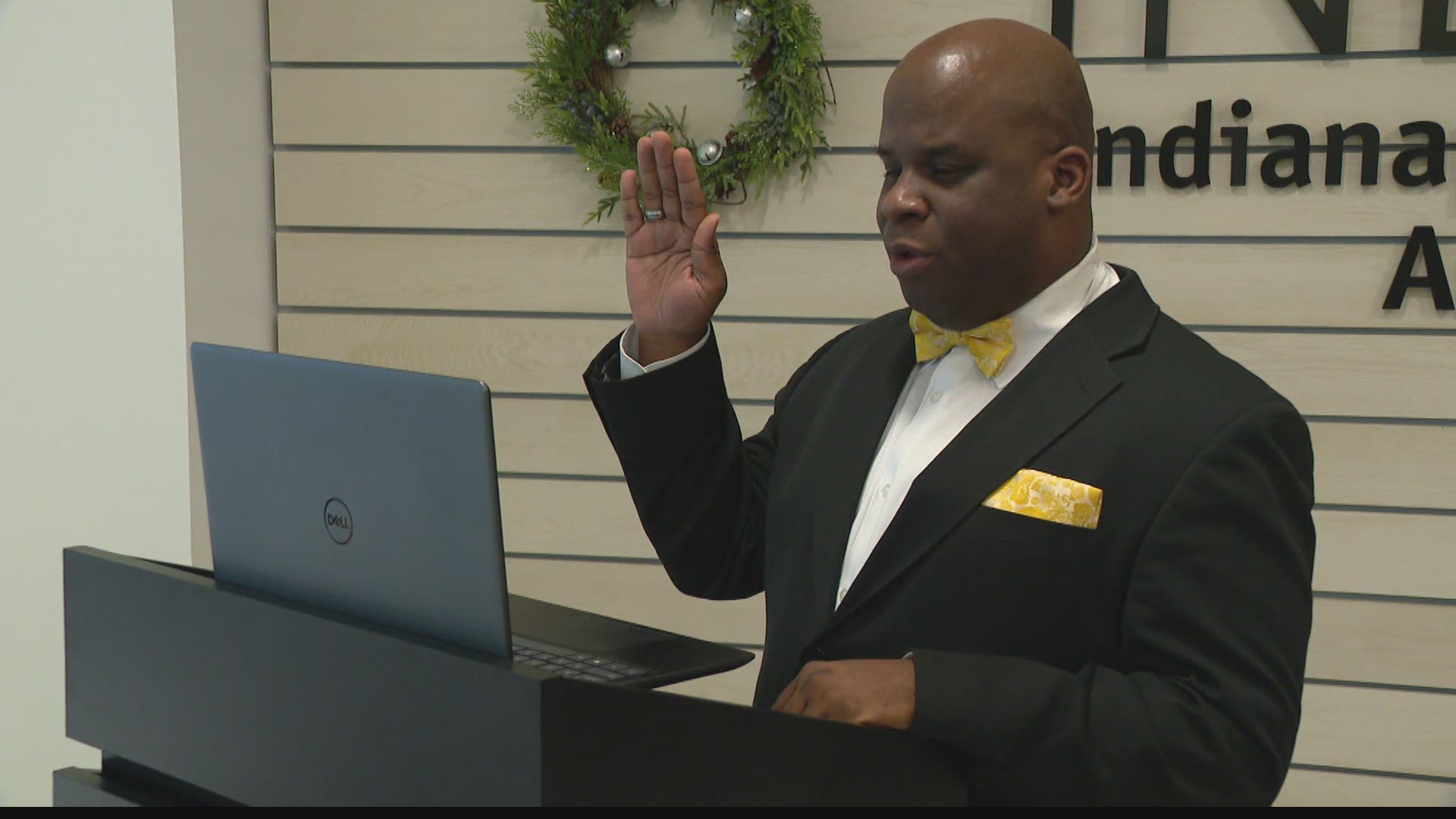 INDIANAPOLIS — Lawyers in Indianapolis and across the state are making history with the appointments of its bar association leaders.

Normally, the swearing-in for the bar association president is done in person. But due to the pandemic, it's all virtual to add to the historic move. The presidents are vetted by election committees from both associations.

As part of the production for newly elected IBA President Jimmie McMillian, his swearing-in was recorded as Judge Sullivan administered the oath of office via laptop.

During a portion of the swearing-in, McMillian repeated these words after Sullivan, "and with due respect for the rule of law, do solemnly affirm."

McMillian also had his acceptance speech recorded, where he gave credit to colleagues, friends and family. He will now serve as the 143rd president of the Indianapolis Bar Association. IBA has a predominately white membership, which also makes his appointment even more meaningful on a personal level.

"It's a bar association that belongs to all lawyers regardless of race, and to be able to be a leader of that says something about where we are right now. It's a positive message," McMillian said.

His appointment coincides with state bar president Michael Tolbert's reign, an African-American attorney in Gary. Tolbert and his wife are both attorneys who attended law school together.

Tolbert and McMillian have been in contact with each other throughout the election process, not knowing if McMillian would be offered the opportunity. The state bar association has thousands of members around Indiana.

"This is something that you can't write," said Tolbert. "We had such a great time talking about it, the things we would try to accomplish together throughout the year."

McMillian takes on the new role adding to an already busy schedule as an executive for the Indianapolis Motor Speedway. Known for his community work, he also splits his time with family as he and his wife raise two young sons. McMillian is also a huge advocate for mentoring. He serves as mentor to countless law school students and aspiring young attorneys. He is also a huge volunteer, accepting speaking engagements to youth-oriented events throughout the year, where he shares his life story about growing up in Chicago and the challenges of college and coming from a home involving domestic violence. He credits his mother for pushing him to live up to his potential. One of McMillian's biggest pride and joys is his two sons, who have excelled in school and athletics.

He told 13News as he steps into the biggest leadership role of his career, he will have Tolbert as mentor. It just so happens the two have more than presidency and skin color in common.

"We are both are members of Kappa Alpha Psi Fraternity Incorporated," said McMillian, "and we both share the love for motorcycles."

McMillian hopes to continue the organization's community work, like classes for law school students and their Ask-A-Lawyer services. He and Tolbert are already planning teamwork. IBA offers study classes to law school students preparing to take the state bar exam at competitive costs, which isn't the case in other areas of the country.

"We are looking forward to working together on some important initiatives," said McMillian.

Eventually, McMillian's swearing-in will be made public. He hopes to increase IBA's presence in the community through the association's foundation.