Some residents of Andrews in Huntington County are swearing off the town's water and town officials say the company responsible needs to pay up. 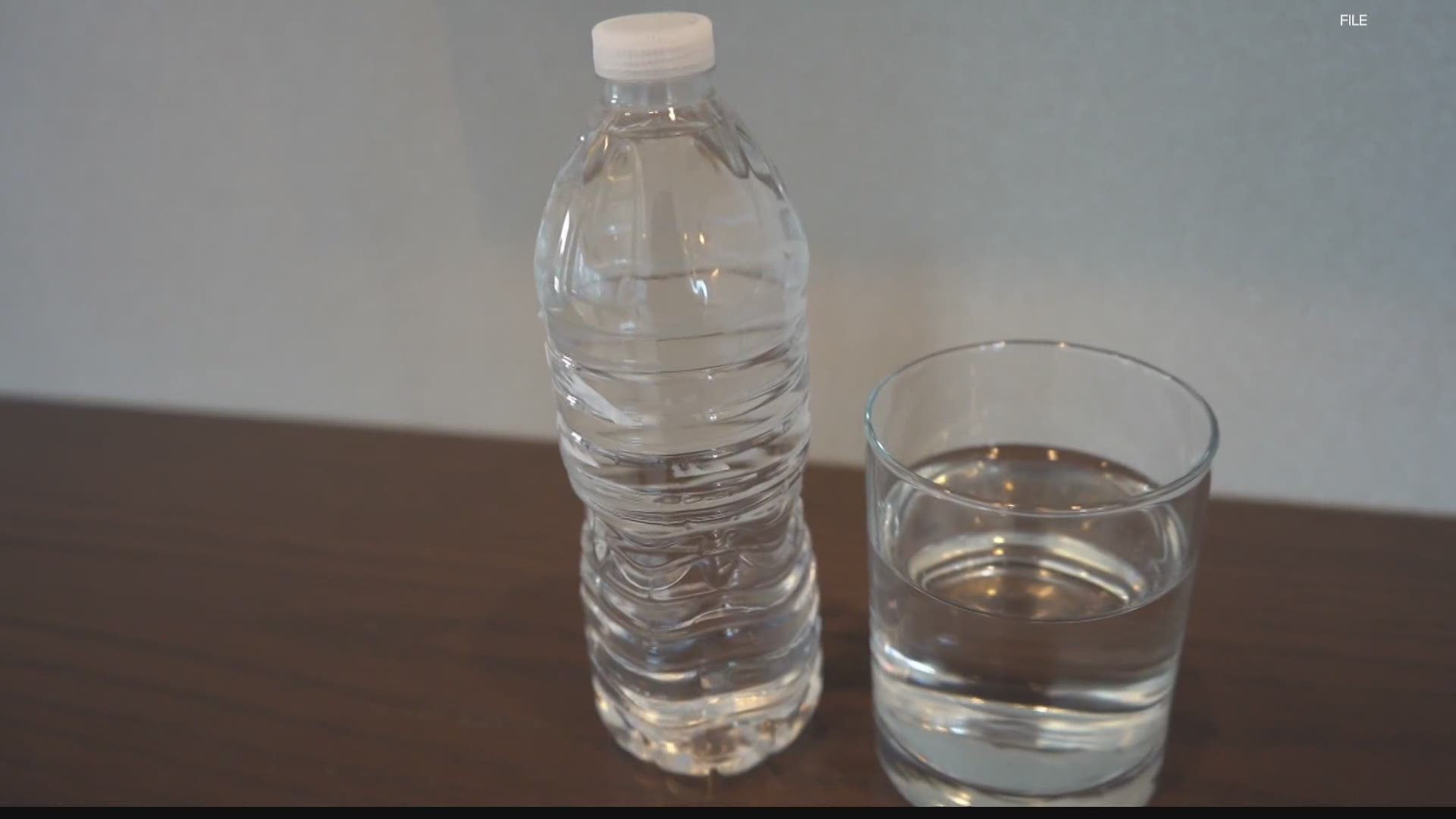 ANDREWS, Ind. — A public health emergency was declared in the small town of Andrews, Indiana. In June, Huntington County Emergency Management warned residents against drinking or using the town’s water. After town officials said record levels of cancer causing chemicals were found in the drinking water. The maximum contaminate level (MCL) of vinyl chloride allowed in drinking water according to the U.S.  Environmental Protection Agency is .002 mg/L because it is a carcinogen. The Town of Andrews said there was “more than 10 times” that amount of vinyl chloride in one of their wells and that the carcinogen was found in all three of the town wells.

“There’s no smell or taste to it. I noticed no different,” said Jody Cormany who has lived in Andrews for the last 16 years. “Residents had to rely on bottle donations during the public health emergency."

“You have to stop and think not to turn the water on to you know, rinse your tooth brush off or give the dogs and water,” said Cormany.

Andrews resident R.B. Jones said it's difficult to go about daily life with bottled water as opposed to sink water.

Residents have been told by the state that the water is now safe to drink, bathe and cook with, but throughout the day residents are still driving up to town hall and picking up free bottled water.

Andrews Town Council President John Harshbarger said the problem is far from over and it’s not just because the carcinogen is odorless, colorless and tasteless but because “it’s still in the wells.”

“We’re concerned about long-term exposure, it’s a carcinogen it can cause cancer” said Harshbarger.

There are three wells in Andrews, and the town depends on them for all of their drinking water. In the center of town several miles away from the well is an old automotive factor. The large blue building has been abandoned and is now used to store burial bins. The town of Andrews said it’s at the heart of the contamination issue. Andrews alleges the contamination issue began nearly three decades ago and originated from pollution left behind from the old automotive factory. The say the multi-billion-dollar corporation that owns that building caused the contamination in their drinking water and should clean up the mess they made.

“We have interviewed many of the former employees of the United Technologies Automotive Plant and a number of them have already testified under oath that they did and were instructed to dump chemicals outside the back of the factory,” said Thomas Barnard partner at Taft Stettinius & Hollister LLP who is representing the town of Andrews. “There was a pipe designed to dump the chemicals right out back on to the ground."

Harshbarger said the town has tested the soil under the old factory.

“There was a thick black liquid pouring out from under the building,” he said. “We want them to fix the problem. ... You polluted it, you replace our wells and move them out of that field and then clean up the mess you made."

It’s a plan the town has been wanting to pursue legally for years. But wasn’t able to until they met Barnard.

“It was only when we found somebody that was willing to step up and help us with this litigation on a contingency basis that we were able to do it, other firms we contacted wanted $500 an hour just to come up and talk to us about it,” said Harshabarger.

But it’s not just the water supply Harshbarger is concerned about, it's also the vapor intrusion.

Andrews said the cost of the intrusion system has been covered by Raytheon. The company has been actively treating the town’s drinking water since 1994 as part of a voluntary remediation program.

On the west side of town, well one is housed in a small light blue building. Down the road from it are well two and three.

“The water comes from our wells over to the air stripper and that’s supposed to eliminate the contaminates and then it comes out of their building into our clear well where it’s aerated again and is pumped into our treatment plant,” said Harshbarger.

He said the town relies on the air stripper for clean drinking water but that the town has zero access to the system.

“It's owned by United Technologies, it’s maintained by them, and we don’t know what’s in it,” he said. “When you put the fox in charge of the hen house, what are you going to get?"

City leaders allege the air stripper malfunctioned in June and that they were never notified, an allegation Raytheon technology denies. In a statement to 13News, the company said: “The air stripper did not malfunction but it was offline for a limited time (about 4 hours) in June when there was a loss of power. “The remaining alarms and temporary shutdown which occurred in June (totaling four in number) were caused by a surge tank reaching its high-level mark. These temporary shutdowns were corrected immediately by the operator remotely."

13News asked Raytheon why the water in Andrews was declared undrinkable in June, if the air stripper did not malfunction during that time.

“It’s important to note that the air stripper is an additional safeguard to the town’s own water treatment system," Raytheon responded.

Raytheon Technologies also pointed the finger towards Andrews and said the town reactivated a production well that had been offline since 2012 without notifying them.

“Importantly, had we been made aware of the new pumping configuration by the town in early May, the town’s water needs could have been effectively addressed," the company said.

The town council president said Andrews had a “loss of volume in wells 2 and three so we had to put one back on. And one is the one that’s polluted however we’ve been doing that over the years. We’ve never been told to shut well one down, because United Technologies and Stantec is supposed to be keeping everything out of our drinking water."

“There stripper is supposed to take care of it. If we do have something (contaminates) down there, which we know we do in all three wells. If it’s working properly we shouldn’t have to worry about it,” said Harshbarger.

Longtime residents, some of who worked at the automotive plant, told 13News they had suspected the city’s drinking water was being treated for chemical waste. But newer homeowners who weren’t around when the automotive plant was an active site employing many of the town residents said they were completely taken off guard.

Jones has lived in Andrews for the last six years.

“No ma’am (I had no idea), and a lot of other residents had no clue either on what the contamination has done and what the water situation was,” Jones said.

“It’s been talked about for the last probably 27 years now in council meetings,” said Harshbarger.

Andrews has their council meeting minutes from the last seven years online and the earliest mention of the voluntary remediation program in these notes can be found in the minutes for April 14, 2014.

"To help build confidence in the system for town residents, we have offered to take several immediate steps to further assure them that they will continue to have access to clean, safe water," Raytheon said. "While it is the town’s responsibility to maintain and service all of its water production wells, if the town agrees, Raytheon has offered to thoroughly clean two production wells; service the town’s water pumps in those well; arrange temporary pumps during the cleaning and servicing to maintain capacity’ and provide bottled water if supply is impacted during the servicing period.”

“We got through the current crisis we lifted the order, but every time that air stripper goes down our water is untreated at that point,” said Harshbarger. “You polluted it, you replace the wells and move them out of that field."

Raytheon said all finished drinking water samples tested by them and the state to this point have met federal Safe Drinking Water standards.

But Harshbarger said it shouldn’t be about whether the levels of carcinogens are low enough to drink.

“If I set a glass of water on the table and tell you that that (vinyl chloride) that’s in there, but it’s below the MCL and set a bottle of water beside it, which one are you going to take?” he asked.

He said it’s not just the water he’s concerned about, but the vapor intrusion.

"Even this building right here (town hall) has a vapor intrusion system on it to draw the contamination out from under it,” he said.

Harshbarger said Raytheon has covered the costs for those systems but alleges routine maintenance of the systems is missing.

Andrew has filed an emergency motion for a preliminary injunction in Huntington Superior Court.