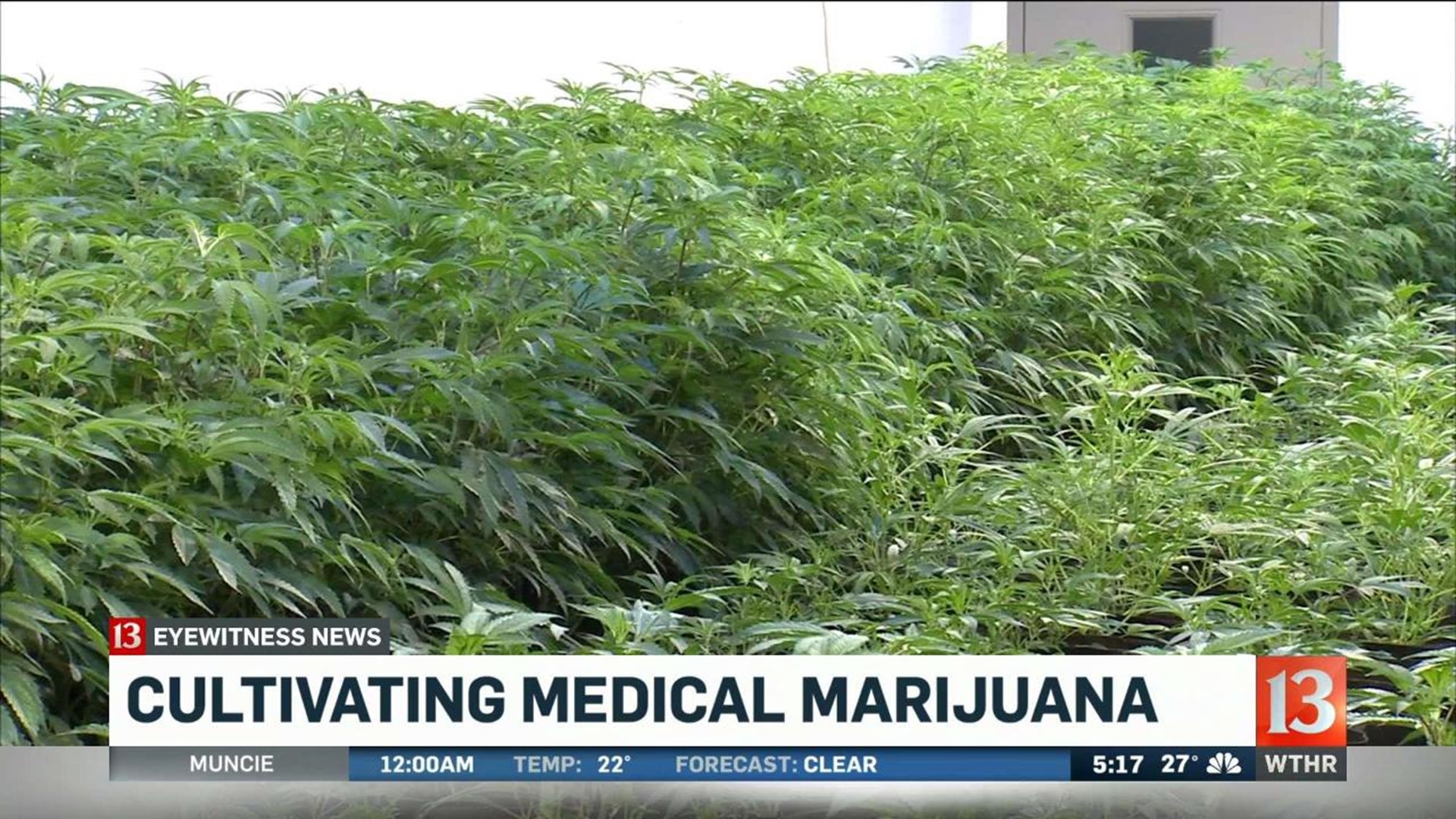 INDIANAPOLIS (WTHR) - It's expected to be a hot debate at the Indiana Statehouse in the upcoming session: Whether to legalize medical marijuana.

One lawmaker is drafting a bill to make medical marijuana legal here. Republican State Representative Jim Lucas recently traveled to Illinois to see how the program works there. We got permission to tag along.

Our first destination was Cresco Labs, one of the largest cultivation centers in Illinois. It grows, prepares, packages and delivers medical cannabis to licensed retail dispensaries across Illinois.

It's located in an industrial area just outside Joliet. The white, 40-thousand-square foot building is surrounding by a 10-foot cyclone fence and restricted entrance. There's no signage and no indication what goes on inside the building. That's by design. State law prohibits growers from advertising or promoting their product and that includes signage.

Inside, Jason Nelson, Cresco's director of cultivation, leads us on a tour. We go through double-locked doors to get to the surveillance room. Pointing to the monitors, he notes Cresco has "150 cameras on every corner of the building and the exterior," with a live stream available to state police 24-7.

If a server or camera goes down, the facility has to shut down until the problem is fixed. Cresco and other growers are also required to maintain six months of footage from all the cameras in off-site storage.

Nelson takes us to the first of several growing rooms. It looks pretty much like any other indoor greenhouse. There are rows of leafy plants, grow lights, fans blowing and automated feeding and watering systems. There's also an employee who's busy pruning plants. She's wearing a lab coat, hair net and gloves to "prevent any contamination of the plants."

Nelson also points out that each plant has a bar code that stays with it from start to finish.

"Any time this plant moves, it gets transplanted, anything happens to it, it's tracked via its own individual number. To be able to take part in the medical marijuana program, it is the most highly restricted and regulated program of its kind in the country from tracking live plant material to finished inventory to manufacturing and distributing."

Nelson, who has a Masters in horticulture, said there are 2,000 plants in various stages of growth at any given time in the facility. Cresco grows many different strains, which he said produce different therapeutic effects used to treat patients with one of 40-plus medical conditions including cancer, glaucoma, PTSD and Parkinson's Disease.

The plants are ready to be processed after four-and-a-half months and it's the flower or bud that's used.

Once the plants are dried and cured, each bud is inspected and trimmed. What's not used. including the stalk, stems and leaves, must be weighed, catalogued, reported to the state and locked up.

"After seven days, I can have it ground, mixed with soil and rendered unidentifiable," Nelson said.

The flowers are then turned into product in form of oils, vapes, liquid extracts, sprays, tonics, concentrates and edibles - from brownies to entrees to gummies, their best seller.

Before any product leaves the door, it's tested first by Cresco and then a third-party lab to make sure it meets the state's quality standards. Nelson said getting to this point was a multi-million dollar investment.

"It has been challenging in Illinois with the restrictive patient count, but yes, Cresco is successful," he said.

Lucas finished the tour convinced a similar program can work in Indiana.

"That's the beautiful thing about that," Lucas said. "We have 29 states that are doing this, Indiana doesn't have to start over. We can take what's working for Illinois and see if we can apply that to Hoosiers."

The next day, we followed Lucas To PDI Medical in Buffalo Grove, which sits in a non-descript office park.

Upon entering Lucas said, "this looks like any other doctor's office."

But as Lucas knows, it's not. PDI Medical is one of 53 dispensaries in Illinois licensed to sell medical cannabis.

Lucas had arranged a tour of the dispensary. He was joined by advocates, the town's police chief and even a state inspector charged with enforcing the rules.

While we were allowed to stay in the lobby, we were not allowed to join the tour. We weren't patients, weren't authorized by state regulators to do so, but we could take video through the glass door.

We saw part of the pharmacy and some products on display including pipes, as well as hot cocoa and pretzel hugs infused with cannabis.

The dispensary is small, just 2,000-square feet, but it's well-protected. All the glass windows, the door, even the walls are bullet-proof. And like Cresco, surveillance cameras are all over, providing live feed to state police and state regulators.

"They can click on and see what's going on in our dispensary 24-7," said PDI CEO Joseph Friedman, adding "cameras have to be high quality enough to zoom in and see facial features and license plate numbers."

Like Rick LePow's. LePow began coming here after three failed back surgeries. Initially hesitant to try marijuana, he says he was desperate to get off prescription pain killers.

"I have a lot of metal in my back and I have numbness in my left leg so I use this product primarily for sleep and pain alleviation because I'm in constant pain," he said.

Patients like LePow are allowed up to two-and-a-half ounces of medical cannabis every two weeks. They can choose to take it in capsules, nasal sprays, topicals, edibles and joints. LePow uses a vaporizer.

"It puts me to sleep, I don't feel pain," he said. "This program is a miracle.

But medical cannabis is not covered by insurance. It's cash only and it's not cheap. Friedman said it costs between $300 and $400 an ounce. Plus, to qualify for the program, Illinois requires not just a doctor’s approval, government issued ID and proof of residency, but fingerprints for a criminal background check.

"What's the reason for that?" Friedman said. "We're treating cannabis patients like criminals and we're the only state in the country doing that."

He believes that's a big reason why the patient count across the state is much lower than expected, adding "we're barely covering our expenses."

Still, he's hopeful that will change as lawmakers become more comfortable with the program. The state rep from Indiana already is.

Lucas attended a lunch afterward joined by three dozen people. They include patients, advocates, people who work in the industry, Illinois lawmakers and state regulators.

“As long as I'm a legislator I will not give up until I can bring this medicine to our state and Illinois does provide a great roadmap for us to follow,” he told the group.

No matter, Lucas faces a tough battle from opponents, including Indiana Attorney General Curtis Hill and a group of county prosecutors who say marijuana is not medicine and legalizing it is wrong for Indiana. Look for the debate to heat up next month.