"Few of us are ever called to make that kind of sacrifice but all of us are eternally grateful that Cpl. Sanchez did," Indiana Governor Eric Holcomb said. 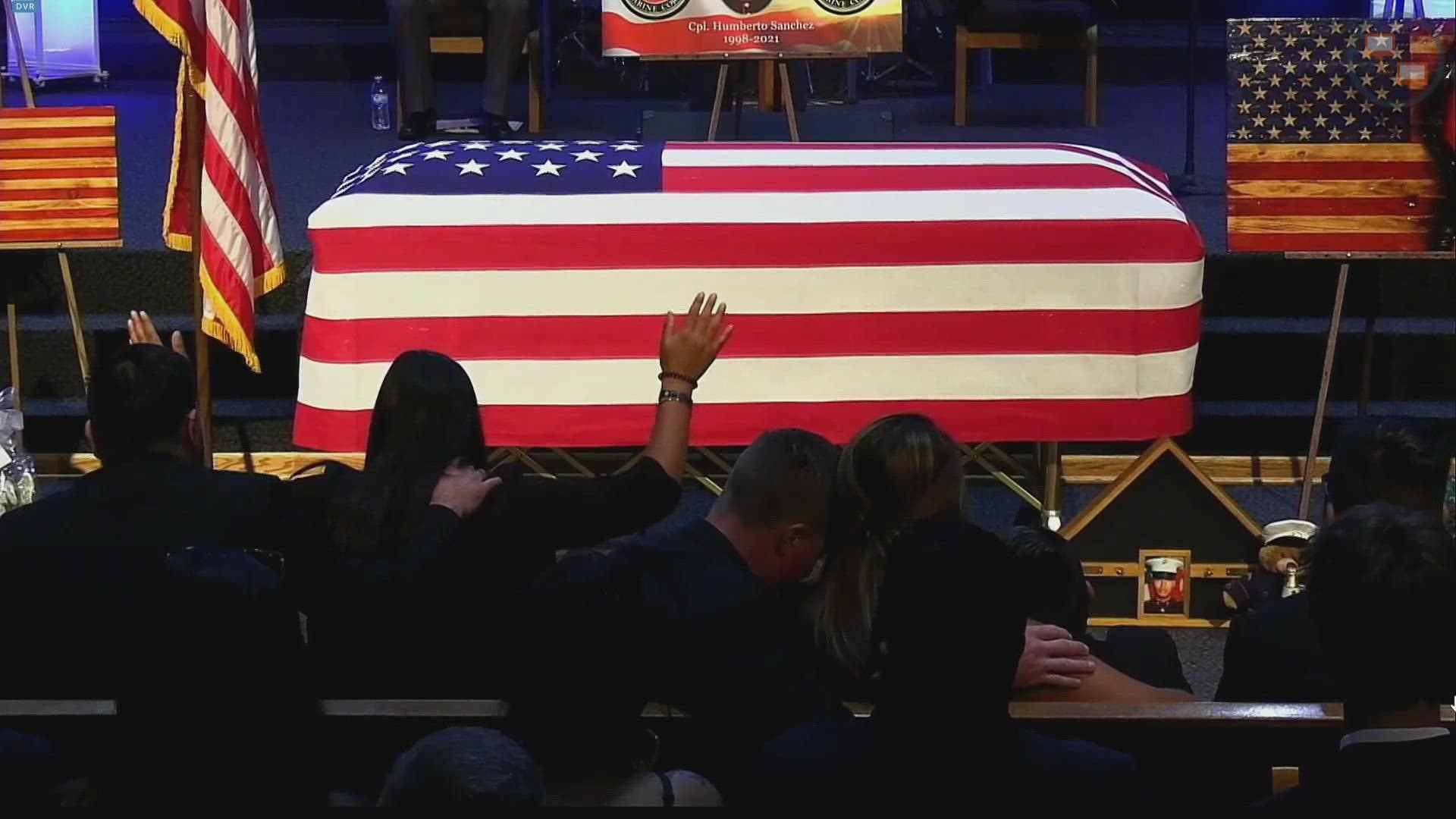 LOGANSPORT, Ind. — A 22-year-old U.S. Marine from Indiana was remembered as a hero during a funeral in his hometown.

Corporal Humberto Sanchez from Logansport was among 13 U.S. service members killed in August in a suicide bombing at Afghanistan's Kabul airport during the U.S.-led evacuation.

"As the Chaplin just mentioned, scripture says, 'There's no greater love than this: to lay down his life for his friends,'" Indiana Governor Eric Holcomb said at the funeral. "How much greater is that love when a life is given so unselfishly, in a cause that began when he was just two years old, for the freedom and safety of millions here at home and abroad. Few of us are ever called to make that kind of sacrifice but all of us are eternally grateful that Cpl. Sanchez did."

Credit: AP
This undated photo released by the 1st Marine Division, Camp Pendleton/U.S. Marines shows Marine Corps Cpl. Humberto A. Sanchez, 22, of Logansport, Indiana. Eleven Marines, one Navy sailor and one Army soldier were among the dead, while 18 other U.S. service members were wounded in Thursday Aug. 26, bombing, which was blamed on Afghanistan's offshoot of the Islamic State group. (U.S. Marines via AP)

Former Vice President Mike Pence was also among the mourners at Life Gate Church on Tuesday in Logansport.

"He gave his life defending innocent civilians fleeing from the chaos that had become Afghanistan," Pence said. "He specifically stood his post, aiding vulnerable adults and children at the airport fleeing for safety."

Pence, a former Indiana governor, said Sanchez's sacrifice will inspire generations of Americans. He called it a "work of heart."

This was echoed in sentiments shared by Indiana leaders who spoke at the funeral, were in attendance, or shared their heartfelt condolences over social media.

Marine killed in Afghanistan laid to rest in Logansport

Attorney General Todd Rokita was another one of the many leaders in attendance.

"It is with a heavy heart I attended the funeral of Marine Corporal Humberto Sanchez today. I know all of IN joins me in expressing deepest condolences to loved ones grieving the passing of this brave hero. His sacrifice will not be forgotten," Rokita said in a social media post Tuesday.

It is with a heavy heart I attended the funeral of Marine Corporal Humberto Sanchez today. I know all of IN joins me in...

Sanchez, known as Bert, was among 17 members of his Logansport High School class who joined the military after their 2017 graduation.

"Bert's journey around the world began that day when he raised his right hand and took an oath to carry out the plan of the day; no matter where, no matter how dangerous," Holcomb said. "And those who knew him and who raised him couldn't have been prouder. Wherever duty sent him, he went. Whatever the challenge, he met it head-on. And ultimately, in everything he did, Cpl. Sanchez gave everything he had."

The service capped days of heavy emotion in the north central Indiana community.

Thousands of people turned out on Sunday, Sept. 12, as Sanchez was brought home from Grissom Air Force Base through the streets of Logansport to LifeGate Church.

In a powerful moment, a crowd of military members standing along the procession route were seen slowly raising their hands in salute as the hearse carrying Sanchez's body home on Sunday passed by.

These service members were just some of the many crowds of people standing along the route, all waiting for the hearse to pass by so they too could pay their respects to their hometown hero.