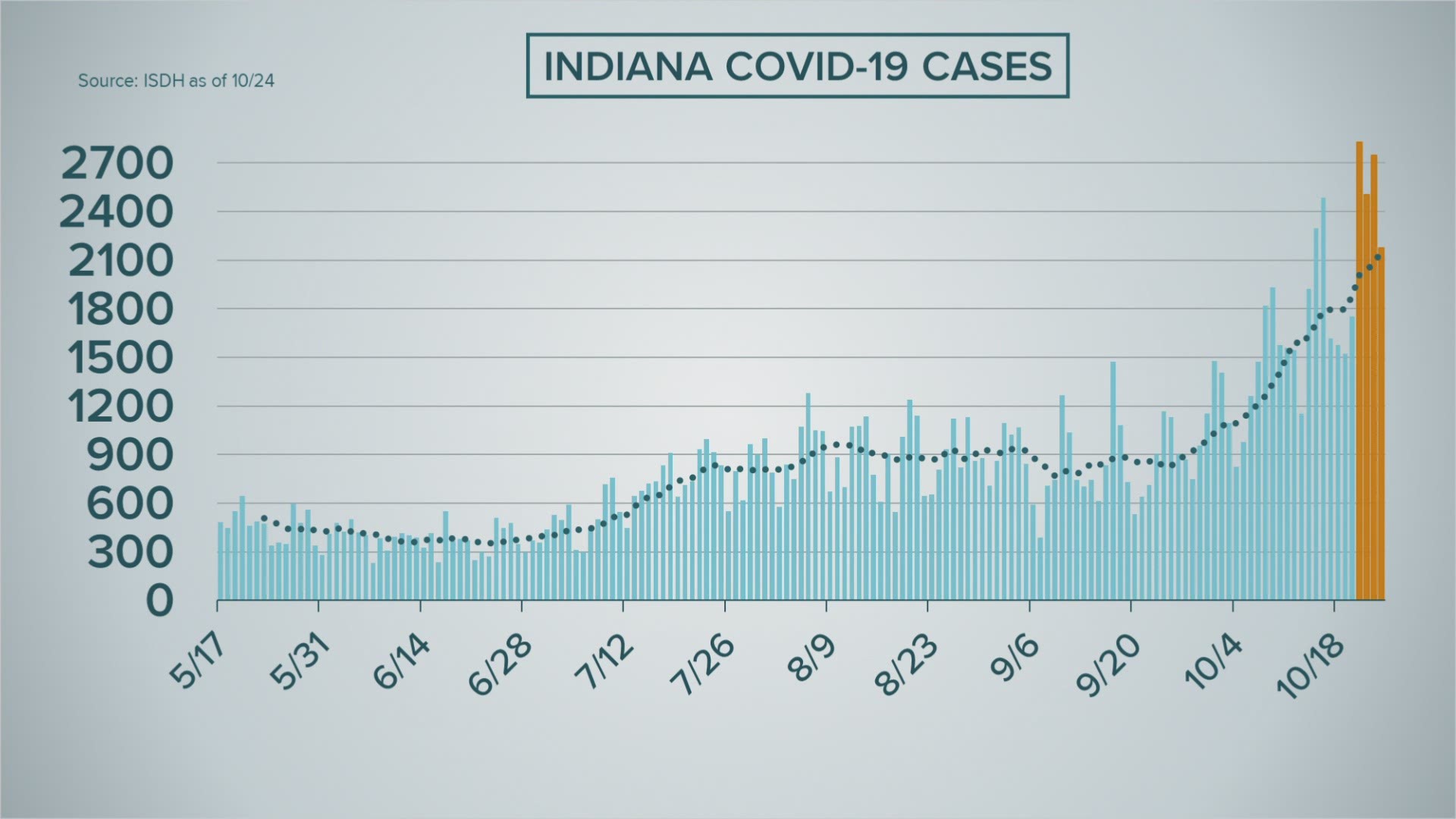 Gov. Holcomb gets tested for COVID-19 after Pence visit

Following the news that Vice President Pence's chief of staff tested positive for COVID-19 and his recent visit to Indiana, Gov. Holcomb has been tested out of precaution.

Holcomb's press secretary tells 13News that the governor was tested earlier Sunday and received negative results on both an Abbott rapid test and a nasopharyngeal PCR test.

"Dr. Box and Dr. Weaver have advised Gov. Holcomb that he can resume his normal schedule with vigilance about masking and physical distancing," Holcomb's press secretary said.

Twelve people who died between Thursday and Saturday bring the state's number of confirmed deaths to 3,894.

Nearly 30 thousand new test results were added to the state's database over the weekend, and the seven-day positivity rate stands at 6.9 percent. Overall, since the pandemic began, the cumulative rate of positive tests is 5.8 percent.

An eastern Indiana hospital has added three germ-killing robots to its efforts to combat the coronavirus in rooms occupied by COVID-19 patients. Reid Health began using one of the robots during 2017 at the hospital in Richmond, but it recently added three more, spurred on by the coronavirus pandemic.

The Palladium-Item reports that Xenex’s Light Strike robots are used to sterilize every room after a COVID-19 patient is released.

Russia’s tally of confirmed coronavirus cases surpassed 1.5 million on Sunday as authorities reported 16,710 new infections amid a rapid resurgence of the outbreak that has swept the country in recent weeks.

Russia’s caseload remains the fourth largest in the world. The government’s coronavirus task force has also registered a total of over 26,000 deaths since the beginning of the pandemic.

The task force has been reporting over 15,000 new infections every day since last Sunday, which is much higher than in the spring, when the highest number of daily new cases was 11,656.

Despite the sharp spike in daily new infections, Russian authorities have repeatedly dismissed the idea of imposing a second lockdown or shutting down businesses after most virus-related restrictions were lifted during the summer. In some Russian regions, officials urged the elderly to self-isolate at home and called on employers to have at least part of their staff work from home. Several regions have shut down nightclubs and limited the hours of restaurants and bars.

Pence to keep up travel despite contact with infected aide

The White House says Vice President Mike Pence plans to maintain an aggressive campaign schedule this week despite his exposure to a top aide who tested positive for the coronavirus.

The vice president's office says that under Centers for Disease Control and Prevention criteria, Pence is considered a “close contact” of his chief of staff, Marc Short, but will not quarantine because he is considered as essential worker.

Worldwide, there have been more than 42.65 million confirmed cases with more than 1.15 million deaths and 28.7 million recoveries.

President Donald Trump assured supporters at weekend rallies that “we’re rounding the turn” on the coronavirus at the same time cases are spiking and the news broke that the vice president's top aide is now infected.

Trump also mocked his Democratic challenger, Joe Biden, for raising alarms about the pandemic. In a rally of his own Saturday, Biden told supporters that he understands the public health reasons for campaigning at a distance.

Underscoring that difference in approach, Vice President Mike Pence’s office announced he would continue with his aggressive campaign schedule after his chief of staff, Marc Short, tested positive for the coronavirus Saturday.