The Marion County Prosecutor announced Monday that an IMPD officer has been charged in connection with a physical altercation that occurred between the officer and a 17-year-old student outside Shortridge High School on August 29. 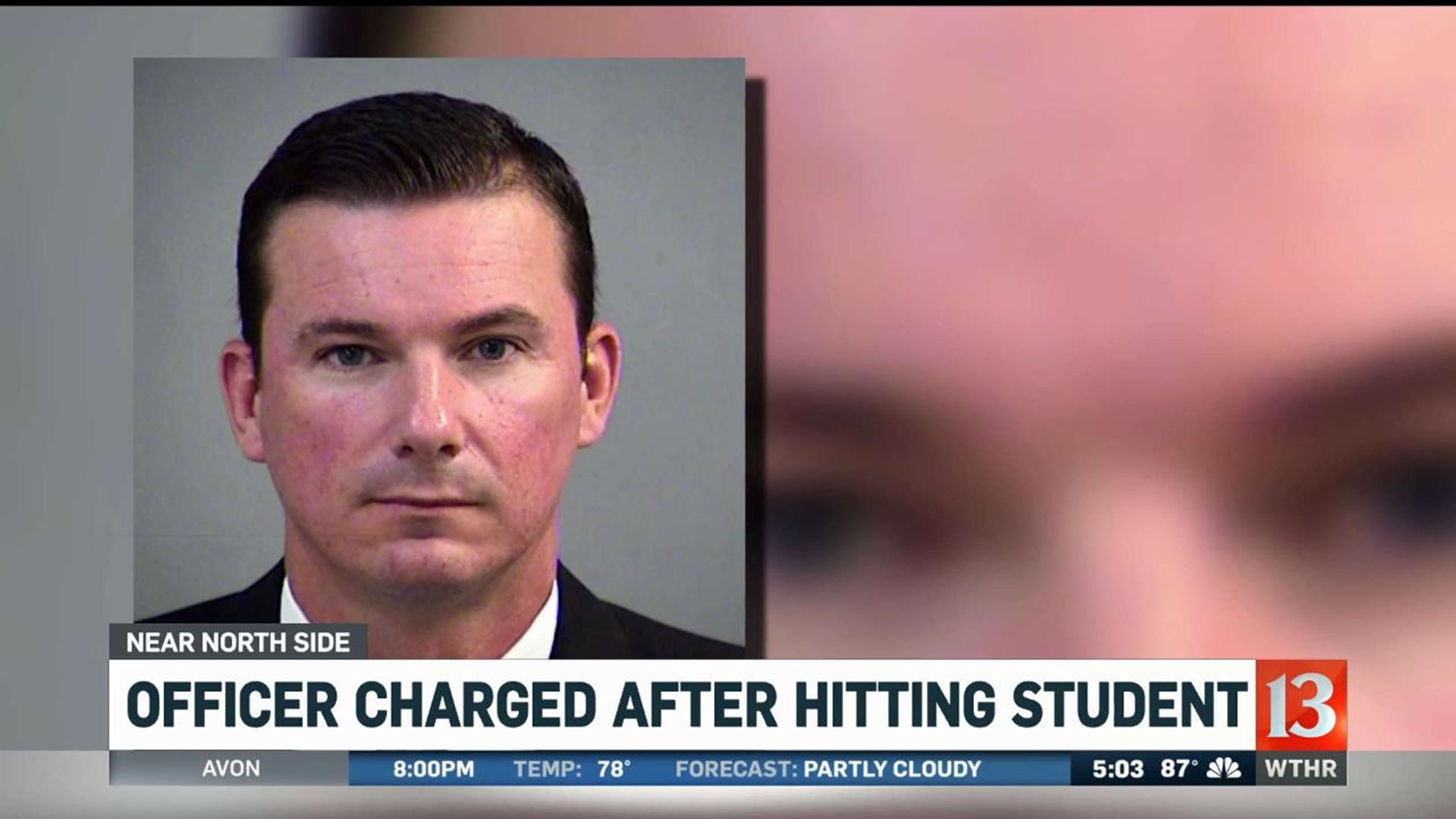 INDIANAPOLIS (WTHR) - An IMPD officer has been charged in connection with a physical altercation that occurred between the officer and a 17-year-old student outside Shortridge High School on August 29.

Officer Robert Lawson has been charged with misdemeanor battery for allegedly striking the student.

Marion County Prosecutor Terry Curry said additional felony charges of obstruction of justice, perjury and official misconduct, as well as a misdemeanor count of false informing, arose from Lawson’s alleged false statements made while reporting the incident in official documentation.

Curry said Lawson is accused of making false statements under oath or affirmation in a probable cause affidavit submitted in support of arrest of the 17-year-old. Prosecutors said Lawson lied about what happened outside Shortridge High School that day and the video clearly shows the difference between what he wrote in his police report and what actually transpired.

The prosecutor's office said in the official documents allegedly prepared and signed by Lawson on August 29, he states that he threw an open-hand palm strike in fear that the 17-year-old was about to strike him. Prosecutors said video of the altercation shows he actually used a closed fist, essentially a punch. They say he also kneed the student in the chest or abdomen after the punch, none of which was included in his written police report.

Further, according to the charging documents filed Monday, Lawson reported that another officer present for the incident stated she observed the 17-year-old swing his fist at Lawson a split second before Lawson threw the palm strike.

Curry said in an interview with investigators, that officer denied making the statement that she observed the 17-year-old swing his fist.

Prosecutors say without the video evidence from the two angles captured on camera, Officer Lawson would not likely be facing charges. They also say the filing of charges should say something to police and the community.

"We are hopeful that this sends a strong message to the community that we take these allegations very seriously, that these matters will be thoroughly investigated," Mears said. "Hopefully the message is that everyone will be treated fairly and that we're going to assess everyone based on their conduct."

During the news conference Monday, Curry also shared a message for the community, unrelated to the officer's conduct. It targeted the conduct of the teenager's aunt, captured on camera that day after she was asked to leave the property.

Indianapolis Public Schools released the following statement about the charges:

“Superintendent Aleesia Johnson and the IPS Board of School Commissioners are supportive of the decision made today by Prosecutor Curry. We will continue to monitor this situation as it is adjudicated. We will also continue to work with everyone in our community to make sure that all of our children are provided a safe and secure learning environment.”

The IMPD Special Investigations Unit conducted a criminal investigation into the events that occurred at Shortridge High School on August 29, and presented findings to the Marion County Prosecutor’s Office. After the filing of formal criminal charges by the Marion County Prosecutor’s Office, Officer Robert Lawson has been placed on suspension without pay, with a recommendation of termination to the civilian oversight Merit Board.

We strive to hold ourselves to a high standard and will continue to review this incident and others to identify ways we can improve as an agency. The women and men who serve our city remain focused on building trust with our neighbors and working together with the community to make Indianapolis a safer place for every resident.

The attorney for the teen's family, Terrance Kinnard, released the following statement:

It has come to my attention that criminal charges were filed today against IMPD Officer Robert Lawson. We believe the filing of charges was appropriate under the circumstances. We respect and trust in the judicial process and look forward to seeing a just result in the criminal matter as well as in our pending federal litigation. Out of respect for the state and federal judiciary, we will have no further comment on pending litigation at this time.

“We are aware of the announcement made today by the Marion County Prosecutor. We recognize such a decision is not made lightly and have confidence in the criminal justice process.

As this matter moves forward, we continue to gather further information as to the specific details that led to the Prosecutor’s decision.

Our city’s police officers are professionally trained and held to high standards inclusive of public, peer and judicial review. These prescribed steps are in place and should be based upon facts and due consideration. In such instances, we see all too often the value of ensuring a full review and fair process for anyone involved, including the accused; whether a citizen, an elected official or a police officer.

Everyone in our society deserves a fair and impartial review of their actions, including Officer Lawson. In the interim, we ask for our community’s continued support of our police officers while they continue to serve our city and keep us safe.”