Agencies providing options for the city's homeless have been tested by high demand since the beginning of the pandemic. 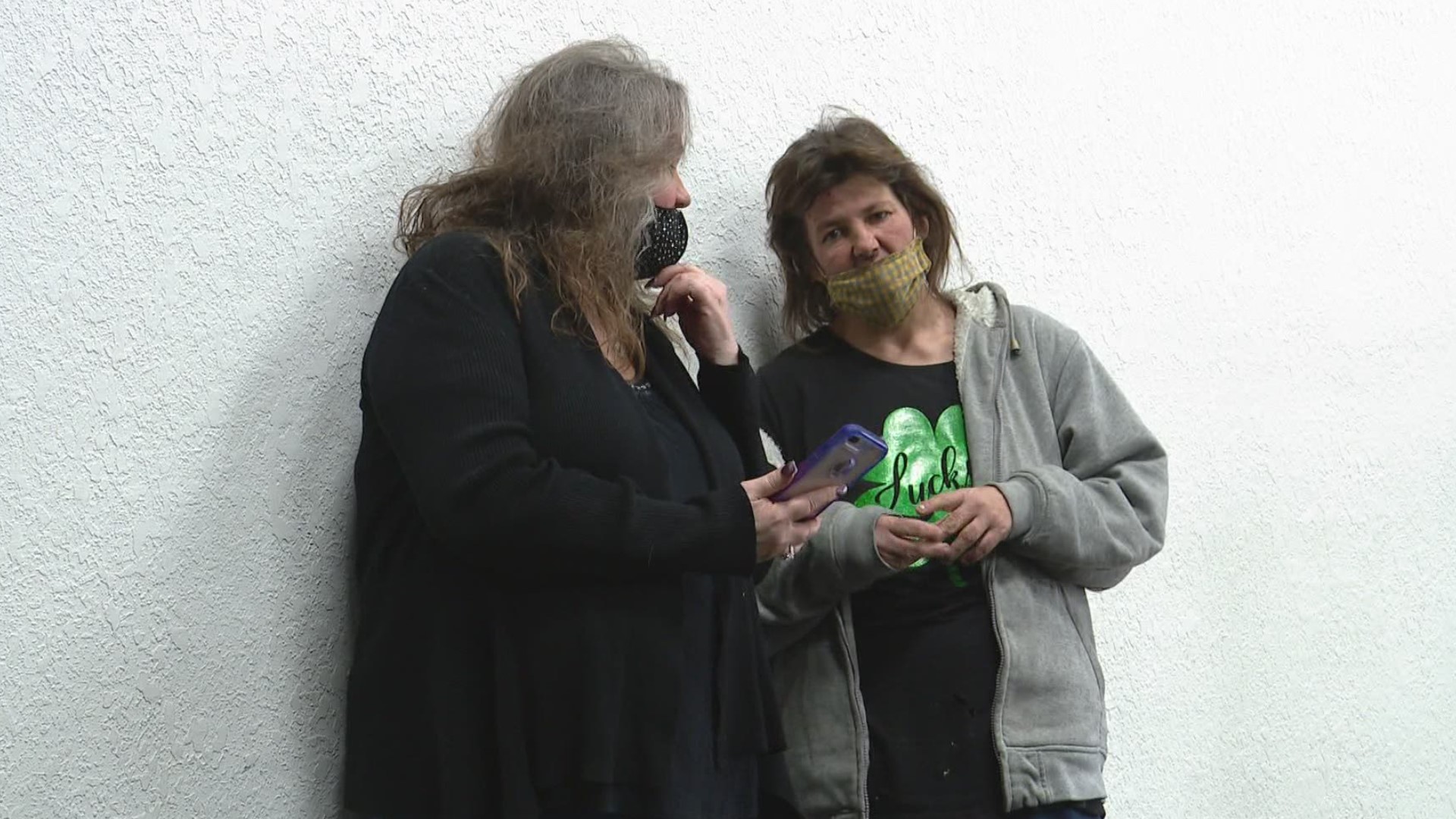 INDIANAPOLIS — Hoosiers experiencing homelessness have been some of the hardest hit during the pandemic.

So when a woman came across a couple in need recently, she decided to help. But it wasn't long before she discovered an obstacle standing in their way.

Inside the lobby of a Motel 6 on Indianapolis' east side, a woman sits quietly, her hands folded in her lap, staring off as people walk in and out, barely taking note of her.

“I’m scared and wondering what I’m going to do next,” said 44-year-old Vanda Turpin.

She is five months pregnant with twins and is homeless.

“You have no bathroom, nowhere to take a shower, no way to eat. It’s horrible,” she said.

It's been the reality for Vanda and her husband Terry for the past two years. They live in a tent, moving from place to place around the city and panhandling to find money to buy food. Their sign says “Homeless. Need help.”

Life wasn’t always like this for the Turpins. They used to live in an apartment in Greenwood with their 13-year-old son.

Around the same time, Vanda says Terry fell off a roof and could no longer work.

“Both of us lost our job and couldn’t pay none of the bills. We couldn’t keep our house and lost everything and had to leave it behind,” Vanda said.

The couple lost their 13-year old son, too.

Whatever way you can give, give generously.

Did you know ➡️ A donation of $50 will provide 23 nourishing meals and care? During these winter months, we are ALSO in need of:
》winter coats
》hats
》gloves
》women's sweatpants
》pajamas

“I asked his aunt to adopt him so he has a permanent, good home,” Vanda said.

A tent outside an east side Walmart has been Vanda and Terry’s home lately. It's where Diana Walker found them last Thursday night.

“It was 11 degrees and I asked her husband ‘Is there anything you need?’ and he said, ‘blankets,’” Walker said.

Helping isn’t new to Walker. She runs Dwelling Place Ministries on the east side and often feeds people who are hungry. Some of them are homeless too. It’s an issue that hits close to home.

“My brother, he had a mental breakdown and lost his mind and he’s homeless and on the streets of L.A. He’s been missing eight years,” Walker said.

After getting food and blankets for the Turpins, Walker put out a call on Facebook about their situation.

“There was an immediate response, people wanting to help,” said Walker.

That help enabled Walker to get Vanda and Terry into a motel until Monday, giving Walker time to call shelters. She was hoping to find a place that would take the couple together.

Vanda doesn’t want to be separated from Terry, especially now.

“I want to stay with my husband because of my mental illness. He helps me out a lot,” she said. “There’s nothing out there for us."

It shouldn’t come as a surprise that the couple can’t find a safe place to lay their heads at night. Groups who work with the city’s homeless say it’s become worse with COVID-19 because shelters haven’t been able to take in as many people. Finding a shelter that takes a married couple is even harder.

“A lot of times you say ‘We’re going to bite the bullet. We’re going to stay together, right?’ And you end up staying in the park or in the car or out on the street,” said William Bumphus, executive director of the men’s emergency shelter for Wheeler Mission.

Bumphus says even with some local hotels opening rooms to pick up the slack, it hasn’t been enough.

“As soon as you open those spots up, people come," Bumphus said. "It’s like, we didn’t think it was going to be like this and it turns out being like that because you just don’t know. There’s a lot of people out there who are homeless that we just don’t know about."

Vanda and Terry are among them. Vanda is determined it won’t be her babies’ fate. The couple has decided to find the children adoptive families.

“They’ll have a home. They won’t be out here in this miserable world where people are so cruel,” said Vanda.

She’s thankful, though, that Diana Walker turned out to be different.

Click here to learn how you can help Indy's Wheeler Mission.