Some people in the small Madison County town say the phrase "All Lives Matter" on two of the town's police cars sends the opposite message. 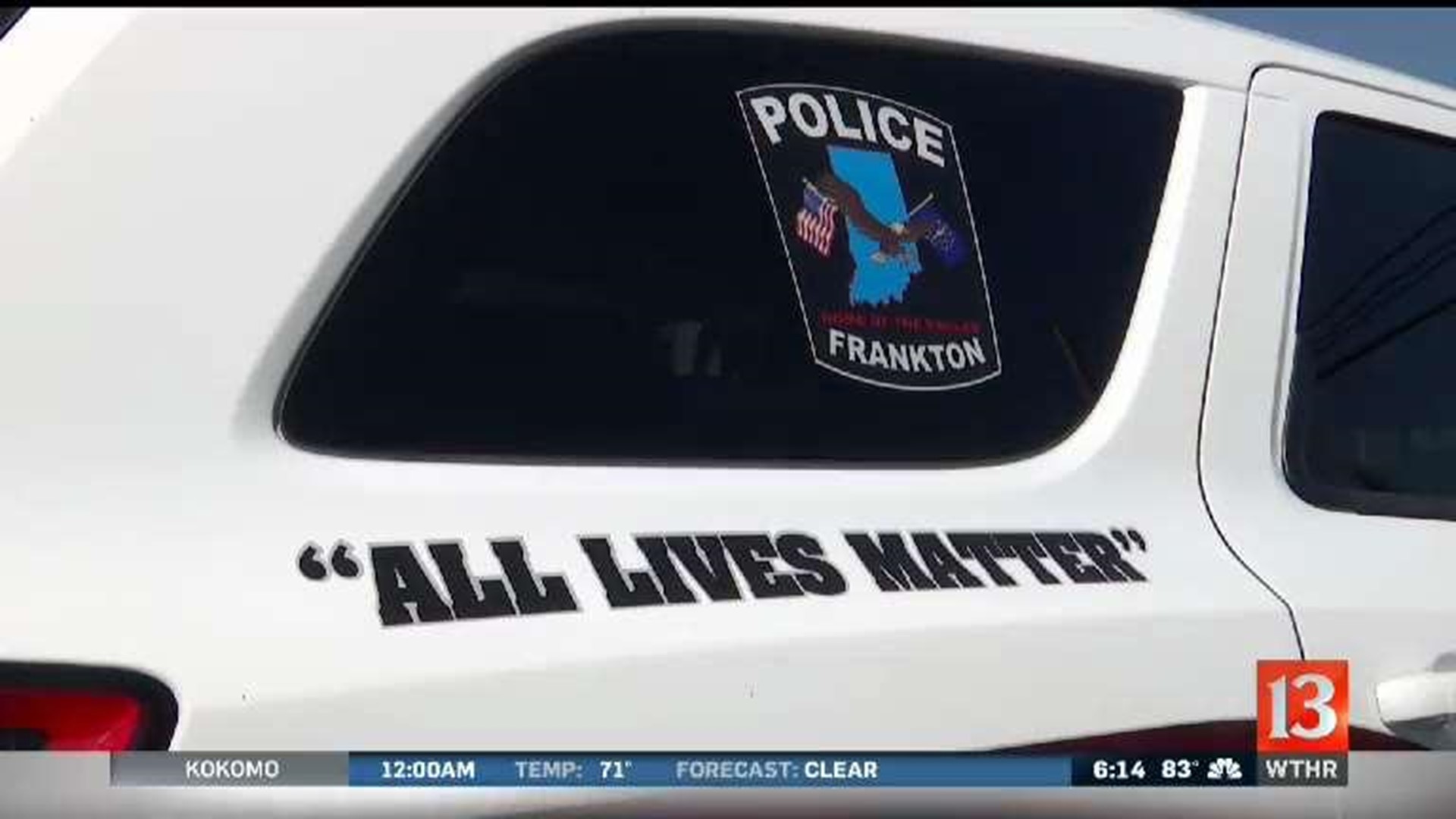 FRANKTON, Ind. (WTHR) — Frankton celebrates Heritage Days this weekend. But some feel that heritage is harmed by the message "All Lives Matter" on the town's police vehicles.

The slogan on the rear quarter panel of a Frankton Police Department SUV reads “All Lives Matter." Some people in the small Madison County town say the phrase sends the opposite message. An online petition calls for the words to be removed because they demean the “Black Lives Matter” movement.

The goal of this petition is to get the Frankton, Indiana police to remove “All Lives Matter” from their patrol vehicles. ​

This controversial slogan does not belong on the vehicles of those meant to protect and serve. I believe this slogan on the vehicles can give the wrong impression of the town.

About 150 people had joined the online petition by Thursday evening.

Bill Taylor has lived in Frankton over 40 years. He wants “All Lives Matter” to stay on the police vehicles. Taylor plans to make a sign to put in his yard with the slogan on it.

"This stands for every color, every person that's walking this earth,” said Taylor, pointing to the slogan on the police SUV. “Why would somebody want this gone when it stands for unity?"

Madison County NAACP President James Burgess did not take a position on the petition when asked about the controversy Thursday at the chapter headquarters in Anderson. But Burgess says the phrase “All Lives Matters” makes him ponder intentions.

"I could never say something's wrong with that,” said Burgess, who has served as chapter president for 30 years. “I could say, 'Hmm, what's the intent of that?' because ‘Black Lives Matter’ is the issue that is being left out."

Town Marshal Dave Huffman says the slogan decals were put on Frankton Police vehicles three years ago. But in response to the petition, he plans to remove them.

It has come to my attention that residents and non-residents of the town of Frankton have recently circulated a petition against the “All Lives Matter” decals that have been on our police vehicles since 2016. This petition is the first indication that I or any other town of Frankton officials have received that some people may have perceived the decals as critical of the nationwide “Black Lives Matter” movement. This was certainly not the intent of the town of Frankton or me as the town marshal. Rather, the decals were designed to promote the Frankton Police Department’s commitment to serving all of its citizens.

As the town marshal, I am authorized to make certain decisions regarding the operations of the town’s police department, within legal and budgetary limits, including the design of the town’s police cars. When designing the exterior of a new police vehicle in 2015, I sought input from other police department and town officials to set forth a slogan that would illustrate the seriousness with which Frankton police officers take their duty to protect all of the town’s citizens regardless of income, economic status, race, nationality, age or any other factor. The Frankton Police Department believes this duty is of the utmost importance and strives to fulfill it every day. The “All Lives Matter” decals were intended to represent this commitment.

I regret on behalf of the town that the decals have antagonized some citizens and have appeared critical of the “Black Lives Matter” movement. As unity among our citizens is important for a healthy community, the Frankton Police Department plans to remove the “All Lives Matter” decals from its police cars. Further, town residents are always encouraged to voice their concerns at meetings of the Town Council, which are scheduled the second Monday of every month at the Frankton Police Department, 108 E. Sigler Street, Frankton, Indiana.

The Frankton Police Department only has three vehicles. Only two are marked with decals. Huffman said he will remove the decals as soon as possible.