The Dolan family of Fishers is thankful for Riley Hospital for Children. 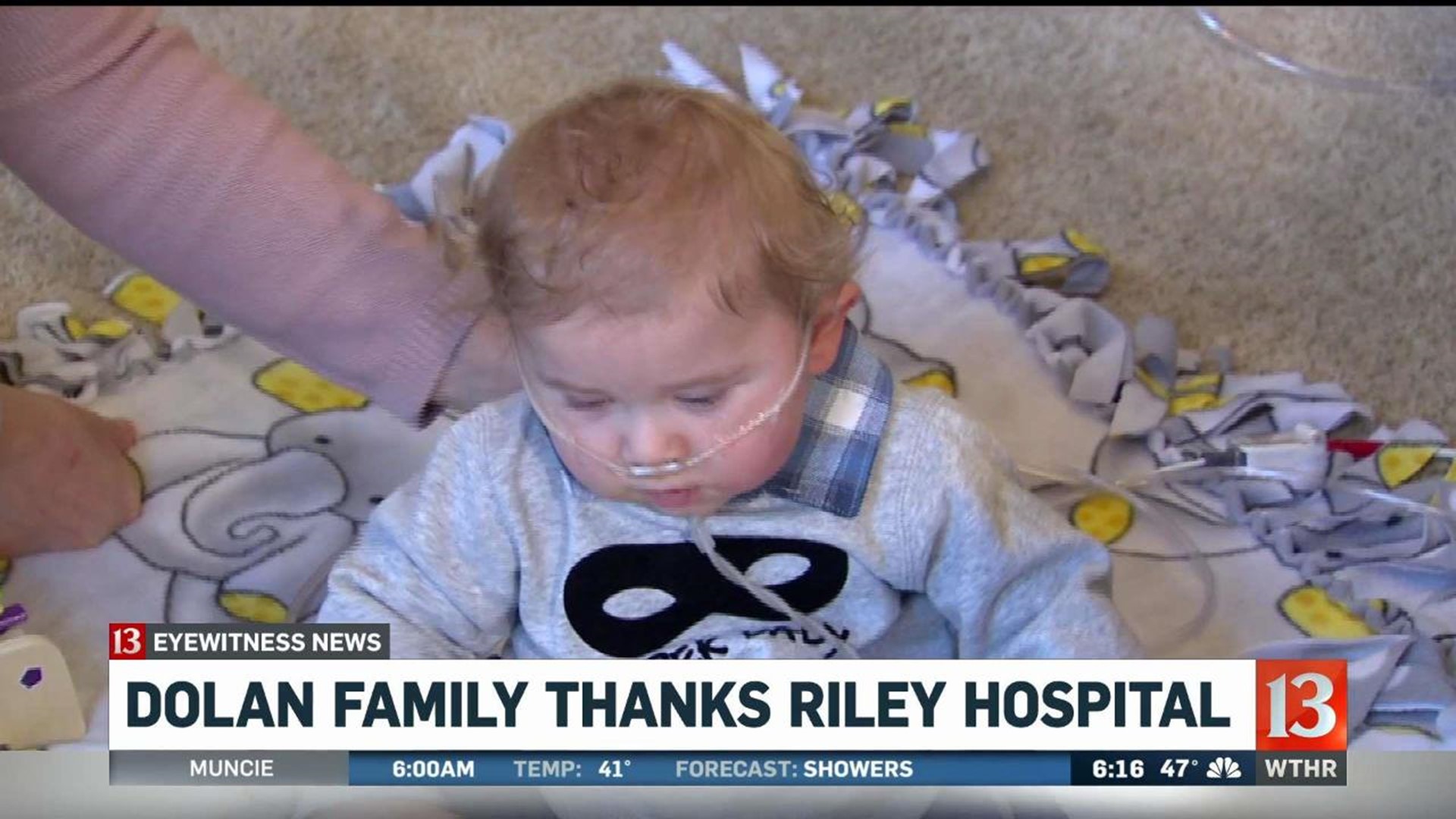 INDIANAPOLIS (WTHR) — It's the season of giving and a time to be thankful.

The Dolan family of Fishers is thankful for Riley Hospital for Children. Their 11-month-old little boy is receiving critical care from the staff at Riley Hospital. Now, they're paying it forward by sharing their story of hope. Jameson Dolan will soon be back at Riley Hospital for Children for a major surgery and 5-week stay. It's a place he's familiar with. Jameson turns 1, four days after Christmas. Doctors discovered his condition during a routine ultrasound, when his mom Sheila Dolan was just 19 weeks pregnant.

"His abdominal organs were growing outside of his body," Sheila said.

Dr. Brandon Brown, a Fetal and Pediatric Radiologist with Riley Hospital said "there had been an interruption in the normal process of closure." It's a condition called omphalocele, where a baby's liver, intestines and other organs stick outside of the belly, just protected by a sac. Jameson was also diagnosed with a spinal defect, a form of spina bifida, where the spinal cord doesn't develop properly.

"There was immediate grief, not that we had lost a child at that point, but that our child's life was not going to be what we expected for him," Sheila said.

Doctors didn't know if Jameson would make it.

"We went week-to-week in the pregnancy just grateful for another week," Dolan said. Those weeks got more interesting though, as doctors made another startling discovery with Sheila's uterus and placenta. Doctors told Dolan the placenta was invading the wall of the uterus, time was ticking. Now, Jameson's mother's life may be at risk because the potential for massive bleeding was big. Doctors at Riley wanted to give Jameson as much time to develop in the womb, but they couldn't wait any longer.

So at 34 weeks, Sheila's C-section came with fears that either she, or her son, may not make it.

"We prayed there in the pre-op room, and the surgeon was involved," Sheila's husband, James, said. "It was in her hands. It was in God's hands at that point."

Doctors delivered. The Dolan's prayers were answered. Jameson was alive, but was immediately taken to Riley's neo-natal intensive care unit. Sheila had to recover from surgery, so James went to Riley's NICU with Jameson.

"I left without knowing if she was OK. That's tough," he said.

Sheila had to be put under deep sleep for her surgery.

"As soon as they pulled the breathing tube out of my throat, the first thing I said was: how's my baby? Is my baby OK," Sheila asked.

Days later, Sheila held her little boy for the first time. Their journey with Riley wasn't over, though. Jameson had to have surgery on his stomach to help repair his omphalocele.

Jameson's immune system is low. He's been in the hospital twice with pneumonia and Riley Hospital is always there.

"We've lived in Indiana 30-plus years. We know about Riley, we know about the amazing stories, but go back 18 months, we weren't touched by Riley yet," James said. "If we had an opportunity to get involved: volunteer, donate more, do something years ago to help families in the position we are now, absolutely we would have."

Jameson has another surgery in several weeks, which doctors hope will be his last for awhile.

Now is your chance to help. Riley Hospital's "Be the Hope Now" campaign depends on your generosity to help kids like Jameson, and families from across the country who come to Riley seeking help. The goal is to raise $175 million by June 2020 for three high-priority programs: Pediatric Research and Patient Care, Maternity & Newborn Health and Family Support Programs. If you'd like to learn more, or give a gift, go here.