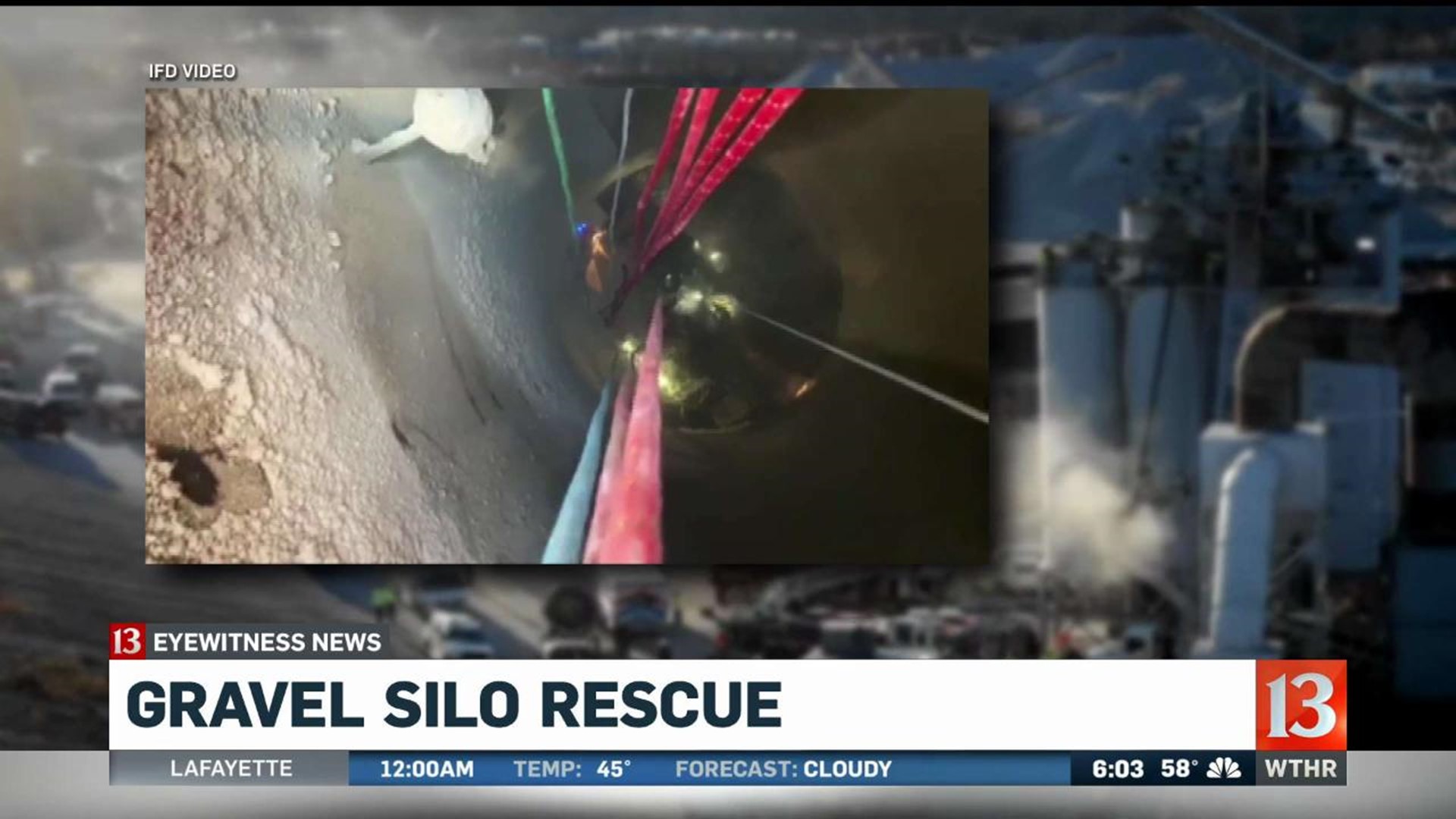 INDIANAPOLIS (WTHR) - The contract worker who got stuck in a silo full of gravel Tuesday on the north side of Indianapolis is now out of the hospital and back home in Kentucky.

Miraculously, he has no broken bones and no internal injuries.

Firefighters who helped the man survive talked about what it took to do that.

They train for a lot of scenarios, but even crews who have worked rescues for decades say they've never experienced anything like Tuesday's seven-and-a-half hours.

"He was trapped up to his chest with gravel material all around him," explained IFD Special Operations Battalion Chief Kevin Jones.

He was stuck 30 feet down in a silo filled with asphalt.

Walls was doing maintenance in the silo Tuesday morning. He told fire crews that, while taking measurements, he misjudged the slack in his harness and got sucked into the pile of rocks during a controlled release of the asphalt.

Getting him back to safety was quite a group effort.

Seven rescuers over seven-and-a-half hours were inside the silo itself, not to mention all the emergency responders above ground.

Indianapolis, Fishers and Greenfield fire crews got a firsthand perspective of the danger, squeezing into a tiny space to be dropped inside the silo.

"20 inch by 20 inch hole going down and it was about 30 feet deep," explained Greenfield firefighter David Wickard, who's on Hancock County's Tactical Rescue Team.

IFD Collapse Rescue Team Coordinator Bill Zimmerman was one of several firefighters who went inside to help.

"We were talking with him throughout. I mean he was in good spirits throughout the operation. I was in there with him for quite a while," Zimmerman said. "It was dark. It was dusty. The coarse gravel was the challenge."

Much more challenging than grain bin rescues, which crews train for a lot. The gravel was loose and kept filling back in around the worker. It's like digging out concrete.

Greenfield firefighters got the call to help Indy crews about an hour into the rescue. Hancock County had tubes, normally used for grain bin rescues, that would keep gravel from crushing the man. It was still complicated.

Crews went through plans A, B, C and D to help the man survive.

"We have team members that train their entire career and don't experience this type of run," Zimmerman said. "But we're used to having that level of mentality that we have to be thinking two steps ahead."

Rescuers, including Wickard, never left the victim's side.

"Everything's going to be ok. Are you ok? Just kind of kept him talking a little bit just so he can be calm. He was completely calm the whole entire time until towards the end. He wanted to get out. He was ready," Wickard said.

A vacuum truck from the city of Carmel was key in sucking the gravel away from the worker.

"We vacuumed a lot of that out. And it was dusty and it was loud, I mean really loud," Wickard said.

Eventually, they let rocks out from the bottom a little at a time and with ropes and harnesses, lifted Walls out. He has no broken bones and no internal injuries, all thanks to all the talented rescue crews.

"He was somewhat apologetic, that he was sorry he was down there but he was also extremely grateful and thankful we got him out," Jones said.

"Oh yeah, he was giving us high fives. He was ready to get out. He was so happy," Wickard added.

Walls is now back home in Kentucky. He told his boss he's ready to get back to work -- just in the shop, not a silo.