Indianapolis Metropolitan Police say the officer who restrained a man during an epileptic seizure inside a gas station did not violate any department policy or procedures. 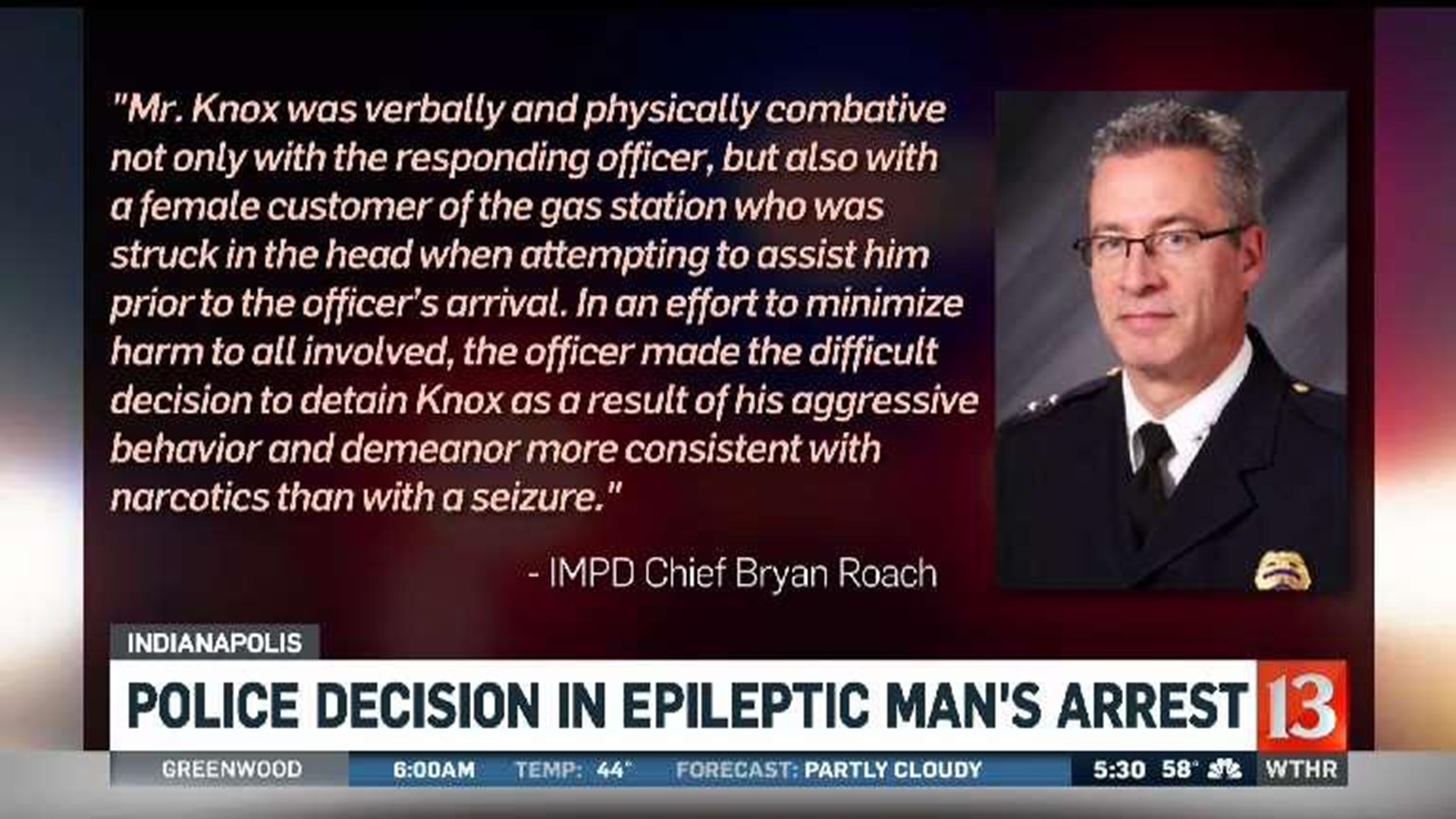 INDIANAPOLIS (WTHR) — Indianapolis Metropolitan Police say the officer who restrained a man during an epileptic seizure inside a gas station did not violate any department policy or procedures.

The Knox family just wanted an apology and better training for officers. But now they plan to sue the city.

Store security video from March 30, 2018, shows how Knox collapsed at the counter inside the Speedway at 10th Street and Lynhurst Drive.

IMPD Officer Maurice Norris responded first. He observed Knox sitting on the floor for about 30 seconds after arriving before acting to physically restrain him.

"All of a sudden he reaches down there and puts him in a choke hold and puts his knee in his back and goes from there," said Darrell Knox, Chris' father, describing what he saw in the video. "It just escalated."

Darrell says Chris has suffered epileptic seizures about once a month for 15 years.

"He has violent seizures," said Darrell, who has power of attorney over his 32-year-old son. "When I say violent, he flails his arms and his body. Me and my son, both of us, we can't even hold him down. He's just extra strong, if you will."

IMPD Chief Bryan Roach responded in a statement to WTHR:

"The IMPD is committed to addressing the needs of residents in crisis and helping them return to a healthy equilibrium. That's why we've rolled out crisis intervention, mental health first aid, and de-escalation training to all our officers and have launched innovative units like our Mobile Crisis Assistance Teams and Behavioral Health Units to divert residents in crisis from jail and instead connect them with critical services, resources, and care. The unfortunate reality of our work is reasonable use of force is sometimes necessary to ensure the safety of the public.

In the incident in question, Mr. Knox was verbally and physically combative not only with the responding officer, but also with a female customer of the gas station who was struck in the head when attempting to assist him prior to the officer's arrival. In an effort to minimize harm to all involved, the officer made the difficult decision to detain Knox as a result of his aggressive behavior and demeanor more consistent with narcotics than with a seizure.

The Internal Affairs investigation into this incident found the responding officer used a reasonable amount of force and did not violate IMPD policy or procedure. We appreciate and continue to discuss this incident and others to better perform our jobs and reach our high expectations."

Officer Norris wrestled with Chris for two minutes before the two men separated. When Officer Tiffany Christy arrived as backup, Officer Norris tackled Chris, throwing him to the ground.

"She started helping the other officer," said Darrell. "I would say beat him instead of control him. They were kicking him, cussing, everything. Then they tased him also."

A customer's cell phone video includes audio of the incident.

Officer Christy can be heard shouting for Chris to stop resisting while both officers are on top of him. Chris is heard crying out in pain.

"When the police do beat up an epileptic who's having a seizure, when they strike that person in the head multiple times, take him to jail, no charges are filed, they have to accept responsibility for that conduct," said Carl Brizzi, attorney for the Knox family. "No one's saying anything criminal happened or anything like that. But you have to take responsibility when you make mistakes."

Epilepsy Foundation Indiana says 69,000 Hoosiers have epilepsy and one in 26 people will suffer a seizure in their lifetime.

"You never want to restrain someone having a seizure because it can cause damage, it can be dangerous," said Ryan Keys, Epilepsy Foundation Indiana Executive Director. "If they’re down, you try to put them on their side. Make sure you can put something soft under their head if they're still convulsing and you just stay with them until they are coherent again. But if you put your hand on them, they may actually attack because it's a fight or flight response."

"If this happens again, which I'm sure it's going to, they need to be trained better," Darrell said. "At least have one medical officer go in there instead of just an officer that decides they're going to kick the crap out of my son."

Darrell says Chris has no recollection of what happened to him at the gas station a year ago. Chris was arrested during the incident, but all charges were dropped.

Chief Roach agreed with internal affairs. He denied the board's finding, which is within his authority. He told board president Duane Ingram that he considered additional evidence that the Officer Norris had responded to other recent drug overdoses in the neighborhood.

With representation by Brizzi, the Knox family is pursuing a federal civil rights violation lawsuit against the city.