The Dolan family is encouraging others to help the Riley Children's Foundation and their Christmas giving campaign during Wednesday's virtual Riley Rally. 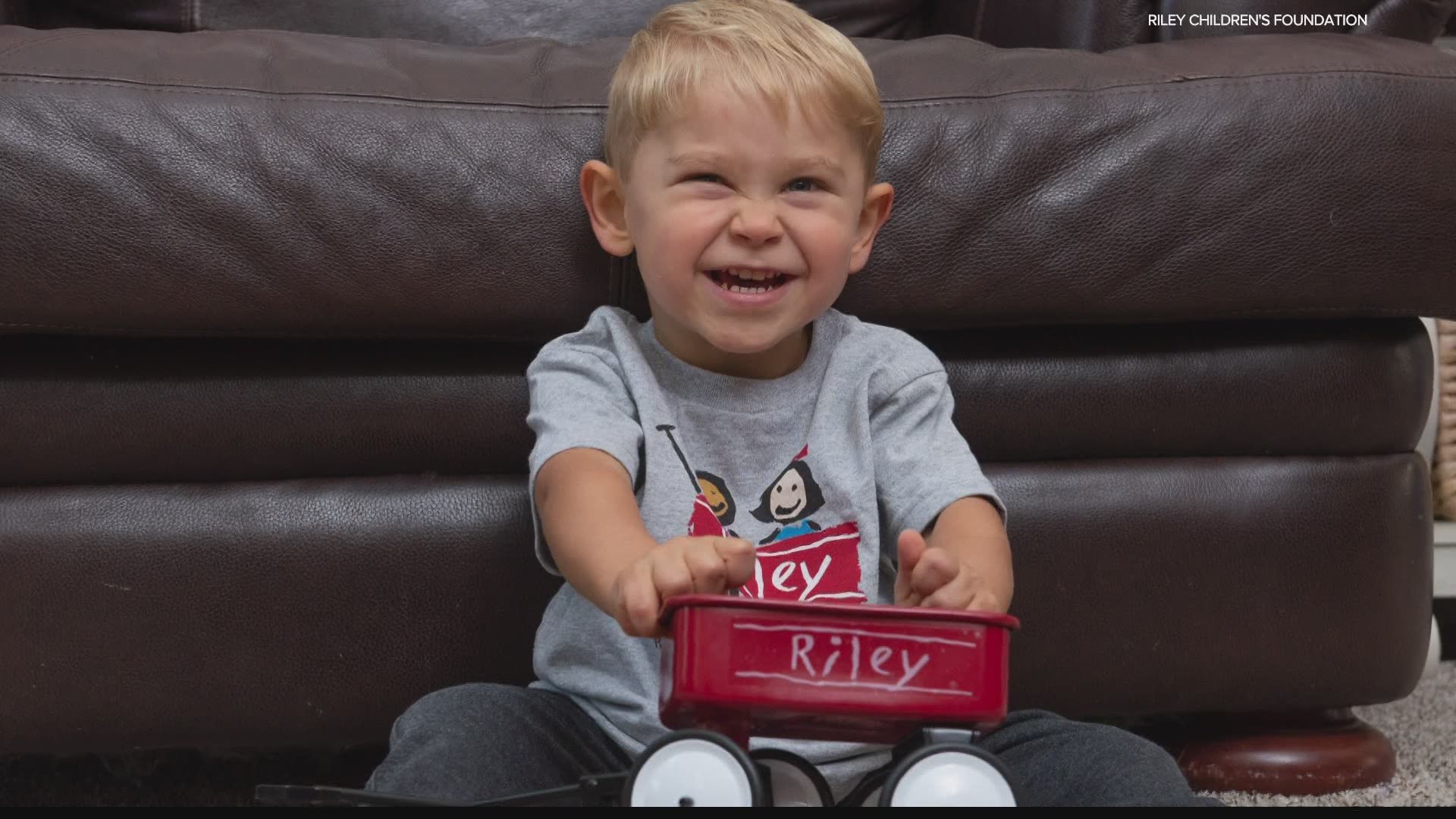 INDIANAPOLIS — Jameson Dolan couldn't contain his excitement as he sat between his mom and dad during a Zoom call.

"It's my birthday," he shouted and then giggled.

"Seeing a happy kid like this, you have no idea what he's been through in his almost three years of life," said dad James Dolan.

Doctors at Riley Hospital for Children at IU Health discovered his condition during a routine ultrasound, when his mom was just 19 weeks pregnant.

It's a condition called omphalocele, where a baby's liver, intestines and other organs stick outside of the belly, protected by just a sac. Jameson was also diagnosed with a spinal defect, a form of spina bifida, where the spinal cord doesn't develop properly.

"He spent almost a quarter of his life in the hospital," said James.

Jameson has had seven surgeries and 10 hospital stays.

"This is the first time we had to deal with anything like this. So when we got the news back in 2017 what potentially was going to happen, we were lost," said James.

The Dolans are thankful for the doctors at Riley Hospital.

"The ones that walked into his room and did his first surgery are the same ones that we're seeing today for follow-up appointments," said Sheila. "They've proven to us time and time again that they've got and they'll always take great care of our little guy."

A little guy full of life, laughter and appreciation.

The Dolans say Jameson still has some challenges, like with eating.

"He has a G-tube, so we try to encourage him to eat actual food and he gets fed through his G-Tube. There are different medications, supplements he has to take," said Sheila.

Jameson is also a 2-year old who loves to sing.

The Dolans want to let other families know that there is hope through difficult times.

"There is comfort in knowing that Riley will handle you great. The doctors and nurses know what they're doing," said James.

It's a reason why the family is encouraging others to help the Riley Children's Foundation and their Christmas giving campaign.

Make a list, check it twice, and ship those toys to Riley this year
To keep everyone safe, generous elves and supporters of Riley are asked to order toys off the Cheer Guild’s Top 5 Amazon wish list and get them shipped for free.https://t.co/bIVrF4po9P pic.twitter.com/tOeSgQYVcB

Jameson was honored at Wednesday's Riley Rally virtual event as a Riley Junior Champion alongside Lyla DeArmond and Caiden Rogers of Indianapolis, River Harbin of Otwell in Pike County and Selena Lipscomb of Muncie.

DeArmond, now 1, was just a few days old when surgeons removed life-threatening cysts from her lungs. Harbin had heart surgery when he was just a week old. Now 5, he had a heart transplant last year.

Lipscomb, 1, spent six months at Riley Hospital for Children at IU Health after she was born with rare life-threatening pulmonary and breathing problems. Rogers, now 3, was born prematurely at 24 weeks and was cared for in Riley's Pediatric Intensive Care Unit, spending six months at the hospital.