EXCLUSIVE: Roncalli counselor speaks out after she claims school threatened to fire her over same-sex marriage

A guidance counselor made her previously private relationship public after Roncalli leaders threatened to fire her for marrying a woman. 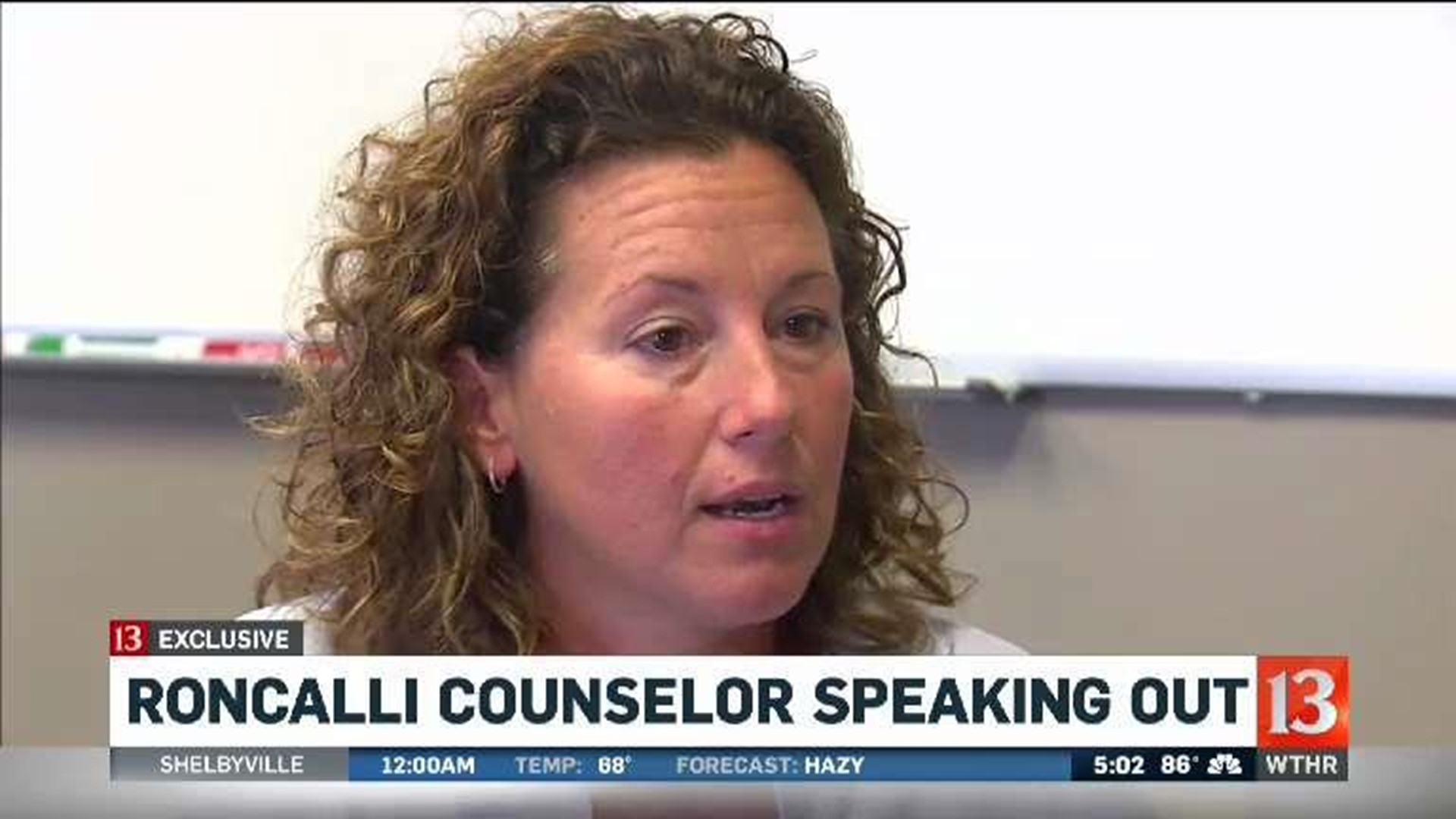 INDIANAPOLIS (WTHR) — A high school counselor is fighting for her job in another battle over same sex marriage.

Shelly Fitzgerald has been at Roncalli High School for more than a decade.

She's been with her wife for years. But that could be the reason she gets fired.

Fitzgerald spoke exclusively to Eyewitness News Monday about what happened when school leaders were given her marriage certificate and how she hopes staying vocal about her sexual orientation now leads to positive change.

Family and faith have always meant home at Roncalli High School for Fitzgerald. She's a strong Catholic, a Roncalli graduate, a high school counselor there for 15 years.

"My identity obviously is to be a wife and mother, but Roncalli is what filled my cup," Fitzgerald told Eyewitness News. "It is family. I grew up here."

She says that's why what's happening now is so painful.

She was told by school leaders and the Archdiocese that her job is in jeopardy because she's married to another woman.

Each time Fitzgerald signed her contract at Roncalli, she says she knew that meant keeping her personal life a secret. To strangers, on social media, and to her bosses, she stayed silent about her wife, so that she could help students at the same Catholic high school she attended.

"I have had nieces and nephews and cousins that have gone to Roncalli that before their freshman year I've had to say to them, 'You can't say anything to anybody'," Fitzgerald explained.

But who she loves has now put the job she loves at risk.

Fitzgerald says school leaders asked to meet with her last Friday afternoon, after discovering her marriage license. She says she was told a parishioner at a local church got the certificate and gave it to their priest. That priest then shared it with school leaders at Roncalli.

"I think their hand was forced and I'm sorry that they're in this position. They said that either I could resign, that I could dissolve my marriage," Fitzgerald said.

Or, she says, they told her she could keep things quiet, stay through this year and not get renewed next year. If things got noisy, they would fire her.

"I told them, you know, I've been quiet for 15 years so why is this different? I mean I've hidden everything from social media. I've hidden from people I love because I knew I was at risk for losing my job over this," Fitzgerald said. "I have no intention of resigning. I have no intention of being quiet. And I didn't need the counsel that they were offering from priests. My goal, my intent is just to be a catalyst for change. That's it."

Fitzgerald married her wife in 2014. They've been together for 22 years and have a 12-year-old daughter, who they adopted as an infant.

She believes speaking out now is setting an example for her students and her own child.

"There's a piece of me that is shameful for the message that I've taught my daughter in the last 15 years that this is OK to stay quiet to keep a job. But I will tell you the lesson she has seen in this now is one of incredible love," Fitzgerald said.

The Archdiocese didn't respond to our request for comment on the situation. But Roncalli did post a message about it on Facebook. In it, the school says it stipulates employees' personal conduct convey the teachings of the Catholic Church, including marriage between a man and a woman.

The Archdiocese of Indianapolis and Roncalli High School are aware that Ms. Shelly Fitzgerald, who is employed as a...

"... Catholic schools are ministries of the Catholic Church, and teachers, school guidance counselors and administrators are vital ministers in sharing the mission of the Church. They are expected to be role models and are expressly charged with leading students toward Christian maturity and with teaching the Word of God. As role models for students, the personal conduct of every teacher, guidance counselor and administrator and staff member, both at school and away from school, must convey and be supportive of the teachings of the Catholic Church. These teachings include, but are not limited to: honoring the dignity of each human life from conception to natural death, care for God’s creation, and the belief that all persons are called to respect human sexuality and its expression in the Sacrament of Marriage between a man and a woman as a sign of God’s love and fidelity to His Church. A thorough description of Catholic teaching can be found in the Catechism of the Catholic Church.

These expectations are clearly defined in school employee contracts and ministerial job descriptions so every employee can make an informed decision regarding their employment prior to the start of each program year and before signing the annual contract. When the expectations of a contract are not being met, the employee and the school will attempt to reach a resolution so that the contractual requirements are fulfilled."

Fitzgerald has hired an attorney, David Page, who attended Roncalli himself and so do his three children. He says he took the case because he believes in the school and believes in Fitzgerald.

"She's wonderful at her job and nothing should stop her from being able to do it. Nothing," Page said.

While Page wouldn't talk specifics, he says that the law states there are many ways to interpret a contract and that similar contracts have been successfully challenged.

In Fort Wayne, for example, a teacher at a Catholic school reached a settlement after suing the diocese in 2011. She had been fired after they found out she underwent in vitro fertilization, which they claimed was a violation of the contract.

Page noted the 7th Circuit Court of Appeals, in Hively vs. Ivy Tech in 2017, extended protections based on sexual orientation. He also noted the University of Notre Dame, a Catholic college, now gives benefits to same-sex couples employed at the university.

Page says all options for Fitzgerald are on the table right now and they're not ruling out a discrimination lawsuit. But they both hope a dialogue with the diocese and the school will avoid a challenge in court.

Will she get her job back?

"We'd like to sit at the table and say obviously we think there's a problem. How do we make it better? Where do we go from here," Page said. "It's clear some change needs to be made."

"I don't have any expectations except to be a catalyst for change and love," Fitzgerald said.

Fitzgerald has a lot of support from families with the same deep faith she shares. She says she's received thousands of messages online and through social media.

"At Roncalli, we teach them to stand up for people. We give them a voice. We teach them to be people who are advocates for other people," Fitzgerald said. "I have never been so proud of our students and faculty and staff and parents and people I don't even know who've reached out to me because it's important, and we taught them to use their voice and they are."

Outside the high school Monday, t-shirts of support lined the lawn.

Fitzgerald says all of that compassion is exactly the faith and family she loves - the Roncalli she knows.

"It's completely overwhelming. Humbling," Fitzgerald said. "I have never been so proud of our students and faculty and staff and parents and people I don't even know who've reached out to me because it's important. This is exactly what we've taught them to do. Use your voice for good and stay positive. Be kind to one another. And trust that God will put the right words in our mouth and at the end of the day, pray for both sides because I know this isn't easy for the people at Roncalli or at the Archdiocese as well. Roncalli is a great, loving place. I only want to make Roncalli a better place, truly."

This controversy is generating conversations statewide and nationwide. She said she's received requests for interviews all across the country.

Some lawmakers are weighing in, too.

.@SCOTUS decided same sex marriage is legal. While religious
liberty in America allows people to hold their own personal beliefs, no one
should lose their job for exercising their rights as an American—voting, worshipping, or marrying who they love. https://t.co/raP5AM6cTB

Congressman André Carson tweeted Monday, ".@SCOTUS decided same sex marriage is legal. While religious liberty in America allows people to hold their own personal beliefs, no one should lose their job for exercising their rights as an American—voting, worshipping, or marrying who they love."