Matt Landis grew up in Northern Indiana a loyal Michael Jordan fan and with a large collection of Jordans to prove it. 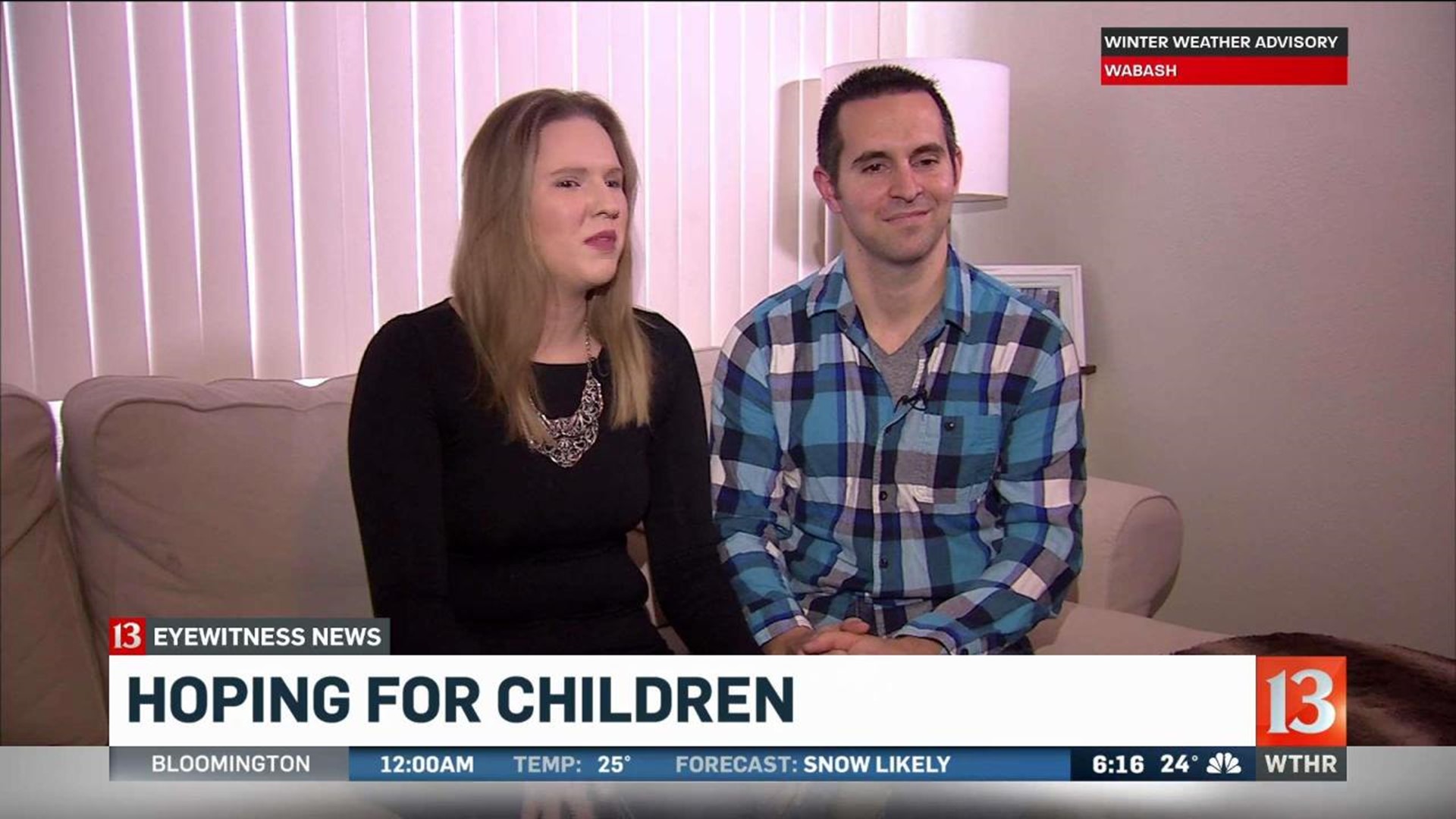 ELKHART (WTHR) - Matt Landis grew up in northern Indiana a loyal Michael Jordan fan and with a large collection of Jordans to prove it.

So, when Landis offered to sell his treasured shoes to finance the cost of starting a family, many were surprised. Perhaps because at the time, few were aware of the misplaced guilt Landis carried based on a medical diagnosis he was powerless to change.

"You can't do what you're supposed to do. So that's where the embarrassment comes from a little bit," Landis said.

His bride, Taylor, was crushed.

"It kind of catches you off guard, especially if you go your whole life, like, dreaming of being a mom. It feels like it was almost taken away like that in an instant," Taylor said. "Matt is my husband. He's my best friend, so I was hurting for him too, not only myself, but I knew how badly he wanted to be a dad. It was rough, but we got through it."

Taylor secured an appointment with doctors at the Indiana Fertility Institute. It's where Dr. Meredith Provost assured Matt he's far from being alone.

Research shows male sperm counts are dropping dramatically in the United States, Western Europe, Australia and New Zealand. In these nations, the counts are down nearly 60 percent over 40 years with no signs of leveling off.

"That is huge! I mean, that is a massive decline in sperm count and it's concerning, because we don't really know why," Dr. Provost said.

She says, as researchers try to identify environmental and lifestyle causes, she's charged with finding a fix for couples like the Landis.

Provost says often medication and lifestyle changes can help boost the counts and allow a couple to conceive naturally. But since Landis' levels were so low, she determined the best bet for to conceive was through IVF, or in vitro fertilization.

Provost harvested Taylor's eggs and fertilized them in the lab with Matt's sperm. Taylor documented the entire journey online.

"I was skeptical at first, just because I didn't want people knowing, but, it turned out to be a blessing in disguise," Landis said.

That's because, the Landis story created hope and a dialogue with other couples hoping to start a family.

Provost says one in eight couples have infertility issues and too often the medical work-ups and tests focus on the female. Provost says it's often months into the process until the man is tested. That delay in testing men can be a waste of time, money and emotion. Provost believes men are unaware of their role or want to avoid the screening which requires them to provide a sperm sample for testing.

"I am so glad to hear that Matt is talking (about) it, because I think we just need those first few brave people to be outspoken about it. It's just sperm, it's not their manhood, it's not the same thing. You can be very manly and have a low sperm count, you can have a great sperm count and not be manly at all. So, they are not related," Provost said.

Taylor was implanted with one fertilized egg and got pregnant with a boy.

Baby Trey will turn one this July.

"He's perfect for our family. I think he just really completed us in ways that we really wouldn't have been completed in any other way besides having a child," said Taylor Landis.

Matt sold his shoe collection to help cover the medical bills. But now that he's a dad, he's already started a new one. The first pair he purchased is a pair of Baby Jordans for Trey.