Seventy animals seized from "deplorable conditions" in an Owen County home are now under the care of the county's humane society. 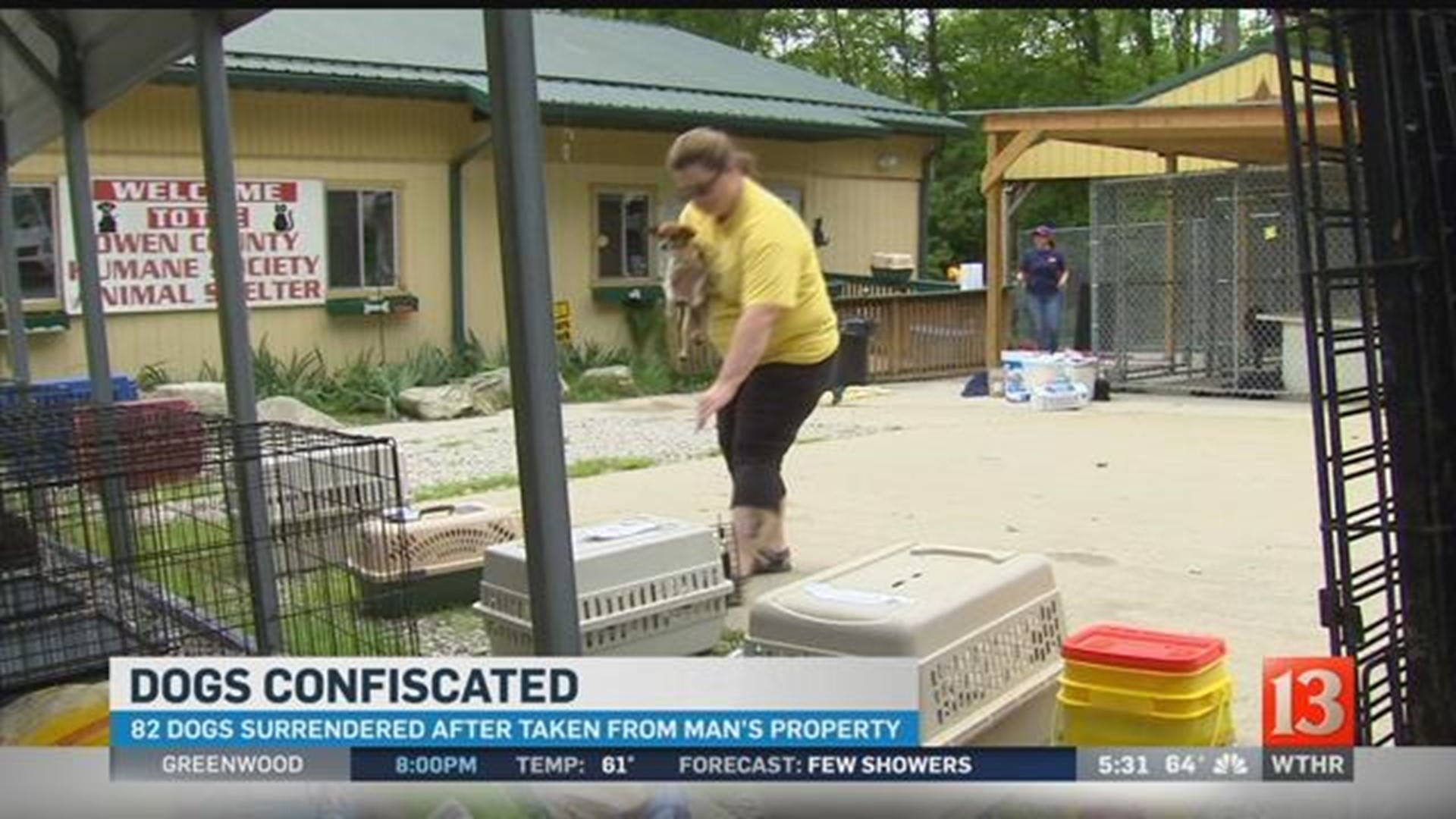 An Owen County man has agreed to surrender his dogs, all 82 of them, to the Owen County Humane Society.

Authorities confiscated the dogs this week after Paul Purcell's property was declared a public health emergency: overrun with rats, vermin and animal waste.

Becky Brown Cunningham, Vice President of the Humane Society, said she was very relieved with the agreement.

"You just look at these little faces and they're so scared," she said. "We just want everyone to know how grateful we are to everyone for helping us."

The Humane Society, which has space for 50 dogs, freed up space after other shelters offered to take any dogs already up for adoption.

Many people also called volunteering to help clean cages and bathe dogs, while others dropped off food, supplies and donated money.

Wiping away tears, Shepherd said. "I feel sorry for them. It's sad, very sad."

Wilson added, "It's ridiculous. If you can't take care of an animal, don't keep it."

Shelter Director Jessi Frankie said the dogs weren't abused, but they were neglected.

She said they were "really dirty, covered with fleas and ticks, had long toe nails and goopy eyes and some were very thin."

One older dog had a tumor covering the bottom of his front paw.

"It's very raw underneath," Frankie said. "He doesn't stand much and I don't blame him."

The dogs sat in crates waiting to be bathed. There are Huskies, hound dogs, beagles, poodles and other mixed-breed dogs. Some are puppies. Many are scared but friendly.

Kim Buis, who sits on the shelter board, sat on the lawn next to a hound, gently stroking her head.

"Hi pretty girl. It's okay, it's okay," she reassured the dog as it buried its head in the grass.

"My reaction (at seeing these dogs) was wow, heart-wrenching. It's just awful to see this," Buis said.

Frankie agreed, "You want to cry but it does no good for the animals. You just think what's the next step in getting these animals taken care of?  You know they're safe now, getting fed and watered. The next step is to get them vaccinated. You gotta think of the next step and keep moving forward."

Now that the dogs have been surrendered, the next step is getting them healthy and ready to be adopted or placed in foster care.

Sara Peterson with the Monroe County Humane Society was among those bathing and feeding the dogs Friday afternoon.

"Thank God someone's doing something about it," she said.  "That's what folks like us do."

Cunnigham doubted any animals would have to be euthanized. She thought it would be a few weeks before any would be put up for adoption.

The Humane Society wrote on Facebook they took in 70 animals in 36 hours, noting the pets "were living in some of the most deplorable conditions this group has ever seen."

"The amount of trash, rats, and squalor is hard to imagine, even as you are seeing it, tasting it, and smelling it your brain can not fully comprehend," the organization posted Thursday evening.

The organization is also requesting donations of bleach, paper towels, laundry detergent and Dawn dish soap to help care for the sudden influx of animals. Monetary donations can be sent to the Owen County Humane Society, 2014 Romona Road, Spencer, Indiana 47460 or through PayPal at the email address owendogscats@gmail.com.