Semis are supposed to detour around Interstate 465, but a growing number are still ending up on downtown streets. 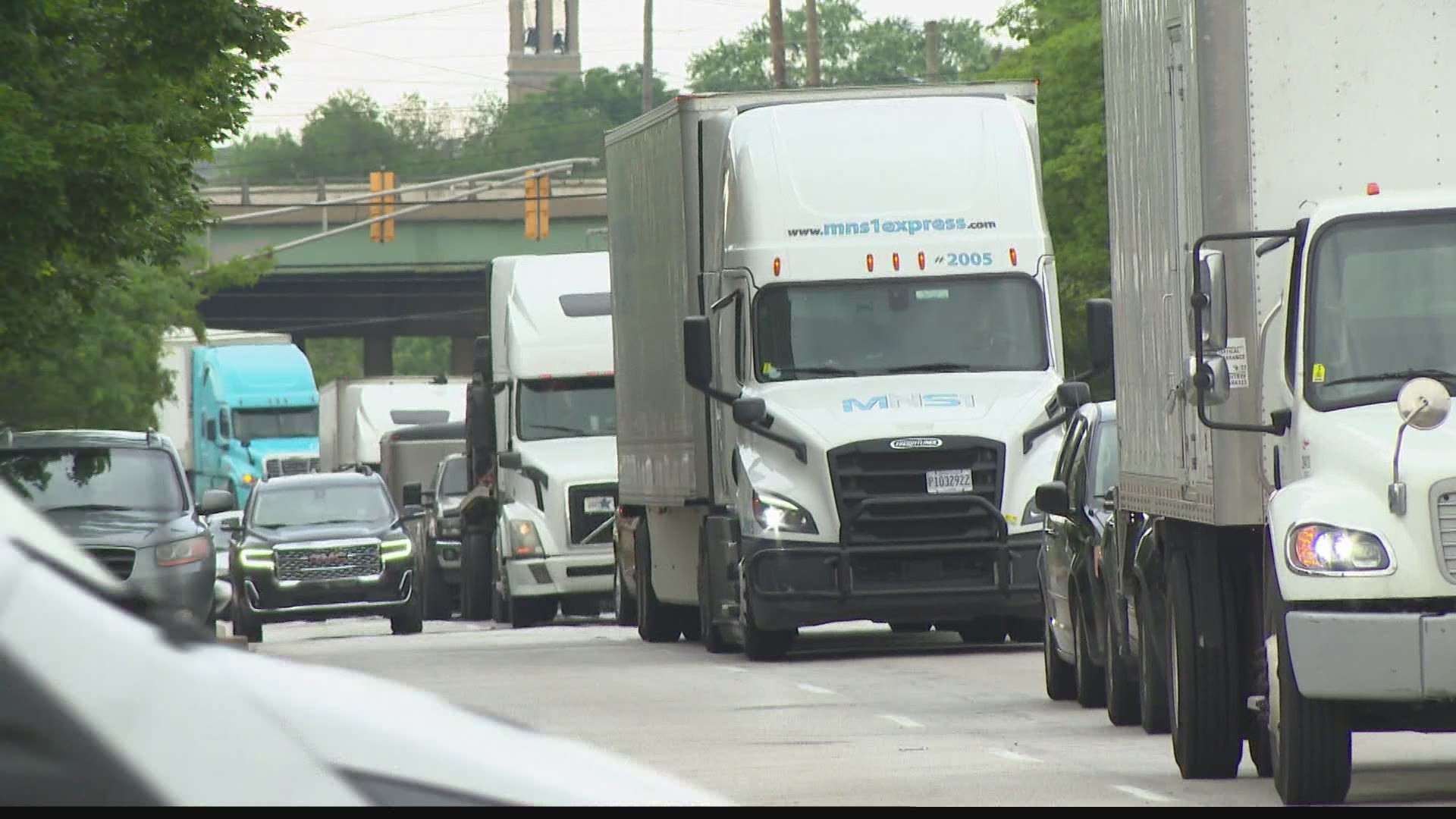 INDIANAPOLIS — A steady stream of semis get off the interstate at Ohio Street at rush hour on a Thursday night, because of construction on the North Split.

The result, slow moving traffic on some local roads and a loss of patience among some drivers.

“It’s stupid,” said one tow truck driver, who does his best to pass the time while he waits.

“Listen to music, why not,” he said, adding he’s tired of sitting in traffic, waiting for large semis which have now become a daily part of local traffic on downtown Indianapolis roads, some of them already congested from other construction improvements.

“Who else would think it would be a bright idea to do all the road construction everywhere in one little area,” the tow truck driver said, shaking his head.

It’s only been a few weeks since the North Split closed, leading to the traffic changes on downtown streets, like what people are seeing at the intersection of Ohio and East streets.

“It’s been super busy right here, specifically. Like getting to 70 or getting down south has been backed up with trucks,” said Blake Johnson, who lives downtown.

RELATED: Everything you need to know as the North Split closes for 18 months

A few weeks in now, Johnson is getting used to the increased traffic.

“Just know it’s going to take longer getting to where I need to go,” he said.

“Semi truck drivers who think it’s easier to cut through downtown than to pay attention to the signage on (Interstate) 465 and it’s really frustrating,” said Dawn Olsen.

Olsen posted a video to Twitter recently, right after she said the driver of a car hit her as she was walking in a crosswalk downtown.

“It was more like a nudge than anything else, but the fact of the matter is, both of my hands went on the hood and then, it wasn’t an immediate stop,” she said, adding she doesn’t feel safe running through downtown right now. “What makes it even harder is all this interstate traffic that’s going through downtown."

RELATED: Traffic headaches in and around downtown Indianapolis as construction season ramps up

The Department of Public Works said their engineering teams are studying the traffic patterns that are emerging downtown to see what, if anything, needs to be adjusted.

“There’s signage up around all the surrounding highways that are impacted by this to help detour semis around on 465, instead of having to go through downtown. So hopefully that’s mitigating a lot of it,” said DPW spokesperson Hannah Scott-Carter. “Semis should not have to go downtown throughout this closure."

Except they are and some pedestrians, bicyclists and runners say there are too many.

“They really shouldn’t be down here in the daylight time, because it’s kind of hard, or the night,” said one bicyclist.

It’s not just drivers and runners who are frustrated with the downtown construction projects, but also businesses along the congested roads.

“We are right off of the highway, so it’s really easy to just jump off and no big deal, and now because of that added congestion, people are forced to take different routes,” said Luke Tobias, owner of Futuro.

Tobias opened the pizza shop near Washington Street just east of I-65/70 back in March. They picked the location because of its visibility and convenience, but the traffic is causing a ripple effect.

“Because of how visible it was before, versus the way it is now, it’s definitely affected us,” he said.

Being new, Tobias is doing what he can to bring in new customers, saying every bit of business helps.