An off-duty constable has been fired for his actions toward two shoppers that were caught on video outside a north Indianapolis store. 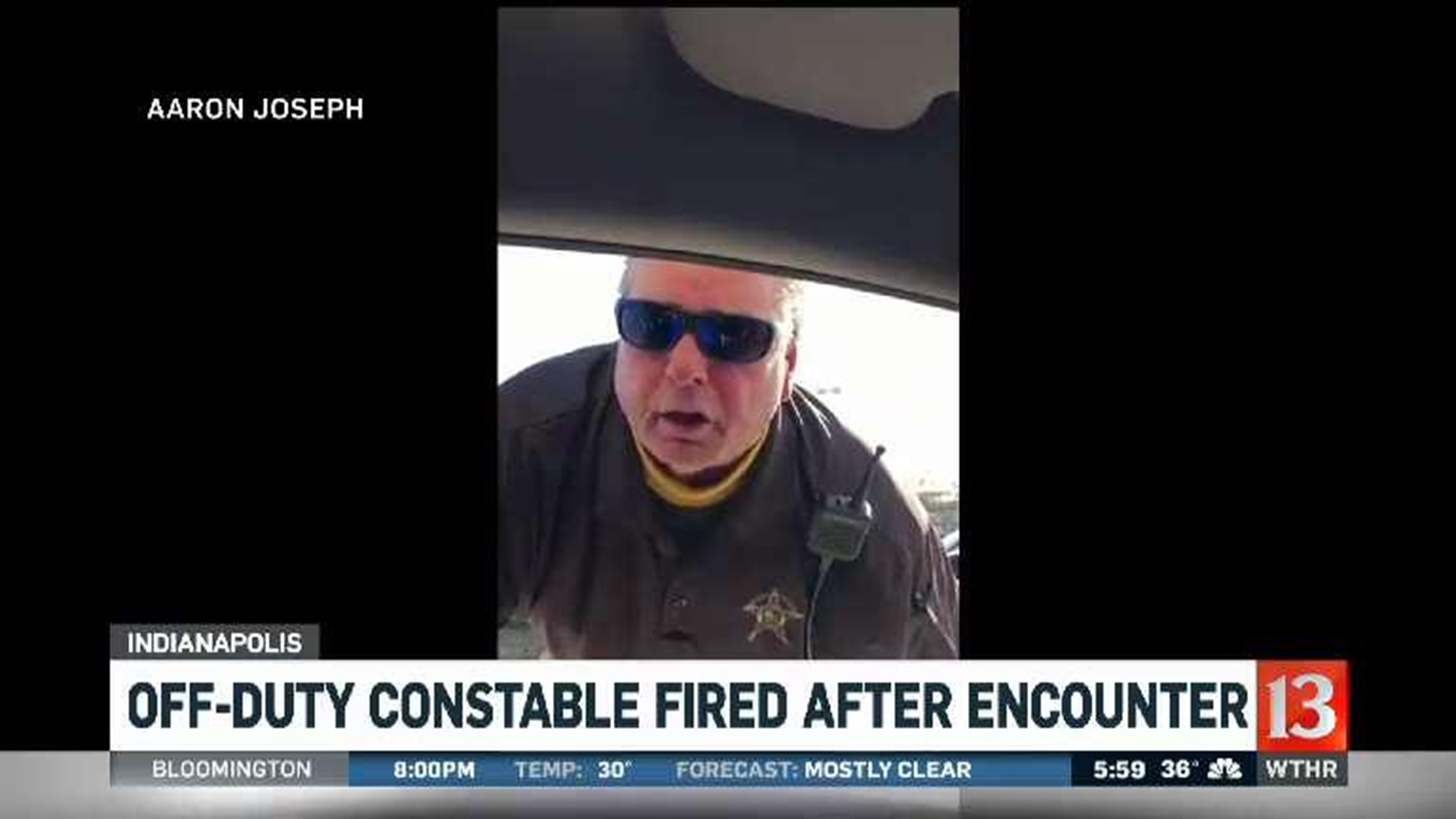 INDIANAPOLIS (WTHR) — The passenger who recorded an "off-duty constable" during a heated confrontation is speaking out.

The constable has been fired from his job.

But they claim the confrontation happened for no reason. That’s one of the reasons the passenger and the driver posted that video, saying they wanted people to know what happened to them outside Nordstrom Rack on Indy’s north side. But there is another video they want people to see other than the heated exchange.

In the video posted on YouTube and now viewed by thousands, you can see and hear Jones approach their car asking for identification. This happened after the customers say they noticed the constable looking at their license plate in the parking lot. So out of concern, instead of driving away, they circled the parking lot and pulled up to the front door on purpose.

That’s when the off-duty constable approached the driver’s side of the car and started asking for identification from the driver. The customers questioned why they were being asked for ID.

"I got my rights to do anything I want to do, I'm a police officer," Jones said.

The interaction between the two did not get any better. In fact, when you watch the video, it gets worse and tense at times. When Lawrence Township Chief Constable Terry Burns watched the video, he terminated Jones within two hours. Burns told Eyewitness News that Jones worked for the previous two chief constables, adding up to about 20 years of service. Burns confiscated the badge, radio and constable identification from Jones.

Aaron Joseph posted the video on YouTube which, went viral right away. He’s heard from people all over the country and more importantly local people concerned about what happened to him and his cousin.

"I have support from a lot of people, and some of them are even other law enforcement officers," Joseph said. "So I don’t want people to think that all cops are bad or he represents all officers. There are some really good officers out there who would never treat people that way."

Joseph, the passenger in the car, and his cousin had purchased two carts worth of merchandise from the store and had so many bags, they accidentally left one bag at the register. It was Joseph's first time in the store, but his cousin is a regular who some employees even know by name.

They had no idea their shopping day would almost cost them their freedom. But they are grateful they have the video to back up their story about what happened.

"I'm stopping you because you're suspicious," Jones said.

Joseph and his cousin replied, "Why are we suspicious?"

"What did you come back around for?" Jones said.

The constable, according to the customers, never explained the suspicious behavior and threatened to take them to jail.

"Get your driver's license out now or I will lock you up," said Jones.

“There was nothing suspicious about what we did and nothing to cause any eyes to be on us," said Aaron Joseph.

But the video outside Nordstrom Rack isn't the only video Aaron wants people to know about. He also recorded with his phone while inside the store. He told Eyewitness News he noticed Jones staring at them and watching them very closely while they shopped.

As they paid for their items, video shows Jones standing guard. The video shows them at the cash register for several minutes before the camera pans over to Jones near the exit.

"He followed us out of the store and the video speaks for itself from that point," Joseph said.

Eventually, an IMPD officer responded to the store to Jones' call on the radio for backup. The officer explained that he is not familiar with the off-duty constable, but the video shows him asking questions and gathering information from both the customers and the constable.

Eventually, you can hear the IMPD officer tell Joseph and his cousin, "as far as I'm concerned, you guys are good to go."

"Just because a real police officer showed up and realized we did nothing wrong and sent us on our way doesn't vindicate how we were treated," said Joseph, "I feel like the IMPD officer should have at least given us a way to file a complaint or some kind of victims card. He did make suggestions, but we still have been violated and did nothing wrong.”

Even after learning the constable lost his job, Joseph wants more justice. He is warning other people, especially young black males like his 17-year-old son to stand up and know your rights when it comes to how law enforcement officers are supposed to treat you.

"We all know what it is," Joseph said. "It's profiling from the beginning."

Joseph and his cousin are now talking to an attorney about the incident.