A tornado outbreak appeared to pass through central Indiana Monday evening - and the first signs of damage came from Hendricks County. 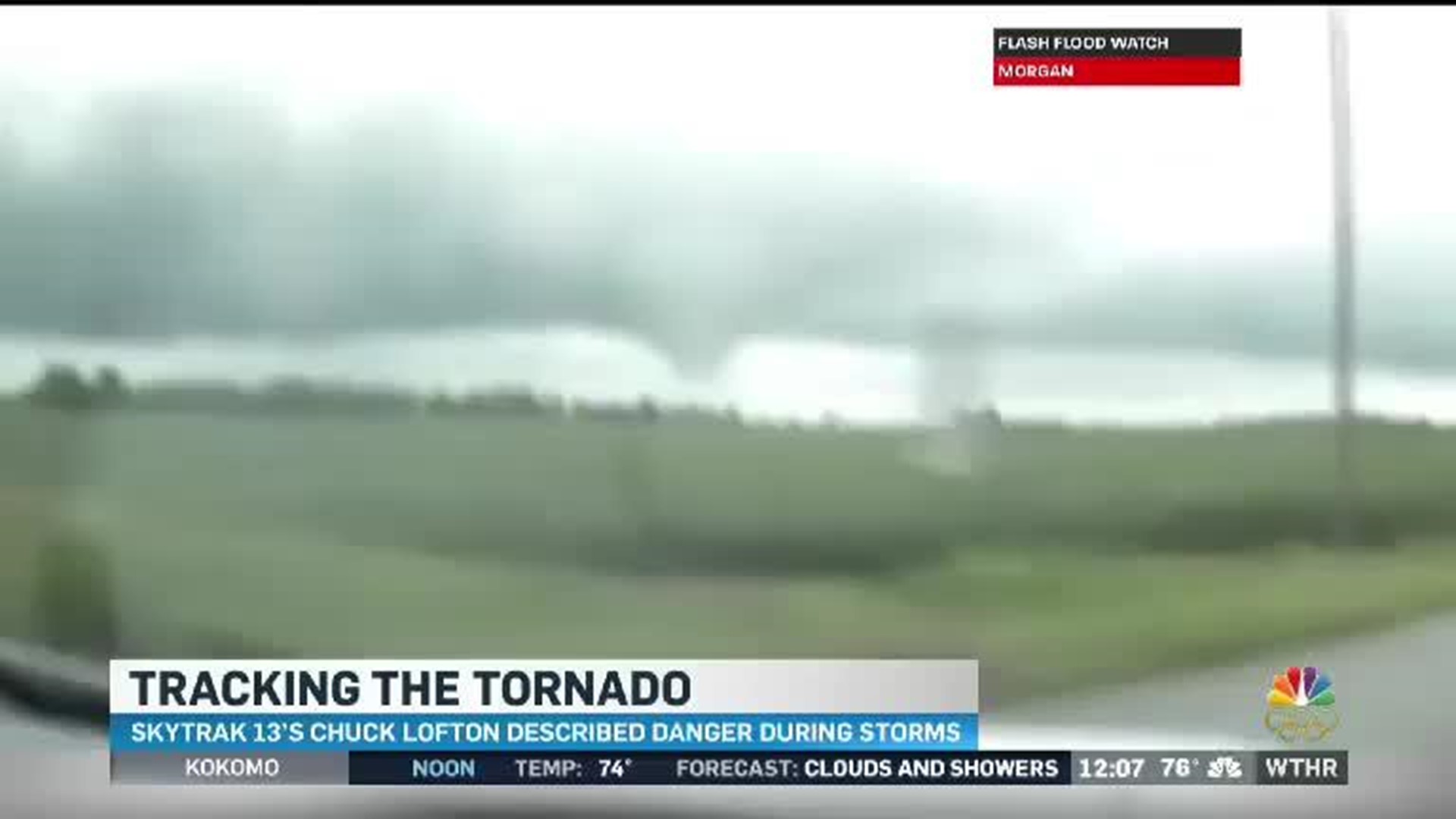 The entire tornado outbreak appeared to begin in Clayton, then cause damage in neighboring Avon and Brownsburg.

"I was in my bathroom and I heard the wind picking up and the trees were doubling over and I headed down my hallway," White said. "It sounded like all my windows were coming out."

She said it happened fast. Then she looked outside.

"All of this and I couldn't believe it. I just could not believe it," White said, surveying the damage at her home.

A possible tornado ripped off roofing, tore out dozens of large trees and tossed her patio furniture toward the driveway. One of the posts that used to hold up her porch was blown out and landed about 50 yards away.

White's neighbors took video of the possible twister in Clayton. But White huddled in the center of her home, staying safe.

"I was scared. Scared," White said.

A few streets away from that home in Clayton, Eyewitness News found more damage - more trees and power lines toppled in someone's yard. We also spotted a cornfield that had been flattened by strong winds. It carved a clear path right through the crops.

In Brownsburg, a massive clean up was underway Monday night.

The Rolling Acres neighborhood has a different kind of tree-lined street now. Limbs and branches are everywhere. Houses took a hit, too.

Eighty-five-year-old Rosi Dakin was at church when the twister came through. Her home isn't even safe to stay in right now.

"That is loose," Dakin said, pointing out the large overhang near her front door that's missing nearly all of its posts. "It's the only thing holding up the roof. That roof, the top of that could go right into the house so they (my children) are making me leave."

Right next door to Dakin, there's a pontoon boat flipped on its top in the Meharry's front yard.

Problem is, the Meharry's don't own a pontoon boat. Their neighbors do.

"No, that boat is from the house next door there," Dakin said.

"It just flew in, yeah," her son Jeff added.

Lisa Meharry, who's visiting her mom this week from Florida, was in the house with her mom when that happened. They didn't see the boat fly by, but they certainly heard the storm.

"The rain was really hard. And then it got quiet. It sounds like a roar just like they tell you it will and the house shook a little bit and then it's done," Meharry said.

Neighbors say they saw not one, but two, funnel clouds cause this damage. They're just glad no one was hurt.

While DHS confirmed the tornado Monday night, the National Weather Service traditionally does not complete their storm damage surveys until the following morning, when they will confirm if a tornado did, in fact, touch down and what class of storm it was.

A confirmed tornado was located over Danville Or 20 miles west of Indianapolis. Moving northeast At 25 MPH. Seek shelter immediately.

Barbara describes the storm that destroyed her yard in Clayton. A dozen trees down. She took shelter #INwx @wthrcom pic.twitter.com/Jiv4cdEjAh

This post came from that house. Ripped out, thrown about 50 yards from the porch in Clayton. #INwx @WTHRcom pic.twitter.com/KV1QoVpm1u

You can see where the storm cut a path through this Hendricks Co corn field. Started in a yard continued here. #INwx pic.twitter.com/rk4Fb44f7c

Please avoid the area north of 136 on 550 E in Brownsburg. Storm damage in the area. pic.twitter.com/TXlk7tTdfU

Damage all down Hammon Dr. In Brownsburg. This is not the kind of "tree-lined street" neighbors want. #WTHR pic.twitter.com/RgFSWJhSX9

This boat? Doesn't belong to that house. It got tossed in the storm. Neighbors saw 2 funnels go through. @WTHRcom pic.twitter.com/OEp5V59zqU