An Indianapolis widow outraged after seeing her husband's name and picture used in a campaign commercial says she can't get answers from the Mike Braun campaign. 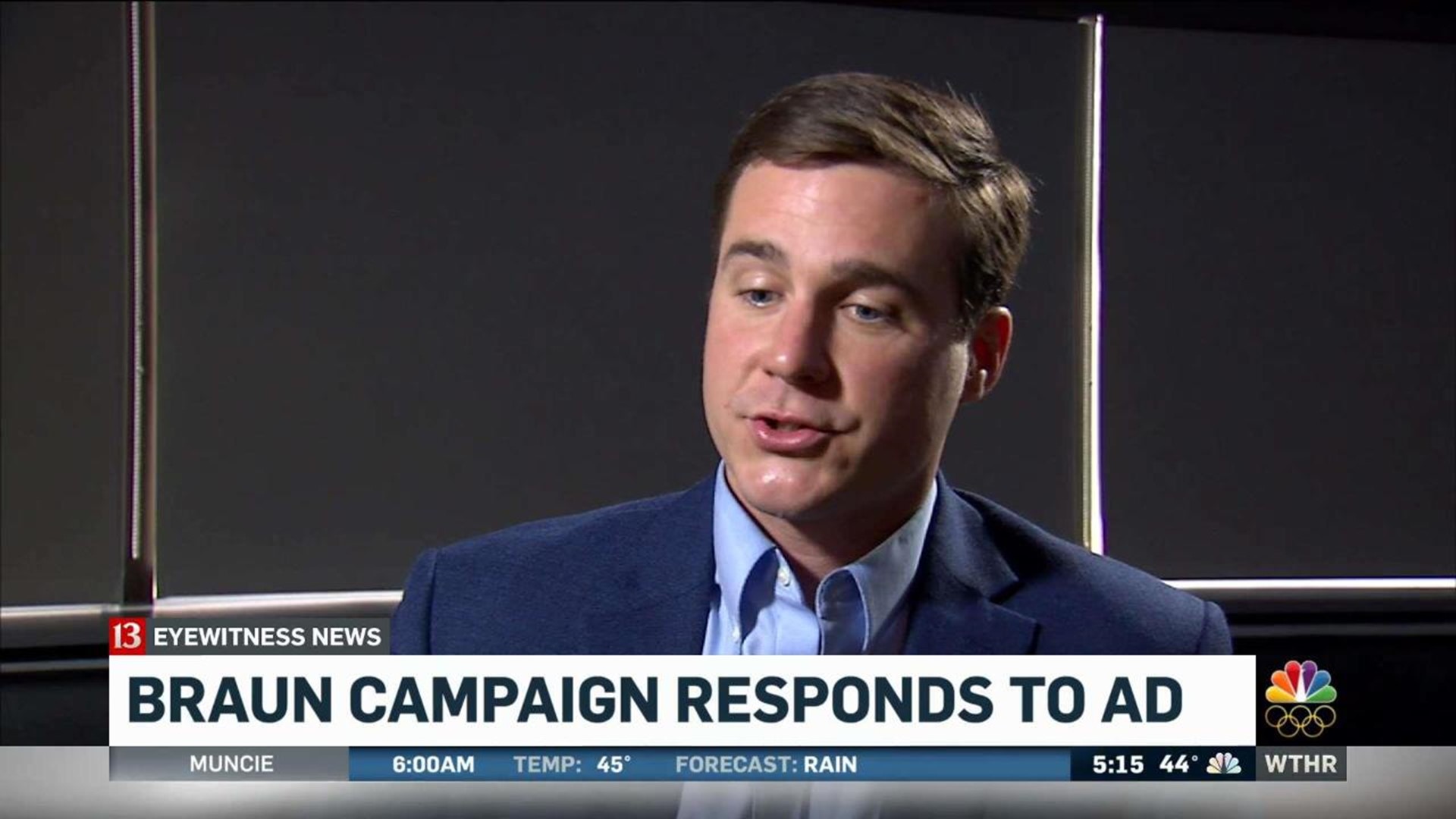 INDIANAPOLIS (WTHR) - An Indianapolis widow outraged after seeing her husband's name and picture used in a campaign commercial says she can't get answers from the Mike Braun campaign.

Eyewitness News went looking for answers Thursday. We were told Braun wasn’t available. Instead, we sat down with his senior campaign advisor. Josh Kelley appeared unapologetic and unwilling to even talk with Jeffrey Monroe's family.

What's the future of this commercial?

"This is an important debate right now and in the public," he answered, "and this is a public safety incident, so…"

So we asked again, "Will this campaign commercial continue to air as it is right now?"

"This is an important issue in the public debate right now and this commercial is going to continue to tell that message Hoosier voters," Kelley replied.

We played for him part of Deb Monroe's recorded interview and her message to Mike Braun.

"I think he's disgusting," she said Wednesday after seeing her dead husband Jeffrey in an immigration reform campaign commercial she didn't approve of.

"A drunk driver killed my husband," she explained. "I don't care if he's an immigrant."

After watching, Kelley responded, "Mike is the candidate who is going to stand with President Trump once and for all to make sure we fix the broken immigration system that's allowed dangerous criminals like this into our country."

Less than three weeks ago, Jeffrey Monroe and Colts linebacker Edwin Jackson were killed by a suspected drunk driver. Manuel Orrego-Savala, federal authorities claim is an illegal immigrant who was deported twice before.

Monroe had her own questions we asked for her.

"Who gave you permission to exploit my husband's death? This is an important issue right in the public space and a matter of public safety," Kelley answered.

Braun is in a contentious fight for the GOP nomination in Indiana's U.S. Senate race.

"And now this jerk is using his name to try to win votes," Deb Monroe said.

She also said the family never gave Braun's campaign permission to use her husband's name and picture and wouldn't.

"Mike is going to make sure we enforce all the laws we have including our broken system on immigration," Kelley replied.

"Who gave you permission to exploit my husband's death?" Monroe wanted to know.

Kelley answered, "This is an important issue right in the public space and a matter of public safety."

The real answer, Monroe said, is no one.

It's been less than three weeks since the deadly wreck. Deb Monroe's grief is compounded with anger. She's asking whether anyone from the Braun campaign will return her calls.

"Mike and his family are going to continue to pray for the victims of this tragedy," Kelley said.

"So the answer is no? I don't think she hears prayers," Rich Van Wyk asked.

"Mike and his family are going to pray for the victims and this tragedy," Kelley answered.

Indiana law protects a person's publicity rights for 100 years. Names and pictures cannot be used for commercial purposes without permission. But there are free speech exceptions that include news and politics.

There's a question of whether a campaign commercial falls into that category. One lawyer we consulted said "yes," another isn't so sure.

One editorial note - given the controversy, many people on social media have asked why WTHR and other stations would still run the ad.

Since Mike Braun is a federal candidate, as long as the ad has the proper disclaimers, like "Paid for by…" and "I approve this message…" we are legally bound to run the spot.