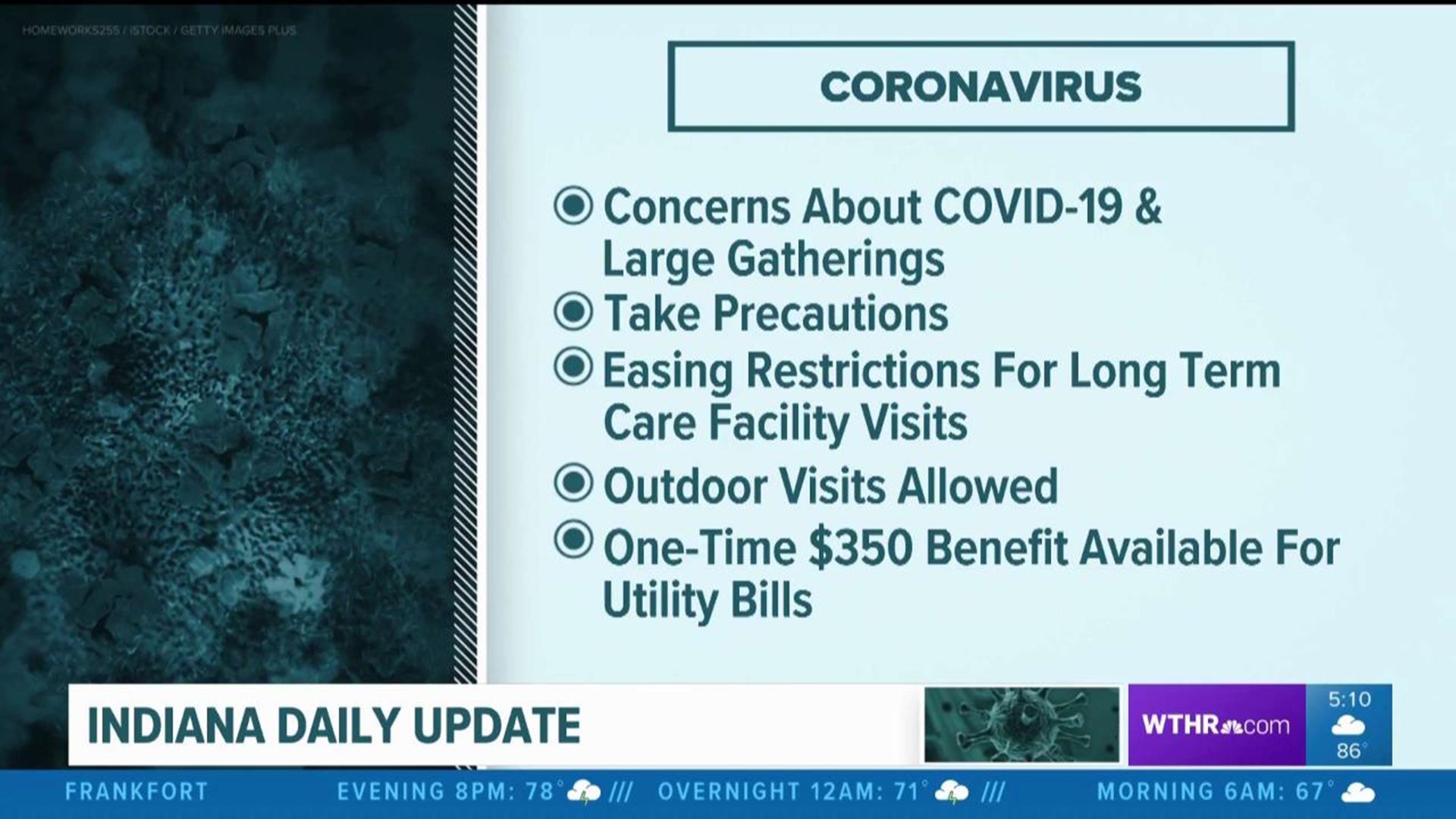 Governor Eric Holcomb and state leaders provided an update on the response to COVID-19.

ISDH said it was concerned about people gathering in large groups including the protests as a possible way to increase COVID-19.

Indiana has 511 new, confirmed cases of novel coronavirus, according to ISDH. That brings the state's total to 35,712. Between May 29 and June 2 there were 10 more deaths from the virus, totaling more than 2,000 Hoosiers who have died.

More than a quarter of a million people in Indiana have been tested for COVID-19. About 13 percent of those tests have come back positive.

Emmis communications has decided to cancel its annual Downtown Freedom Fest and fireworks, citing both public health and financial concerns factoring into the decision.

"This is not a decision we enter into lightly," the company said in a statement.

While Emmis looked into other options, the company and partner deciding canceling the event altogether was the best decision.

Indiana University Athletics is beginning the process of returning groups of its students who compete in intercollegiate athletics to campus for voluntary workouts. IU Athletics said those workouts would start June 15.

“We cannot totally eliminate the risk,” said Vice President and Director of Intercollegiate Athletics Fred Glass. “At least until there is a vaccine, there will be risk. What we can do is have the best doctors give us the best protocols and make sure they are strictly followed. That’s what we’ve done and what we are going to do.”

IU is taking advice from IU Athletics Medical Advisory and is in Phase 1 of the restart.

The students’ returns will be staggered and include a reintegration phase before any student is able to participate in voluntary workouts at Indiana University athletic facilities.

The U.S. should have 100 million doses of a coronavirus vaccine by the end of the year. That's what Dr. Anthony Fauci, a member of the White House coronavirus task force, said Tuesday according to CNN. He added that he hopes the U.S. will have 200 million doses by early 2021.

Fauci, the director of the National Institute of Allergy and Infectious Diseases, was taking part in a question and answer session with the Journal of the American Medical Association.

CNN reports Fauci said a vaccine candidate made by Moderna should enter the final stage (Phase III) of volunteer trials by the first week of July. That will involve 30,000 people. Fauci said it would include the "entire spectrum" of adults, including the elderly and those with underlying health conditions.

“The real business end of this all will be the Phase III that starts in the first week of July, hopefully, “ Fauci said. “We want to get as many datapoints as we can.”

Fauci said scientists should know by November or December if the vaccine works.

The Senate has confirmed a new inspector general to oversee money distributed as part of the $2 trillion economic rescue law, putting at least one watchdog in place as oversight of the money has lagged.

The Senate confirmed Brian Miller, a lawyer in the White House counsel’s office, on a 51-40 vote Tuesday. Democrats voted against Miller after questioning his independence from President Donald Trump, who nominated him for the post.

Miller told the Senate Banking Committee during his confirmation hearing last month that “independence is vital” for the special inspector general for pandemic recovery. He pledged to conduct audits and investigations “with fairness and impartiality.” The post would place him in charge of overseeing a roughly $500 billion Treasury fund for businesses and localities created as part of the economic rescue law approved in March.