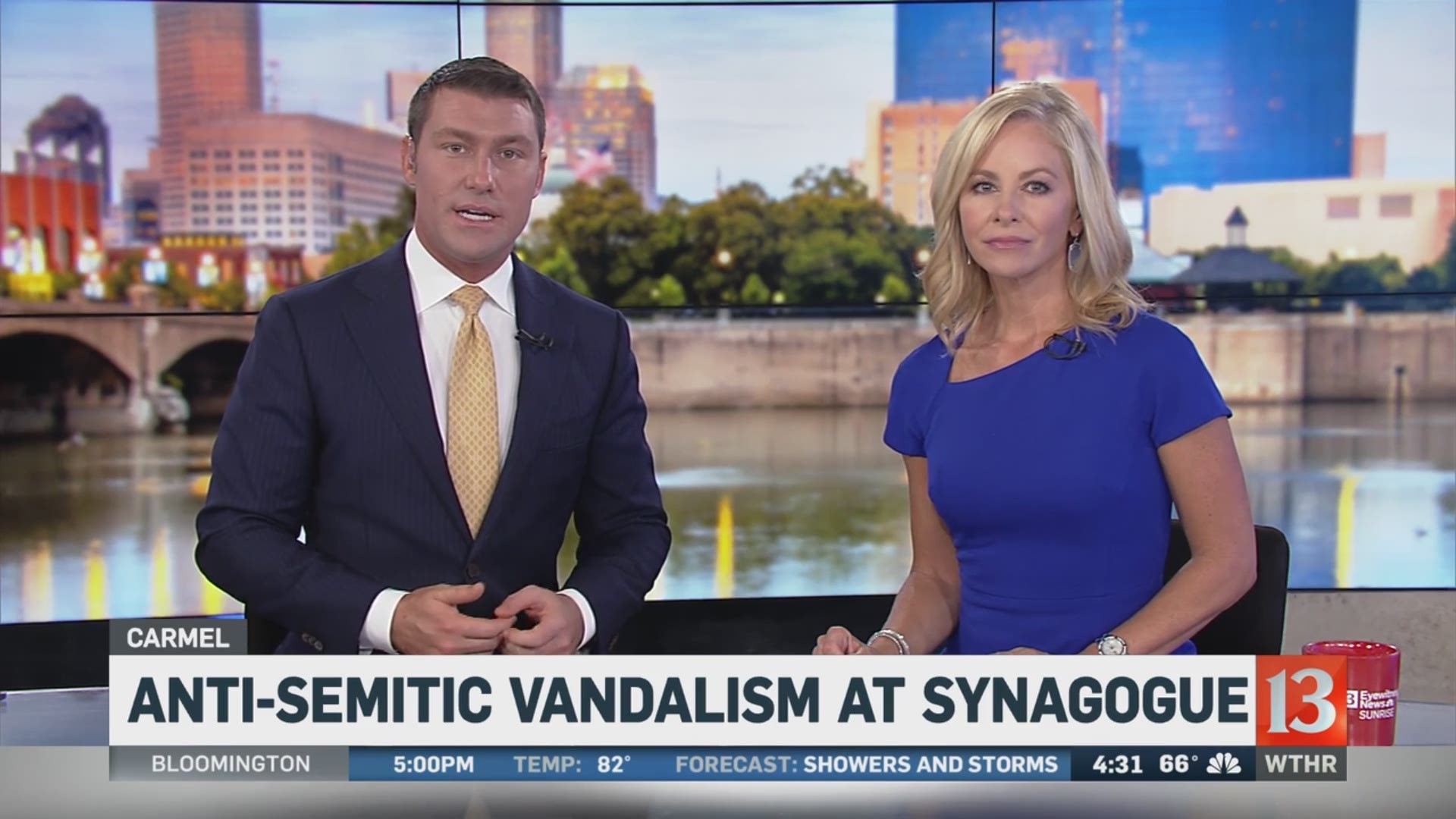 The Congregation Shaarey Tefilla posted about the incident on its Facebook page Saturday night.

“You may have heard about anti-Semitic vandalism of the shed to our garbage container at Congregation Shaarey Tefilla. While we know that the vandalism took place in the wee hours of Saturday morning Shabbat services were unaffected. Since learning of the vandalism, we have focused on working with the Carmel Police, communicating to our congregation, and working with the Indianapolis Jewish Community Relations Council and Jewish Federation of Greater Indianapolis to communicate to other congregations and other Jewish agencies to ensure that they are aware of the event and can take appropriate measures.”

Sunday, members of the congregation shared their feelings about the vandalism.

"I’ve lived most of my life in Israel and I never faced anti-Semitic [sentiments]," said Tamar Keren, who is a member of the synagogue. She and her husband stopped by on their way to the airport. They've lived in Carmel the last couple years and on Sunday, she was heading to Israel for a visit. "It’s very emotional for me to see the reason why Israel was established coming back in my face. That’s very disturbing."

"I’m first generation after the Holocaust," said Eli Keren, who is also a member of the synagogue. "My father's family is from Poland. My mother’s family is from Hungary. Ninety percent of them perished under the swastika in Auschwitz and Berkanaw and Treblinka. Some of them are still living as living testimony of what happened. So I don’t think the people who actually did this understand what it really means."

"Hate and bigotry has no place in Carmel, in Indiana, in the world," said Eli. "This does not scare us. It just enrages us. We’re not running and hiding. If somebody has something to say to me say it to my face."

"I’m Christian," said Roger Cooper, who lives in Sheridan. "I’ve pastored in this community for 10-15 years. We can’t leave any room for this kind of bigotry or hatred. It doesn’t matter if it’s my faith community that’s under attack or someone else’s. If this was happening at a mosque or a temple, at a church, it’d still be wrong."

“On Saturday July 28 one of our greater Indianapolis synagogues was vandalized by anti-Semitic graffiti. The congregation has been communicating closely with law enforcement, city officials, and its members. An official investigation has been opened at this time.”

“The JCRC is, and has been, in close contact with staff and lay leadership, offering any assistance and support they may require. JCRC and the Jewish Federation of Greater Indianapolis have also been in communication with staff and clergy at all other Indianapolis community congregations and agencies to ensure that they take all necessary precautions to further secure their facilities.”

Pictures of the Nazi-themed vandalism were also shared on social media.

"Fifty-million people perished under this swastika flag," said Eli Keren. "So if somebody has something to say to us, share some time with us here in the congregation. I’m sure they’ll change their minds."

Indiana lawmakers are also speaking out against the vandalism:

Sickened and appalled by the cowardly act of vandalism at Congregation Shaarey Tefilla; a beautiful synagogue in Carmel, Indiana where I have many good friends. Those responsible must be held accountable. These vile acts of anti-Semitism must end. https://t.co/0h6rKPilda

I condemn the vandalism at Congregation Shaarey Tefilla. There is no place for anti-Semitism, bigotry, or hatred in our communities, state, and country. -Joe https://t.co/P6Nw1ADcGI

The vandalism at Congregation Shaarey Tefilla goes well beyond a petty crime. It was a hateful act of antisemitism that goes against everything America stands for. 1/2

“This morning, I contacted Indiana State Police Superintendent Doug Carter and made sure state police offered to fully assist the Carmel Police Department and the FBI in bringing those behind the repulsive acts of desecration at the Congregation Shaarey Tefilla to justice. The cowards responsible for these crimes always hide from public scrutiny precisely because they know their actions will be soundly rejected by their neighbors and are not consistent with who we are as a society. We will work to help find those responsible and hold them accountable to the fullest extent of the law.”

“I am appalled by the despicable and hateful act of antisemitism perpetrated yesterday against Congregation Shaarey Tefilla in Carmel. I urge all citizens of Carmel, Hamilton County and throughout the state to join me in speaking out against this awful act of intolerance and bigotry. Actions like this have no place in our community and I hope the perpetrators are swiftly brought to justice.”

“Each year for the last several years I have had the honor of introducing Rabbi Benjamin Sendrow of Congregation Shaarey Tefilla to my Senate colleagues as he offered our daily prayer in the Indiana State Senate. I was shocked and saddened to learn about the recent vandalism that occurred at his synagogue."

“Everyone in the United States should feel free to worship according to the dictates of his or her own conscience without fear. Anti-Semitism is an evil that cannot be tolerated and must be confronted. It is my hope that the FBI and Carmel Police Department will find the perpetrators so they can be brought to justice swiftly. I strongly condemn this behavior and encourage all of my fellow Hoosiers to do so as well.”

At the end of the legislative session in January, Indiana remained one of just five states without a hate crime law.

The push to adopt one failed in a Senate committee.

The chairman decided not to take a vote because of disagreements over the wording.