Colts cheered on by sold-out stadium, largest crowd since 2019

Lucas Oil Stadium didn't require fans show proof of vaccination or a negative COVID-19 test to go to the game, despite President Biden asking large venues to do so. 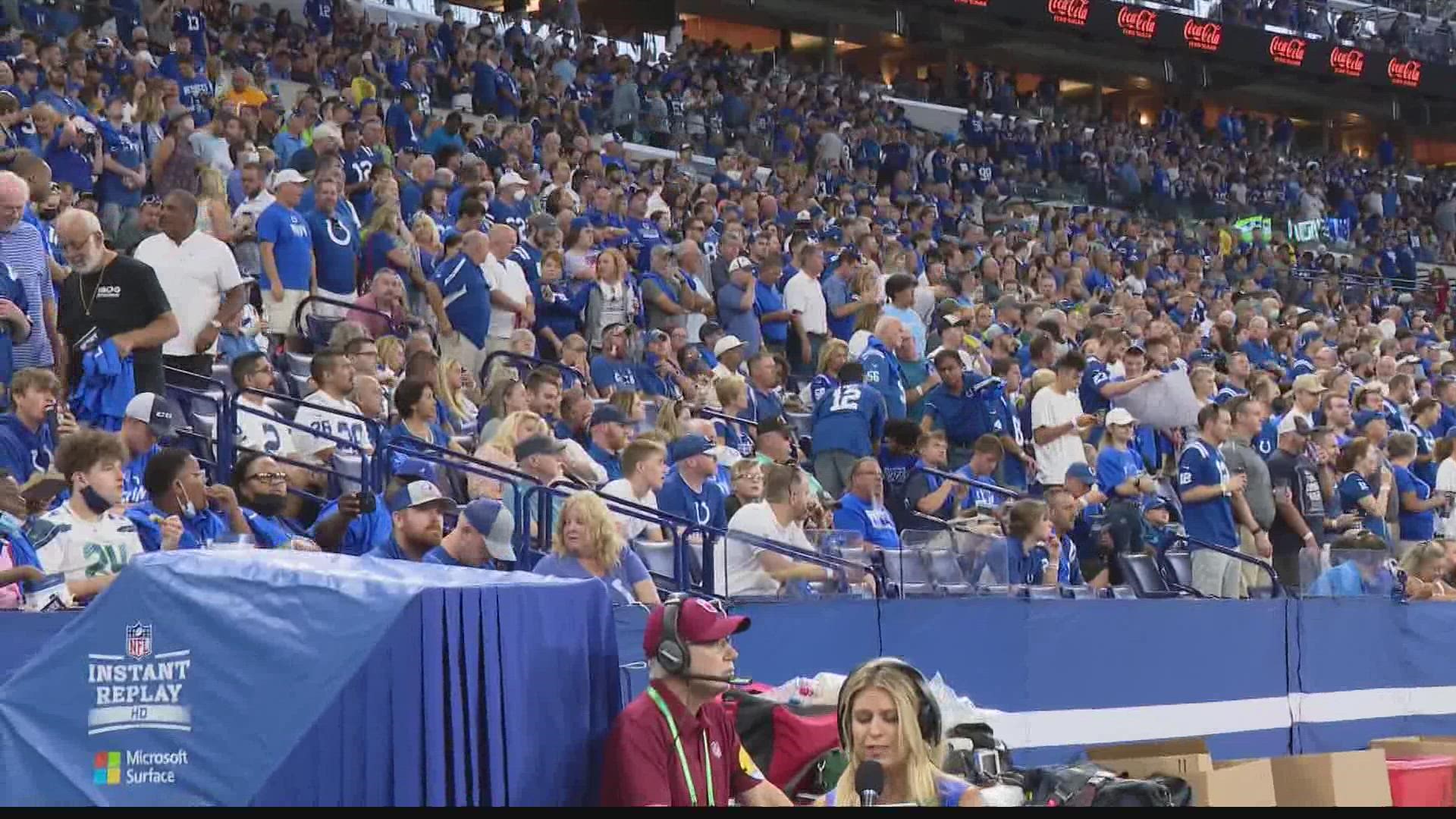 INDIANAPOLIS — A sold-out stadium cheered the Indianapolis Colts on Sunday. It was the largest crowd in Lucas Oil Stadium since 2019.

After staff restricted seating last season, thousands of people showed up for one reason— to cheer for their favorite team.

"I'm glad that we are able to still be alive and be out. And I'm glad the Colts are still hanging in there," said Colts Fan Ashley Johnson.

"It's great to have everyone back in. I think that's what brings everyone home, man. We love the environment. We love the atmosphere. We want everyone to have a great time," said Seattle Seahawks fan Logan Schell.

1 / 30
AP
Indianapolis Colts defensive tackle DeForest Buckner (99) locks arms with teammates as the American flag is pulled across the field before an NFL football game against the Seattle Seahawks, Sunday, Sept. 12, 2021, in Indianapolis. (AP Photo/Zach Bolinger)

The turnout was so large Colts owner Jim Irsay said they had to add folding chairs. While being a part of a large crowd once again might have been exciting for some fans, others were concerned.

"COVID is still around. I don't see anyone with a mask on," said Colts Fan Quintus Howard.

To protect fans from COVID-19, Lucas Oil Stadium put some safety measures in place including:

"I don't think it's enough, but I guess if everyone keeps washing, protect themselves, stay sanitized up and keep their distance, it will be alright," said Johnson.

President Joe Biden recently asked large indoor venues to require proof of vaccination or a negative COVID-19 test for entry. Some fans think that's too much.

"It's our freedom it should be our choice," said Johnson.

"God gave us free will," said Howard. "Who are we to take that from anyone?"

RELATED: 'The announcement from President Biden is a bridge too far': Gov. Holcomb responds to vaccine mandates

A spokesperson for Lucas Oil said after President Biden's announcement they didn't have any changes for the game, but they will be taking their lead from the Marion County Health Department all season long.