Severe storms have caused widespread damage across central Indiana. Trees are down on several roadways and thousands of Hoosiers are without power. 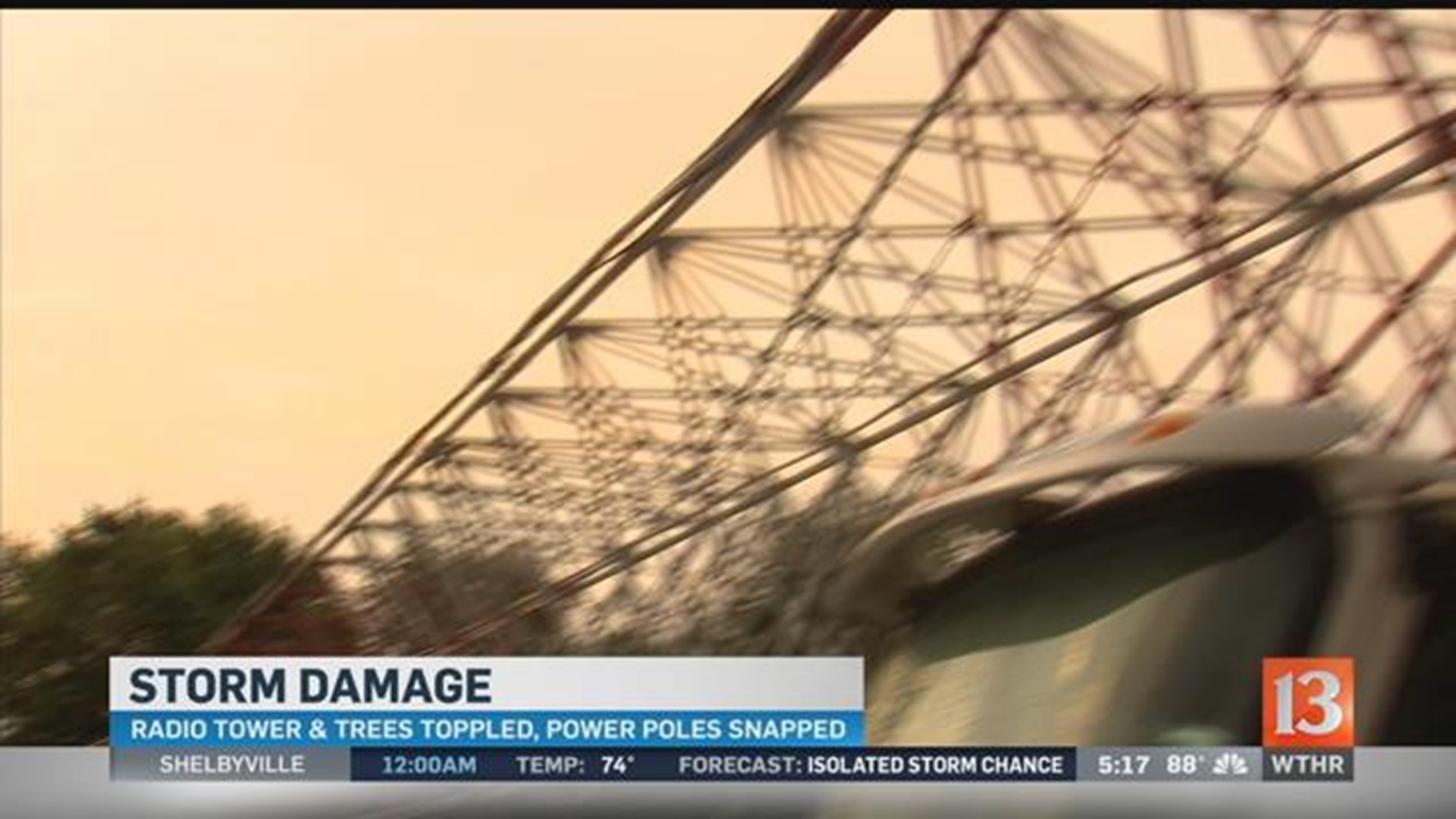 3:00 p.m. - A northwestern Indiana town buffeted by high winds has declared a state of emergency.

Brookston made the declaration Thursday morning after the entire town lost power. Two state highways in the town are blocked by storm debris. Authorities are warning people to avoid the area.

Town Marshal Troy Yeoman says storm sirens didn't sound because of the power outage. The National Weather Service says a 100 mph wind gust was recorded in the nearby town of Battle Ground.

Winds took down a huge tree and power lines at 46th and allisonville rd IPL has its hands full #wthr pic.twitter.com/QSpIY8qwCF

The owner of these cars said she heard a big bam last night #wthr pic.twitter.com/CnVDnvab3u

One tree down one car destroyed maybe two at 19th and Parker. No one hurt #wthr pic.twitter.com/nUppUGflmg

The storm took down 14 utility poles along SR 26 just west of Russiaville. Power out in the area.@wthrcom pic.twitter.com/uArufAQJRZ

Looks like we might be in the clear. Sun is about to rise over I-65, just north of Lebanon. @WTHRcom pic.twitter.com/FHSWAIxdns

Meridian at 30th reopened after DPW clears street of a massive tree limb. No injuries , 1 damaged pick up #wthr pic.twitter.com/mDu0CW8rRG

Meridian at 30th reopened after DPW clears street of a massive tree limb. No injuries , 1 damaged pick up #wthr pic.twitter.com/mDu0CW8rRG

Crews with chainsaws and heavy trucks cleared a large tree from Allisonville Road near 126th Street in a little more than an hour.

And just like that Allisonville north of 126th is open #WTHRSunrise

Most of the outages are concentrated downtown and to the north and east.

IPL crews are out this morning working to restore power to approx. 20,900 customers. Please stay away from downed power lines.

Duke Energy also reports more than 20,000 customers without power at this hour.

5:08 a.m. - A tornado watch has expired for much of Indiana, but has been extended until 7 a.m. for Dearborn, Franklin, Ohio, Ripley and Switzerland counties in southeast Indiana.

4:54 a.m. - A tree down on power lines at 46th and Emerson in Indianapolis may affect the morning commute.

4:39 a.m. - Crews are already busy working to clear a tree from Allisonville Road in Fishers.

At least six workers with chainsaws are cutting the tree and lifting the pieces over the guardrail, dumping them over the side of the roadway.

Equipment has arrived to start clearing this tree from just north of 126th and Allisonville road. pic.twitter.com/nofnHUNIsj

Work has already begun to cut up this tree blocking Allisonville north of 126th #WTHRSunrise pic.twitter.com/K6Eccl3pLR

3:59 a.m. - A downed tree in Fishers is sure to cause traffic headaches for the morning commute.

Tree blocking Allisonville north of 126th. It's going to take a while to clear this. Live report coming up. pic.twitter.com/Cn84TC2ShR

Luke Pruitt was driving on Allisonville Road when visibility dropped near zero, forcing him to pull his car to a stop against a guardrail. That move might have saved his life.

He says just after he stopped, the tree came crashing down across the road, just feet in front of his car.

"It probably would have crushed me," Pruitt said.

3:43 a.m. - A downed power line sparked a fire at Kessler and Stafford in Indianapolis.

3:33 a.m. - Residents of Brookston are getting an early morning look at damage after storms blew through early Thursday morning. At one home, a piece of barnwood pierced the side of the house.

John Watkins lost a barn and a workshop in the storm, which he thinks was more than the straight line winds earlier reported.

Flooding is also becoming a concern. Areas near Lafayette along I-65 received nearly three inches of rain in a short period of time. That rainfall came down on top of several inches of rain that fell early Wednesday.

3:12 a.m. - There are reports of trees and power lines down across parts of Marion and Hamilton counties as storms blow through.

Allisonville Rd. closed from 126th to 131st due to tree across roadway. Find alternate route.

Pea-to-marble-sized hail has been reported in Hamilton County.

2:45 a.m. - A second wave of storms is now affecting Indianapolis and the northern "donut" counties.

A Severe Thunderstorm Warning is in effect until 3:15 a.m. for Boone, Hamilton, Hancock, Hendricks, Madison and Marion counties. Storms with 60 MPH wind gusts and possible quarter-sized hail are moving across the north side of Indianapolis, passing through northern suburbs including Brownsburg, Carmel, Cicero, Fishers, Lapel, Pendleton and Fortville.

2:30am. Here are the power outages across Indiana, according to Duke Energy. #WTHRSunrise #inwx pic.twitter.com/J3q0cK9EPU

The tower is used for broadband internet service in the area, as well as ambulance communications in Russiaville.

1:44 a.m. - The high winds associated with this storm system continues as the weather moves into east central Indiana.

1:24 a.m. - Residents of north central Indiana are coming out of their homes for the first look at damage in their neighborhoods.

Heavy rain is also a concern as the storms blow through Indiana.

1:15 a.m. - A Severe Thunderstorm Warning is in effect until 1:45 a.m. for Hamilton, northern Hancock, Madison and Tipton counties. Storms with wind gusts up to 80 MPH and quarter-sized hail accompany that storm.

1:05 a.m. - A Tornado Warning is in effect until 1:30 a.m. for Huntington and Wells counties. A storm with a radar-confirmed tornado was located near Markle, heading toward Bluffton by 1:20 a.m.

1:03 a.m. - A Severe Thunderstorm Warning is in effect until 1:30 a.m. for Fountain and Warren counties. A storm with 70 MPH winds and quarter-sized hail is approaching Williamsport and Attica.

12:56 a.m. - Strong storms that have brought reported wind gusts in excess of 100 miles per hour are moving into the Indianapolis metro area.

A Severe Thunderstorm Warning is in effect until 1:30 a.m. for Boone, Clinton, Hamilton and Tipton counties.

12:55am: if you're in this zone please treat like a tornado warning. 80-100mph wind very possible #INwx @WTHRcom pic.twitter.com/UXciJtgNjb

12:31 a.m. - Heads up Carroll and Tippecanoe Counties: you're under a severe T-storm warning until 1am. Wind gusts up to 100mph and quarter-size hail possible with these storms.

Numerous trees down in White County between Chalmers and Brookston.

A county emergency manager says at least four homes and a gas station sustained damaged when a tornado ripped through central Illinois.

Livingston County emergency manager Chuck Schopp tells The Associated Press that all the injuries reported so far were minor. Two people had been trapped inside a home, but he says they were able to escape.

The canopy of a gas station near Pontiac was damaged by heavy winds Wednesday night, as were a mobile home and three homes in or near the city.

12 a.m. Thursday - The National Weather Service issued a tornado warning for Livingston County in central Illinois where there were reports of damage and power outages in the city of Pontiac.

Pontiac fire officials and the sheriff's department declined to confirm early reports of damage by high winds to a trailer park. However, Commonwealth Edison spokesman Anita Martinez said trees have brought down power lines in the city.

The outburst of severe weather in central Illinois came as the storm diminished in northern Illinois.

The National Weather Service says it received numerous reports of tornadoes west and southwest of Chicago, adding a survey will be conducted Thursday to determine the number.

Officials in LaSalle County reported minor damage after a tornado touched down Wednesday near the city of Earlville. The weather service also reported a tornado near Amboy in Lee County with no reports of damage.

Martinez said 15,000 people were without power in northern Illinois.

11:31 p.m. - As central Indiana prepares for severe weather, tornadoes are still being reported in Illinois.

While it may be after 1 a.m. before the Indianapolis area sees the rain, communities to the northwest will likely be affected by storms within the hour.

Officials in LaSalle County reported minor damage after a tornado touched down Wednesday near the city of Earlville, northwest of Seneca.

A tornado watch was in effect until 1 a.m. Thursday for Grundy, Kankakee and Kendal counties in Illinois and 2 a.m. in Lake, Benton, Jasper, Newton and Porter counties in Indiana late Wednesday.

10:33 p.m. - A tornado watch has been issued until 5 a.m. for much of northern, central and eastern Indiana.

9:50 p.m. - Officials in LaSalle County in northern Illinois say they are receiving reports of minor damage after a tornado touched down near the city of Earlville.

The LaSalle County Emergency Management Agency says it received reports late Wednesday of tree branches littering the streets of Earlville, but no reports of damage to homes or businesses.

The National Weather Service reports a tornado also touched down near the city of Amboy in Lee County. The Lee County Sheriff's Department said late Wednesday no reports of damage have been received. Small towns in the area southwest of Chicago are surrounded by farm fields.

A severe thunderstorm warning has been issued for areas west of Chicago and for central and southern Cook County, which includes the city.

9:25 p.m. - The National Weather Service reports a tornado has touched down near the northern Illinois cities of Amboy in Lee County and Earlville in LaSalle County.

The Lee County Sheriff's Department said late Wednesday no reports of damage have been received. However, residents in LaSalle County have been advised to take shelter as the tornado moved to the east.

Small towns in the area are surrounded by farm fields.

The severe weather moving also forced fans attending the Copa America Centenario soccer game at Soldier Field in Chicago to seek shelter beneath the stands. Officials say the game is expected to resume around 9:30 p.m. CST.

A severe thunderstorm warning has been issued for areas west of Chicago and for central Cook County, which includes the city.

9 p.m. - While eyes are on the northwest, there is one cell of storms moving across south central Indiana.

8:55 p.m. - Tornadoes have been reported in northern Illinois as part of a weather system that will threaten Indiana late Wednesday night.

A confirmed #tornado is on the ground 7 miles west of Paw Paw moving east at 20 mph. Take cover immediately in the path! #ilwx

8 p.m. - A tornado watch has been issued until 2 a.m. and several Indiana counties are included.

The watch area includes Benton, Jasper, Lake, Newton, and Porter counties. Storms are beginning to form over states to our west, which will be what we keep our eye on as the night continues.

7:20pm - storms have initiated in eastern Iowa and NW Illinois...we will track these closely pic.twitter.com/lqtv61Rfe1

The greatest risk for severe weather is in the northern part of the state, though central Indiana remains in play for strong - and possibly severe - storms.

See all watches and warnings here.

Sign up for Personal Forecast - Get email updates on the weather forecast several times a day.

Interactive radar - Zoom in and get a closer look at the shape and path of the storm.

Get the WTHR SkyTrak Weather app! (for Droid and iPhone) This includes radar links plus alerts.

The threat for severe weather continues and storms are starting to develop. Any individual storm that develops will contain the threat for tornadoes. Have a way to get watches and warnings this evening and overnight. Keep you television on and your cell phone charged.

In addition to individual storms that develop, we are tracking the potential for a line of storms with the threat for damaging winds over 70mph and flash flooding. Here is the timeline for the line of storms.