Charity needs help from the community to help downtown homeless

Ray and Lori Miller's mission to help the homeless in downtown Indianapolis was stopped in its tracks Sunday. 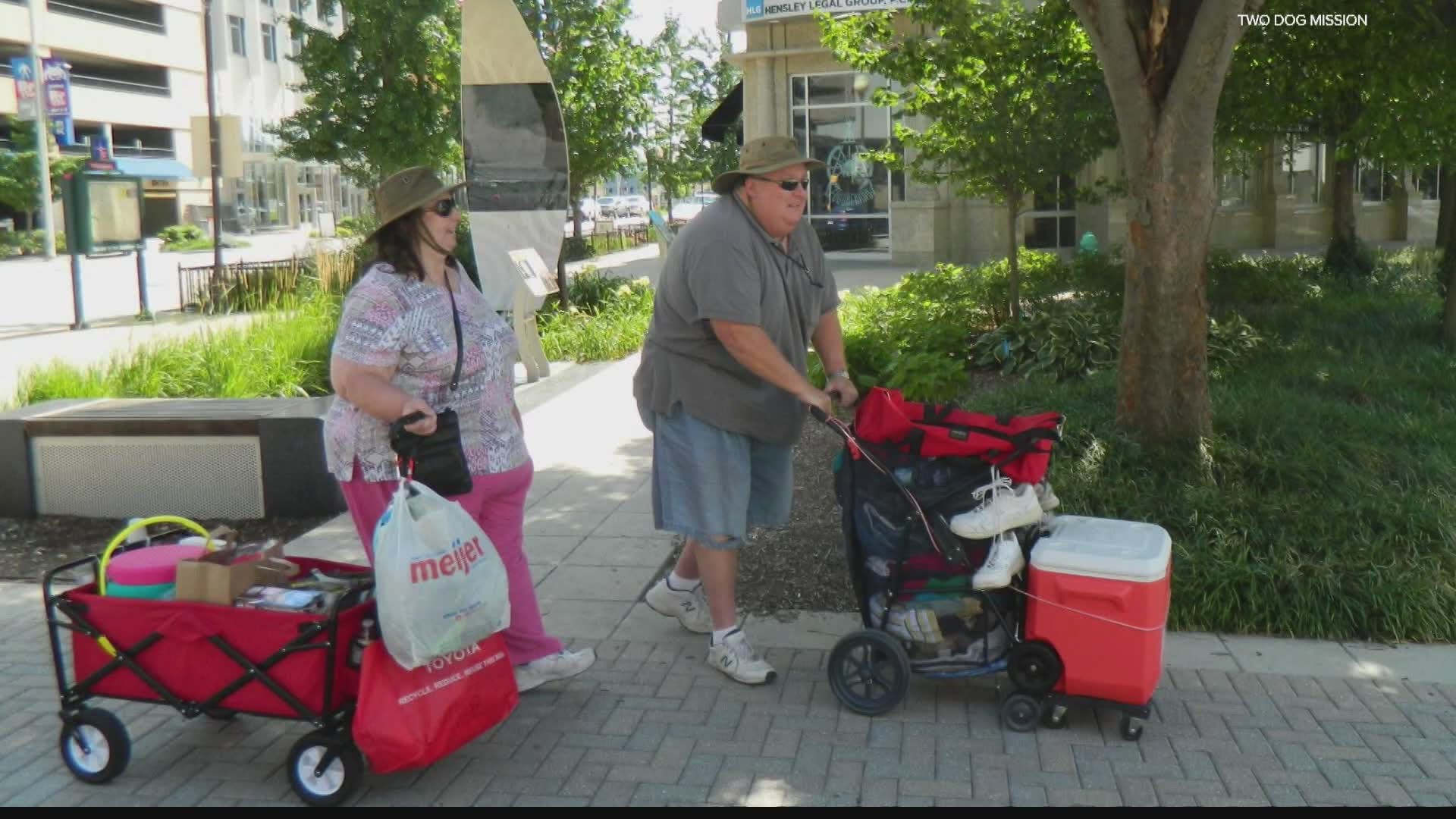 INDIANAPOLIS — A family's charity to help the homeless is now pleading for help from the community to continue its mission.

The Miller family started this organization, after a "day of caring" event with their church, seeing so many people in need downtown.

But now, they fear their days of giving are over.

Ray and Lori Miller's mission to help the homeless in downtown Indianapolis was stopped in its tracks Sunday.

"We were about 20 minutes into our service and three police cars from (IMPD) pulled in," Ray explained.

"Two Dog Mission," the charity his family founded four years ago, was told by officers they received a complaint.

The group had to pack up and close down.

They couldn't give away food or clothing on any public or private property and if they got caught again, they'd face fines or even arrest.

"Turns out that the owner of the parking lot, Denison, has decided he doesn't want us in our parking lot anymore," Ray said.

"If the owner didn't want us here, that he would have just come to us, told us personally, without making it a legal issue," Lori added.

"Now we could be fined or arrested for a second offense, without knowing or meaning to commit an offense" Ray said.

During the COVID-19 crisis, the Millers, volunteers and a Fishers catering company spent one hour every Sunday in the lot along East Washington Street.

In six months, they've helped 3,000 Hoosiers in need, double the amount served when they did their charity work mobile-only.

For years, they walked the streets each Sunday with supplies and sandwiches in carts or wagons, delivering items by hand.

But when the pandemic hit and many non-profits stopped Sunday meals, they noticed the need become greater and Two Dog Mission decided to park it in the Denison lot.

"Then we could set up service lines we could bring more food, more supplies, could serve more people. Because we weren't then restricted by the amount we could carry or push," Ray said.

The Millers say they always had support from the lot's security guard.

But since they never got written permission from Denison Parking, police say even a well-intentioned cause in an empty parking lot isn't allowed.

The city tells 13News consent on private property for something like this is definitely needed.

Also, any group that puts a cart, stand or table on a sidewalk or in the public right-of-way needs a permit from the city and one from the health department too, if food is involved.

Walking around handing out items, the city says, does not require a permit.

Two Dog Mission now hopes a downtown business will partner with them for an hour on Sundays so they can continue to serve people in need.

They hope a business will give that written consent -- to give back.

"We need to help each other," Ray said. "Without each other we're nobody and that includes the people that don't have homes."

13News reached out to Denison Parking for comment on the situation.

"Denison Parking applauds the work of Two Dog Mission. However, the fact is that Two Dog Mission has never requested consent to serve the homeless at 15 E Washington, and during the recent COVID environment, we didn't outright object. However, due to the return of customers attending events and visiting businesses, the refuse produced by the gathering, and liability concerns, we asked that the gathering be moved so we can provide unobstructed access for our customers to 15 E Washington. We wish nothing but the best for Two Dog Mission and their constituents." - Sarah Harnish, Marketing Manager, Denison Parking, Inc.

To learn more about Two Dog Mission, check out their Facebook page here.