Some charities across our state are hurting right now, despite the season of giving. 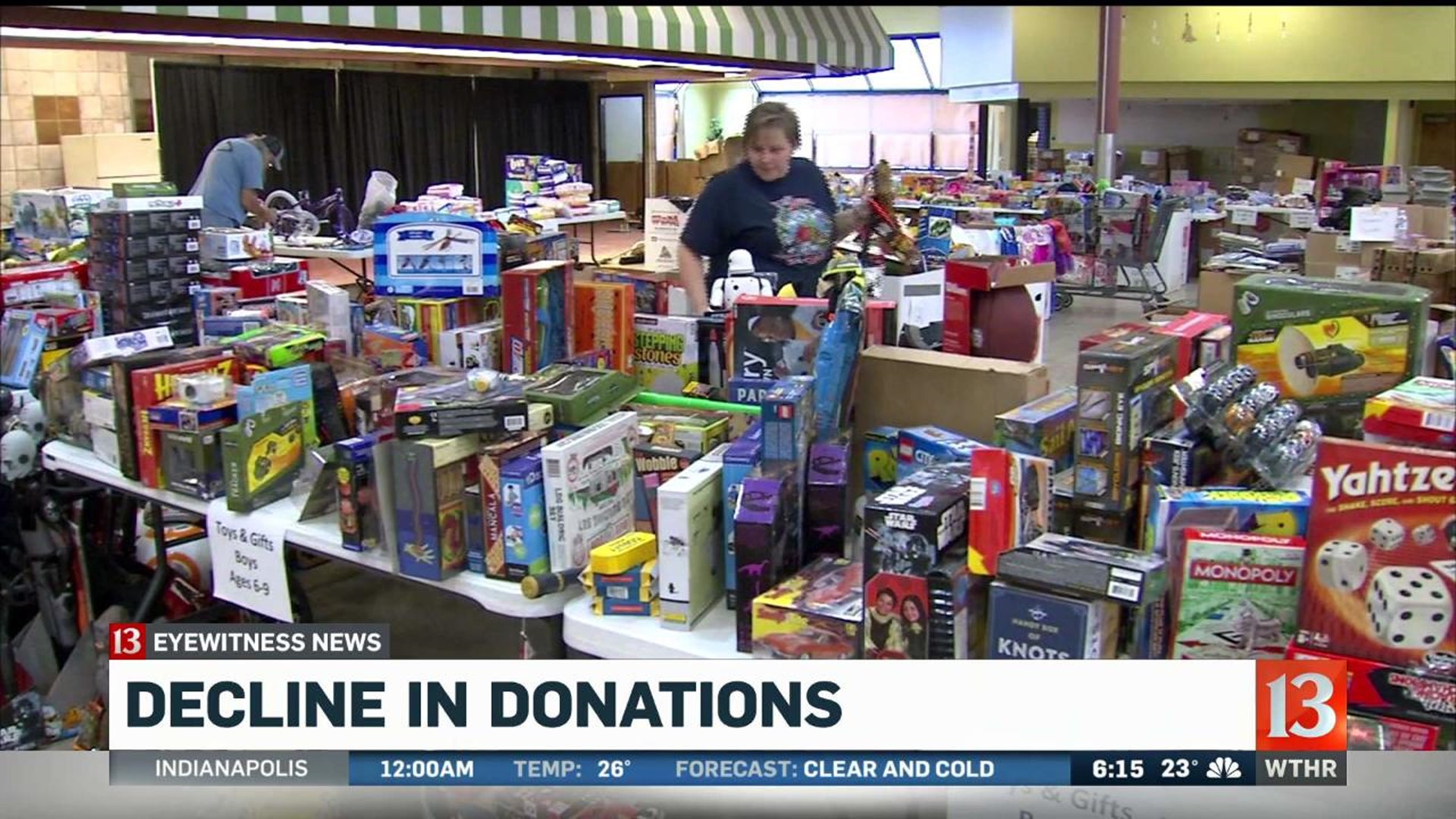 INDIANAPOLIS (WTHR) – Some charities across our state are hurting right now, despite the season of giving.

Even with the strong economy, not everyone is giving like they used to and that could hurt Indiana children in need.

The Salvation Army, for example, is now in serious need of monetary donations to make sure its Angel Tree Program helps everyone who signed up for gifts.

Two Men and a Truck brought a big haul to the Salvation Army's sorting stations Tuesday.

They unloaded corporate gifts of toys and clothing for children.

That is what volunteers like to see – big bags of donated presents for little angels in need.

"That means that those kids have been shopped for and the community has supported the program so that we can make sure kids have toys this Christmas," explained Captain Brianne Bowers, Salvation Army Indiana.

But the rows upon rows of boxes filled with presents aren't nearly enough for the more than 7,000 kids in Indy's Angel Tree program.

More than a thousand children still don't have a single toy for the holiday.

There are stacks of names with unfilled wish lists.

These "forgotten angels" may not get a Christmas because they never got a sponsor at a mall or online to adopt them.

The Salvation Army says donations are down this year, despite a greater need.

And it's not just the Salvation Army.

With a good economy and ways to give easier than ever, with mobile and online options, why the donation decline?

"Studies have shown that in a really strong economy, giving actually does go down," said Samantha Hyde, Director of Community Relations for Salvation Army Indiana." For whatever reason, it's part of human nature when you're struggling a little bit or you're seeing other people struggle, you're more likely to give."

Election year politics plays a role in charitable giving, too.

"People will donate to political causes that they believe in maybe instead of donating to a charity," Hyde said. "So whenever you're running into an election, especially a really big election year like a presidential election, people are a little bit choosier where they're sending their money. So unfortunately for charities that can mean a little bit of a dip in donations."

Plus, the tax law changes in recent years hit charities as well.

"People aren't getting the same sort of benefits from donating to charities as they used to," Hyde explained.

She says there is good news: although donations are fewer, those that do come in tend to have higher monetary value.

And money is what the Angel Tree program needs right now.

Distribution for families is next week and the payoff for kids is priceless.

"Just coming alongside those parents, so that when the kids come down they get that...there are no words for the joy that brings to myself and to people who have joined our efforts in providing those gifts to kids," Bowers said tearfully.

And now there are just days left to fill over a thousand Christmas wishes.

If you'd like to help those children who are still in need, it's so easy to do. You can do it from your phone or donate cash online.