It all started just after noon at Big Boy Hobbies on 8893 Pendleton Pike. Police say an armed robbery kicked off a terrifying crime spree that left one suspect dead, the other arrested for robbery. 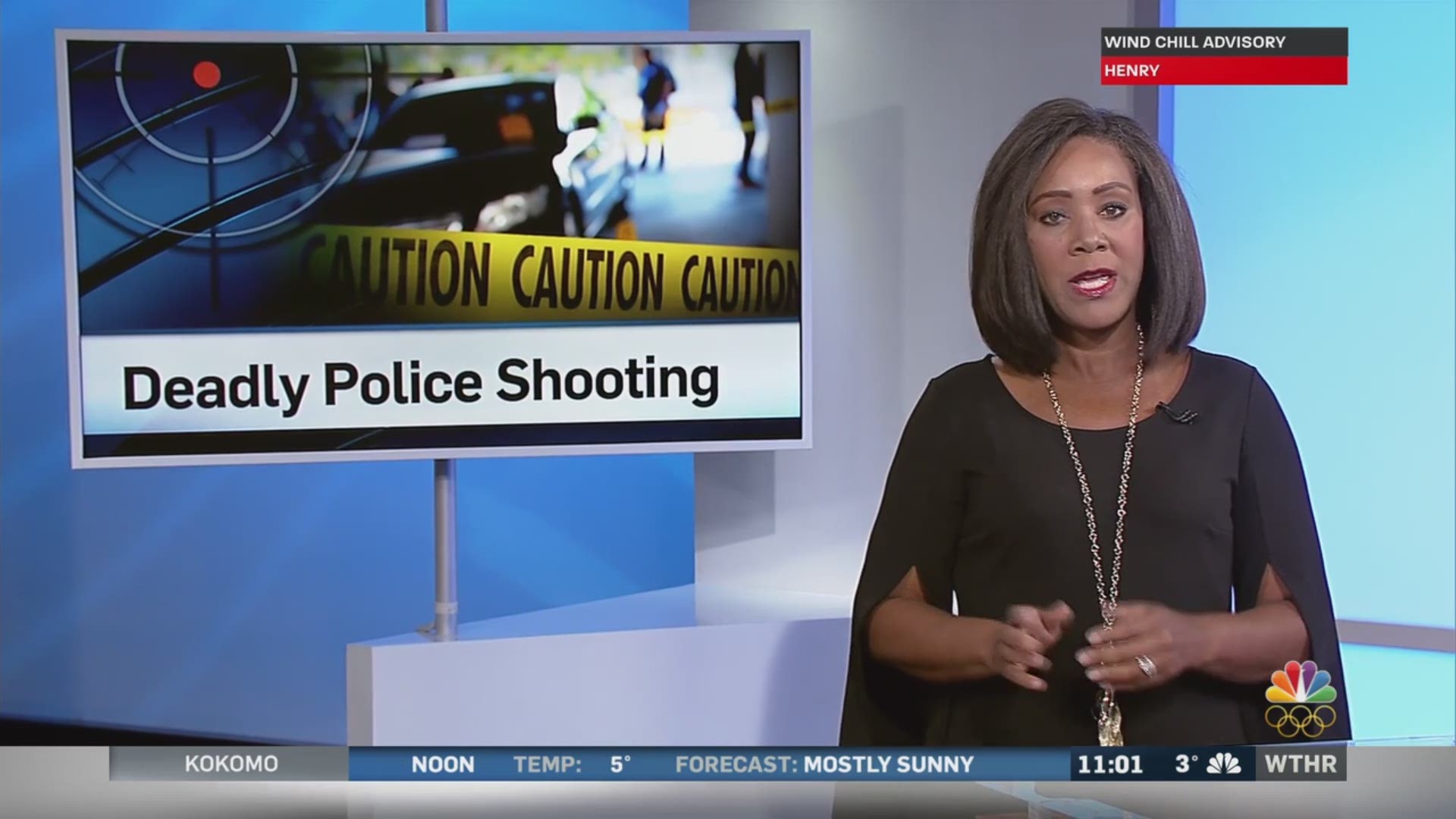 INDIANAPOLIS (WTHR) - The noontime shootout was caught on surveillance cameras. A witness described a key scene in the video: “Police approach the car with assault rifles and guns.”

It began minutes earlier when a gunman allegedly robbed a hobby store at Pendleton Pike and Post Road.

A suspect got away in a dark Mustang which he eventually crashed at 46th St. and Mitthoeffer Rd.

His accomplice left in another direction but was apprehended by Lawrence Police. That man has been identified as 28-year-old David Bean of Indianapolis, who faces a single robbery charge.

Police have not yet named the second suspect.

“(He) carjacked a second vehicle that was occupied by two individuals and continued to lead officers on a pursuit,” said Lawrence deputy police chief Gary Woodruff

Police said one of the two innocent victims in the car was able to get away.

Police said the suspect then raced back to Pendleton Pike and Post Rd. where the holdup happened. He crashed again on the median.

A surveillance camera at a nearby business shows the suspect apparently trying to pull one the people out of the car through the driver side door. Instead, an overnight bag hits the ground.

“It would seem the officers exercised some significant discipline when it came to trying to neutralize the threat and address the ongoing threat and save lives,” Woodruff said. That’s ultimately what we’re all about is saving lives.”

Police say the carjacker then fired on officers who returned fire, killing the gunman.

No officers were hurt but people in nearby business were frightened.

“I heard gunshots so I grabbed him, pushed him inside, locked the door,“ a witness told us. He said he made sure other bystanders were safe.

“Maybe 50 shots,” he said, describing the sound of gunfire. “Was going like rounds after rounds. I heard 9 millimeter and 45. It was back-and-forth.”

Investigators say it’s too early to know how many shots were fired. From the time of the crash to the last shot fired, it was over in about two minutes.

“All I was worried about was if everybody was going to be okay or he’s going to come in here and hold us hostage,” said a businessperson.

Diaz said he had a customer in his restaurant when the shooting began, some of the rounds flying through his front window. No one was hit.

Police now working on a timeline, trying to map exactly what happened and when.

The Marion County Coroner identified the man shot and killed by police as 28-year-old Jesse Scarsbrook.

Police say the woman who was carjacked by the gunman was not hurt but was checked out at a hospital as a precaution.

It all started just after noon at Big Boy Hobbies on 8893 Pendleton Pike. Police say an armed robbery kicked off a terrifying crime spree.

After police quickly spotted a black Mustang driven by the suspect, they followed it until the suspect crashed into another car at a nearby intersection. That's when the suspect got out of the car and hijacked another vehicle with two innocent people inside. Then another police chase ensued.

Over 20 units responded to the chase from Lawrence Police Department and IMPD.

Surveillance video shows the suspect losing control and crashing into a median at a Post and Pendleton Pike Roads. It appears he tried repeatedly to pull one of his hostages out of the car but was unsuccessful. That's when police surrounded the car and a shootout began.

"The driver of that vehicle, the suspect exited the vehicle with a handgun, started firing at our officers, Lawrence PD Deputy Chief Gary Woodruff said. "Our officers did return fire, striking the suspect who was declared deceased by medics when they scene was secured."

Owner of Don Marcos Mexican Restaurant, Jose Diaz, said he heard the shots fired and didn't know what to think.

"Boom. Boom. Oh my God. I think someone's trying to kill me. I don't know what's going on."

Five bullet holes tore through the front window of his restaurant, which is now closed and covered with police tape.

Moe Saleb is the business owner who shared the surveillance video with Eyewitness News. He says once the shootout began, his main focus was to protect nearby children who were hanging out during their winter break.

"I hear gunshots, so I grab him, pushed him inside, locked the door, came in here, got all the kids in here and I hear multiple — a lot of gunfire — and I was trying to make sure the kids were inside."

Woodruff says he believes his officers showed restraint during the shootout. Reports show that only Lawrence police fired shots.

"It would seem the officers exercised some significant discipline when it came to trying to neutralize the threat and save lives," he said.

Although, eyewitnesses believe they heard as many as 50 gun shots.

Police say the hostages were not injured in the shootout. The shooter was shot and killed at the scene.