The man who has taken care of the Butler University Bulldog mascots for the past 15 years went public with a personal request over the weekend. 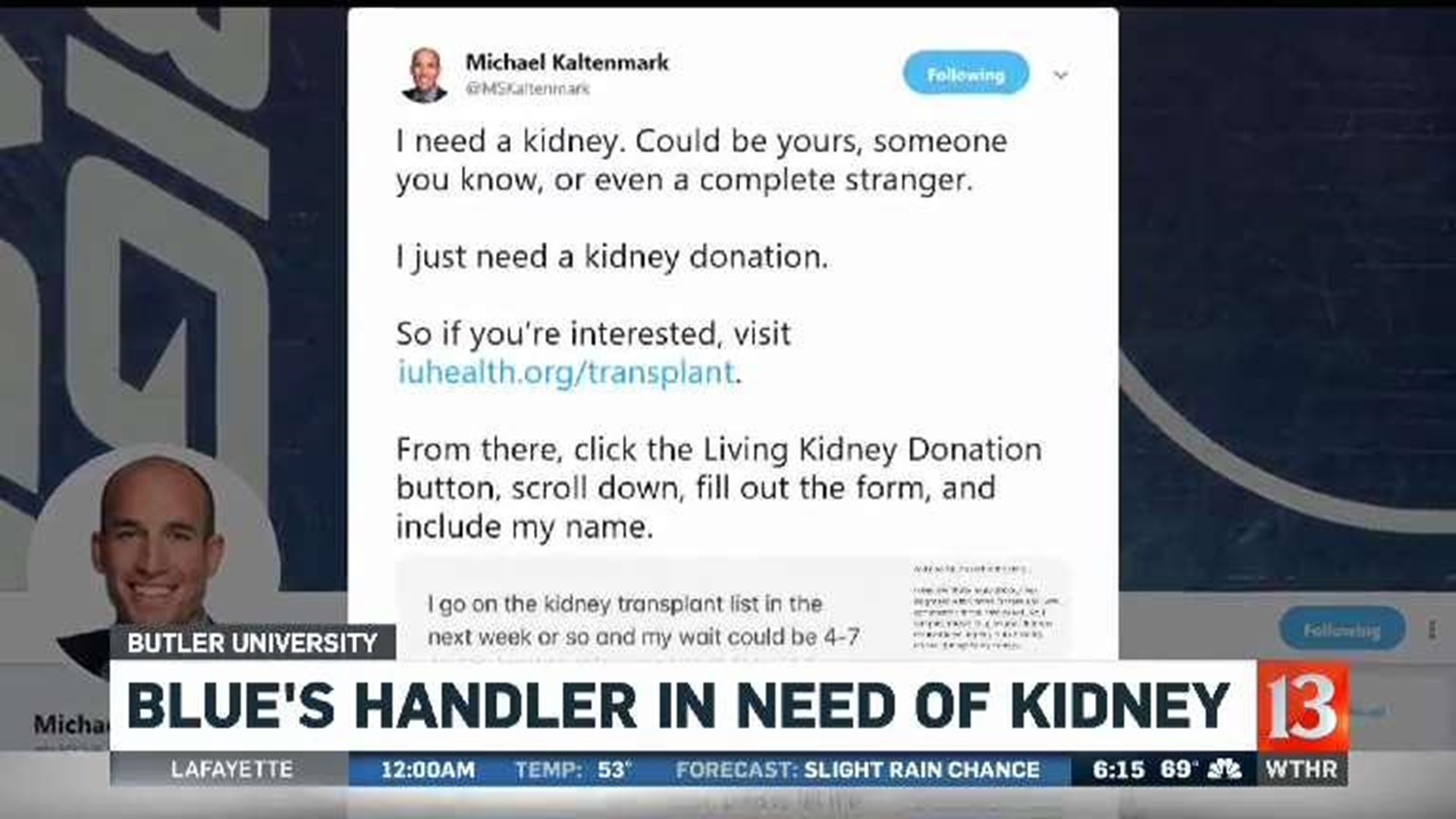 INDIANAPOLIS (WTHR) - The man who has taken care of the Butler University Bulldog mascots for the past 15 years went public with a personal request over the weekend.

"I owe those dogs a lot, and I might owe them one more time for a kidney,” said Butler University Director of External Relations Michael Kaltenmark. “We'll see."

Butler Blue III, also known as Trip, welcomed a prospective student from Las Vegas, Nevada, to campus Monday afternoon. Kaltenmark holds the leash while everyone wants to pet or take a picture with the Bulldog. Blue's handler knows the mascot dog is the star.

"I get to be almost invisible because that dog is so popular and people are so enamored with him that people usually only see me from the knee down, or they don't see me at all,” said Kaltenmark. “I'm okay with that."

The man at the other end of the leash announced on social media Saturday that he needs a kidney transplant.

"I really didn't want to leverage the dog's persona or celebrity to bring attention to my story,” said Kaltenmark. “It's just a matter of circumstance. People know me and associate me with Butler and the dog. I think that's why this is getting so much attention."

A medication Michael took for Crohn's disease irreversibly damaged his kidneys years ago. His kidney function was stable for the past 15 years. The husband and father of two sons competes in triathlons. But he felt his body slowing down last year. He went on the transplant list in December with stage four kidney failure. Stage five is the worst.

"We're bringing attention to a greater issue,” said Kaltenmark. “A lot of people are like me and they need a kidney and they don't have long to wait. That transplant list is growing every day and people are dying because they can't get a kidney soon enough."

Michael's two brothers have started the process as potential donors, but doctors encouraged him to expand his request. The reach and influence of Blue's bark quickly spread the word.

"I failed to realize that if I just spoke up people would be ready, willing to help me out,” said Kaltenmark. “That's been so overwhelming and impactful and I'm so grateful for it."

Kaltenmark has adopted a vegan diet since December in hopes of avoiding the need for dialysis before receiving a transplant.

IU Health is one of three transplant centers in Indiana. Doctors perform more than 200 kidney transplants a year at IU Health. One-third of those come from living donors.

The initial registration to become a potential donor is a simple form you fill out online. You can include the name of someone for who you want to be considered a donor.

Kidneys are the most needed organ according to the current U.S. candidate waiting list. 94,952 people are waiting for a kidney transplant.

In 2018, 6,442 people underwent a kidney transplant from a living donor in the United States. 93 of these transplants occurred in Indiana.

CORRECTION: The number of kidney transplants at IU Health was updated from 70 to 200.