More than 200 officers will be equipped with the devices by end of September. 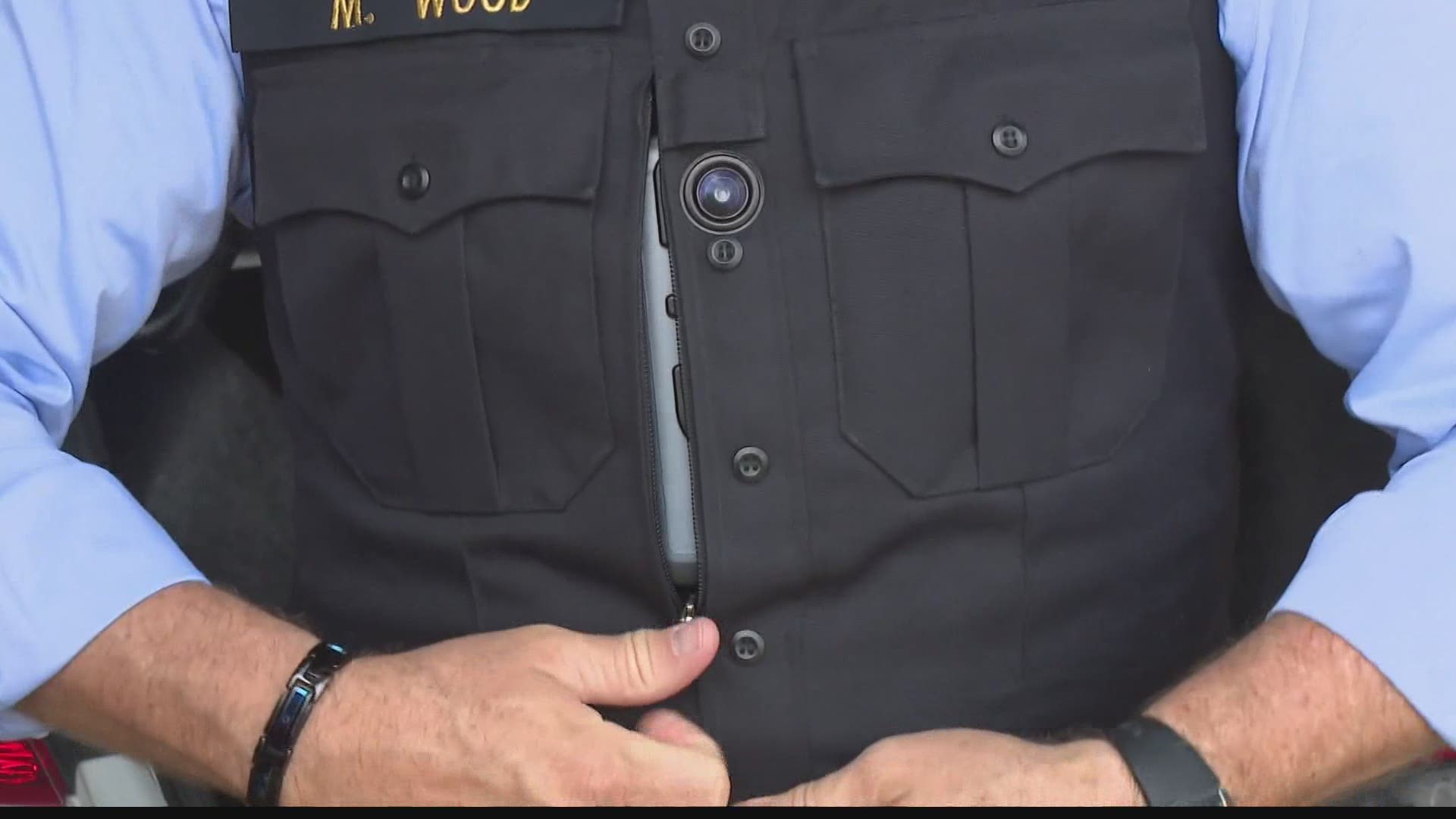 INDIANAPOLIS — IMPD’s East District was the first to roll out the city's new body cams, and after 11 days, Commander Richard Riddle said “so far, so good.”

Riddle said said many of his officers are happy with the technology.

“They’re almost relieved because there has been criticism of the police, not just here locally but nationally, and some of it is warranted. We understand that and accept that, and some of our officers are relieved to have that camera on as a safeguard to ensure that when they are doing something right, it’s recognized,” said Riddle.

“We have a little over 60, close to 70 body cams out right now across three shifts,” Riddle said. “East District has over 200 sworn officers. We look to be fully operational in East District with the body cams by middle to end of September.".

The roll out is happening in phases.

“It’s not just as simple as issuing a camera and putting it in your uniform and you’re good to go. There’s some technology that has to be put into our officers' cars, and that takes some time,” said Riddle.

Riddle said he recognized that the department faced some criticism for taking longer than some community members wanted for the body cam program to go live. He said part of the delay was IMPD's search for the most “user friendly” and “user hands off” system available.

“We wanted a system that would automatically turn on for certain criteria,” said Riddle.

IMPD’s body cams do just that. The cams can either be worn in a vest or the officers can have them outfitted to fit into uniform shirts. The body cams are the size of a cell phone. In fact, Lieutenant Scott Kulig, a body cam administrator, said they are Motorola-brand phones.

IMPD said the body cam is always passively recording. As soon as the device is secured, it lets out a low ring, similar to a "door ajar" chime in a car.

“It’s not recording right now, the camera is always passively recording, anytime we turn it on it will catch the 30 second before,” said Lt. Kulig.

13News tested that capability and confirmed that the 30 seconds before the auto-active record button was initiated was automatically captured without audio.

“There are several things that will automatically turn this system on,” Riddle said. “Arriving to a dispatch run, turning on their lights and sirens, actively running turns that system on. If an officer were to draw their weapon from their holster that body cam would turn on. And lastly, if an officer is down, or the camera thinks the officer is prone, for over ten seconds it will send an alert out.”

That alert would go out to “every officer in a 15 mile radius” and include directions to the officer, according to Kulig.

“And that’s not just for officers injured, that could be an officer having a medical condition, that could arrive from a car crash, or any incident where that officer has fallen,” said Riddle.

“If you start moving back and forth like we’re in a fight,” the body cam auto- active record will switch on, Kulig told 13News.

IMPD said another benefit to the body cam is that it can be used for training purposes.

“There is training value in that, to make us better, to only make our officers better” said Riddle.

“We’ve had some hiccups, some technology hiccups that we would expect for a project of this scope, but nothing that would stop it in its tracks,” said Riddle.

The footage is uploaded to the cloud in a matter of minutes, and IMPD is able to see the location of all their body cams at any given moment. The body cam administrator is also able to see the video and map each officer's location in real time.

Riddle said officers “have to inform individuals that they are going to be recording,” but the department said officers can turn off their cameras for sensitive interviews with witnesses.

“As long as that interaction doesn’t involve a contentious issue, there isn’t hostilities going on. If we’re just talking to a witness or talking to a neighbor about what’s going on in the neighborhood, the officer can turn that camera off,” said Riddle.

He said it’s important for officers to be able to protect witnesses.

"But there’s still that audio recording,” said Riddle, because the cameras are always passively on.

Adoption of any new technology and becoming accustomed to it takes time. If an officer forgets to turn on their body camera, “or if that technology that I talked about doesn’t automatically turn it on, our officers have to notify a supervisor.” But because the body cams are passively recording at all time, “technically they’re always on, and that footage can go back and be reviewed by our technical consultants and have that video pulled,” said Riddle.

“However, we expect our officers to know that camera is on when it’s supposed to be on,” he added.

IMPD said there will be consequences for any officer who is abusing the badge and intentionally turning off his or her body cam.

“There are disciplinary repercussions for an officer who turns their camera off when they’re not supposed to,” said Riddle.

“There’s a video and audio recording of every interaction now, so there’s no question of what happened. There may be differences in perspective, differences in interpretation of what might have been said by either party, but there can now be a third party independent review of that incident,” said Riddle.

He hopes this is a big step in the right direction to rebuilding the trust and relationship between the community with law enforcement.

“We can say, listen, we hear the community. We’re being transparent, we now have an official record of every interaction that we have with our community. And I think that’s another step to rebuilding that relationship with the community which we previously didn’t have,” said Riddle.

Riddle said the body cam doesn’t allow officers to edit their body cam footage. And the regardless of whether what the media or IMPD shares publicly is edited, the raw full video is always available on a server.

And “these (unedited) videos are going to be public record and there is a mechanism for the media and the general public to request our video footage,” said Riddle.

Anytime anyone from IMPD views that raw material, it leaves a watermark with the name and unit number “because I’m the one logged in, anytime the recording is played it leaves that watermark there so we know who was accessing the video at what time,” said Lt. Kulig. The system also keeps a detailed log of when the recording was made, when the active record was initiated, how many times the video has been reviewed, any flags or notes made by anyone and all that information can be made into a PDF.

“It’s that giant step forward (to rebuilding the relationship with the community) that we didn’t’ have before,” said Riddle.

RELATED: Metro police chief talks about his first 6 months on the job