Police released body cam video Friday of the accidental shooting of a Lafayette officer by a fellow officer. 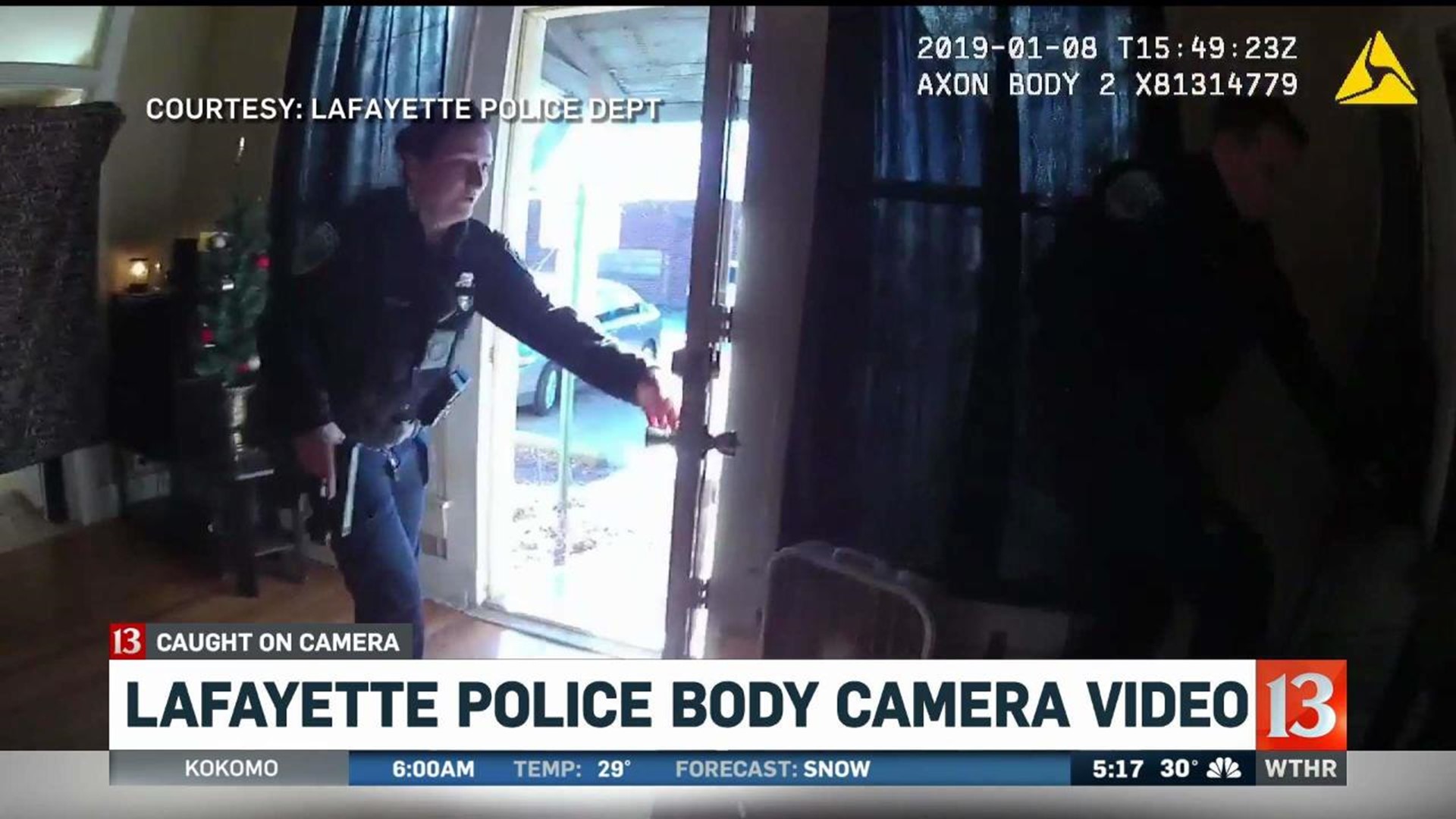 Ofcs. Lane Butler, Kurt Sinks and Aaron Wright were serving an arrest warrant Tuesday morning when an aggressive dog broke out of its cage and charged at them.

The body cam video shows Butler during the suspect search talking and maintaining control of the scene. She and two other officers responded to a dispatch call about a man wanted on a warrant being inside an apartment at 9th and Union Streets Tuesday morning.

Within a few minutes of being inside the apartment to search and clear it for the suspect who was not there, an aggressive dog escaped his cage, sending Butler and two other officers running for safety, resulting in friendly fire.

When you view the body cam video in slow motion, you can see the path of a bullet from Wright's handgun hits the door and then strikes Butler in the shoulder. The bullet struck through the outline of her bulletproof vest. The other two officers immediately rendered aid to Butler.

In the video, you see the officers first check for the wound and you can see blood from Butler on the sidewalk where she collapsed after the shooting. The two officers put her in the back of a police SUV and seconds later, the ambulance arrives. They walk her to the ambulance for transport to the hospital.

Lafayette Police Chief Patrick Flannelly got word about an officer shot during a staff meeting. They did not get any details at first, nor the exact circumstances surrounding the shooting.

"It's a call you never want to get as a police chief," the chief said. "My first instinct was to pray that the officer was going to be okay."

Flannelly learned that when the two officers walked Butler to the ambulance she was alert and talking.

The accidental shooting happened as officers searched for Corey Royster. He remained at large as of Friday afternoon. Royster is wanted for failure to appear for driving while suspended.

Wright explained to his chief that when the shooting happened, he was not trying to shoot the dog. Wright had his gun in his hand when the aggressive dog charged them because, according to Flannelly, the house had not been totally cleared during the search. Butler was keeping an eye on a closet near the front door that still needed to be checked as part of the search.

In the video, you can see a large dog which police say weighed more than 100 pounds push the cage door open. Then Officer Wright tried to keep the cage closed as the three officers exited the front door. That's when he accidentally discharged his weapon, according to police.

"We will look at that video to see if there is anything we could have done differently. I think it was a reflexive action from the officer," Flannelly said.

The police chief concluded since the video shows the shooting was an accident, Wright would not be terminated nor suspended and eventually returned to the streets.

Wright has been on the force for two years. Butler just reached her three-year mark on the police department. The chief shared with Eyewitness News that she is recovering and he expected her to return to the police force as well.