Water poured through the damaged roof, creating a soggy mess. 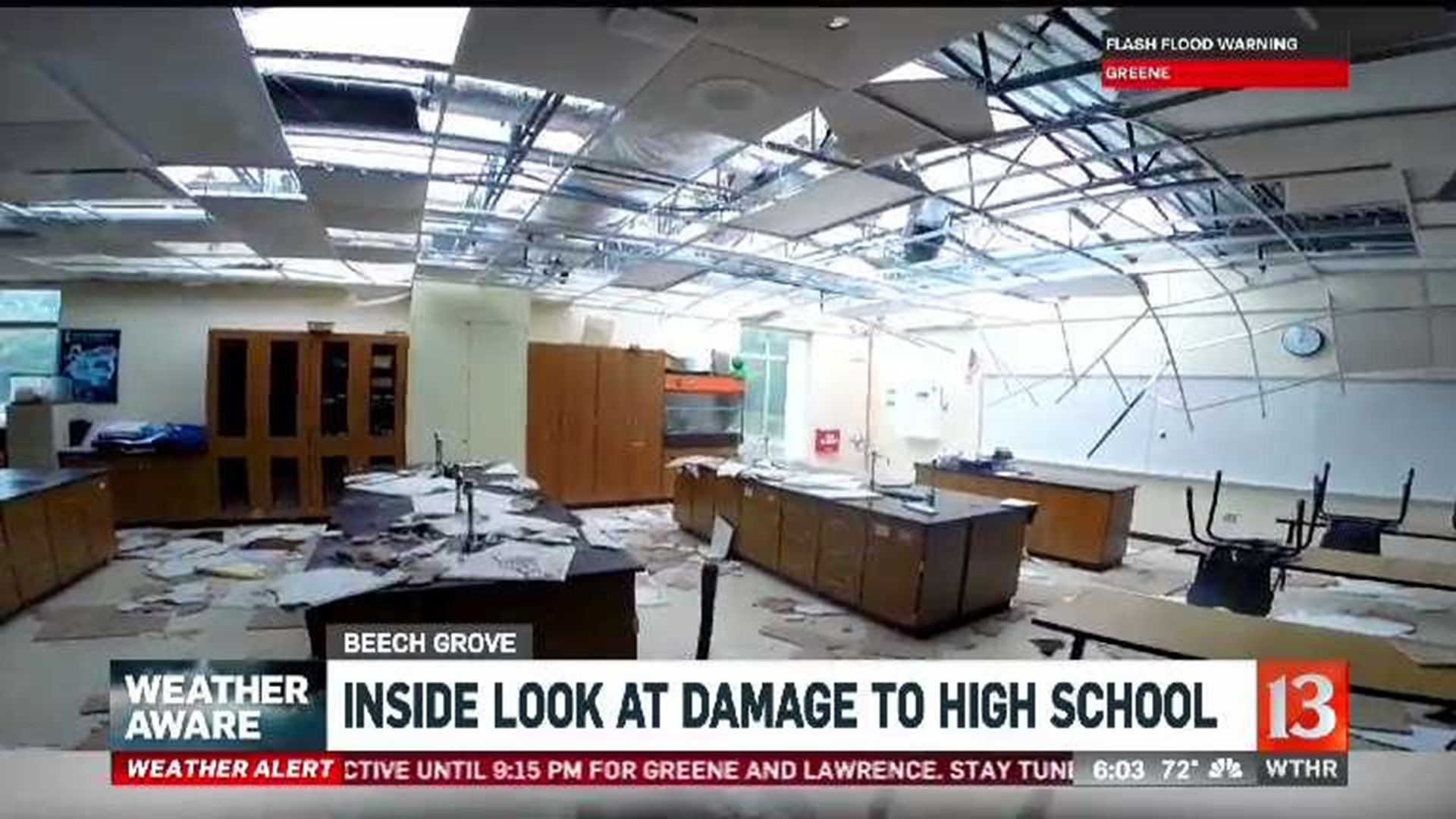 This is the worst of more than a dozen class rooms damaged when a tornado tore into Beech Grove High School Saturday night. @WTHRcom pic.twitter.com/1SInVTquMW

The superintendent of schools gave Eyewitness News an “enter at your own risk” tour of the halls and classrooms to see the damage.

“Our biggest concern is the structural damage,” said Dr. Paul Kaiser as he guided us down hallways that were underwater, slippery and dark. The only light came through gaping holes in the roof and classroom windows.

Everything was soaking wet. Water poured through the damaged roof, creating a dirty, soggy mess.

Parts of beech grove high school are a mess. There are 70’ in the roof lots of water damage @VanwykWTHR pic.twitter.com/ORCzg4SEr0

“We have 15-20 classrooms that look like this because of water damage,” Kaiser said.

The suspended ceiling was falling down. Light fixtures were broken. Ceiling tiles were all over the floor, along with pieces of the cement-block wall.

Repair crews had already counted 70 holes in the roof. In some areas, the tornado’s 100 mph winds tore up and blew away whole sections of the roof, leaving gaping holes and structural damage.

“It actually lifted the roof off the foundation, the foundation structure itself,” the superintendent said. “The blocks are cracked, and when you bend metal, it’s pretty difficult to fix that in a short period of time.”

The small Marion County school district isn’t wasting time. While we were there, a truckload of huge blowers arrived. They will be used to dry out the building.

Summer classes, sports teams and the band are being moved to other Beech Grove schools.

Giant blowers arriving at Beech Grove high school to dry out the building. Saturday night a tornado ripped off sections of the roof and caused structural damage @WTHRcom pic.twitter.com/lt8iRsuPl4

“We have contingent plans. We have athletic teams going all over the state of Indiana in different summer competitions and those will move forward," said Kaiser.

They will have to move quickly.

"Nearly 1,000 students are expected to be at their desks in less than 6 weeks,” Kaiser said. He insisted there will be no delays.

“We will start classes on July 31 in some capacity,” he said. “We will start in portable classrooms, if necessary. We will go to e-learning if we need to.”

Kaiser promised weekly updates on the clean-up and repairs.