A group of military veterans is advocating for the legalization of medical marijuana in Indiana, while a group of county prosecutors is urging state leaders to take a strong stand against legalization "in any form, for any purpose." 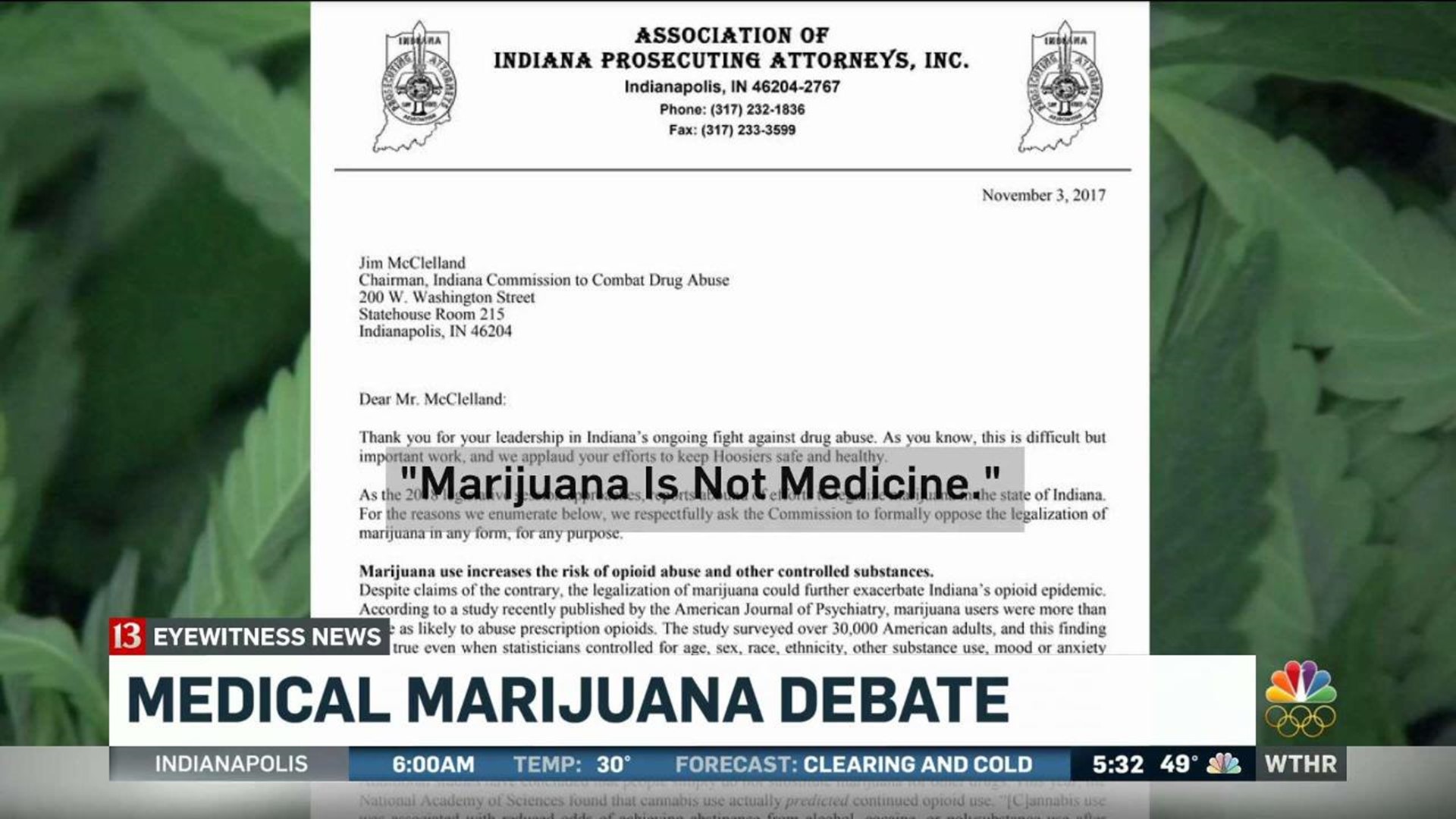 INDIANAPOLIS (WTHR) - A group of military veterans is advocating for the legalization of medical marijuana in Indiana, while a group of county prosecutors is urging state leaders to take a strong stand against legalization "in any form, for any purpose."

Veterans for Medical Cannabis plans to hold a news conference Thursday to make the case for adding Indiana to the 29 states that have legalized medical marijuana.

Jimmy Giordana said, "we're not advocating for recreational cannabis," but a safe and effective alternative to the opioid pain killers they quickly become addicted to.

"We're looking for the medical value and benefits and to get off all the alphabet soup of meds at the VA," he said.

Giordano served in the U.S. Army for eight years. He saw combat oversees while providing security for NATO. He said he suffered spine, ankle and hip injuries and was later diagnosed with PTSD, all of which he was prescribed various medications for.

Then last December, he said he was cut off the opioids and given Tylenol, which he said does nothing for the pain.

We showed him the letter the Association of Indiana Prosecuting Attorney's sent to the chairman of the Indiana Commission to Combat Drug Abuse.

It said, "despite claims of the contrary, the legalization of marijuana could further exacerbate Indiana's opioid epidemic," and, "that information purporting that marijuana is medicine is based on half-truths and anecdotal evidence."

Giordano said in response, "I've challenged someone to bring me a report where death was caused by cannabis or from cannabis overdose and no one's been able to bring me one yet."

We also shared what the governor said when asked about medical marijuana coming up this session.

Governor Holcomb said, "The FDA is the organization that approves drugs in this country," and it's not behind legalization. He added, "at this time right now I'm trying to get drugs off the street and not more into the mix, so I'm not supportive of that."

Giordano said he wasn't deterred that 11 bills were submitted last year and "we made history because there were actually hearings in committee."

He expected several bills to be introduced in the upcoming session, as well.

Giordano, who worked in law enforcement but getting into real estate, said he hasn't tried medical marijuana. He doesn't want to break the law, but he knows people who have.

"I hear a lot of stories about people who need help are already taking it, but they're getting it from the street and you don't know what you're getting sometimes," he said.

He said while legalization is an uphill battle, it's one he's committed to fighting.

"It's not just about me. It's about other veterans," he said. "And we're not just doing it for vets either. It's about the people."