Avon leaders question why construction is delayed on main road

Construction on U.S. 36, which was supposed to be completed this December, will continue through next year. 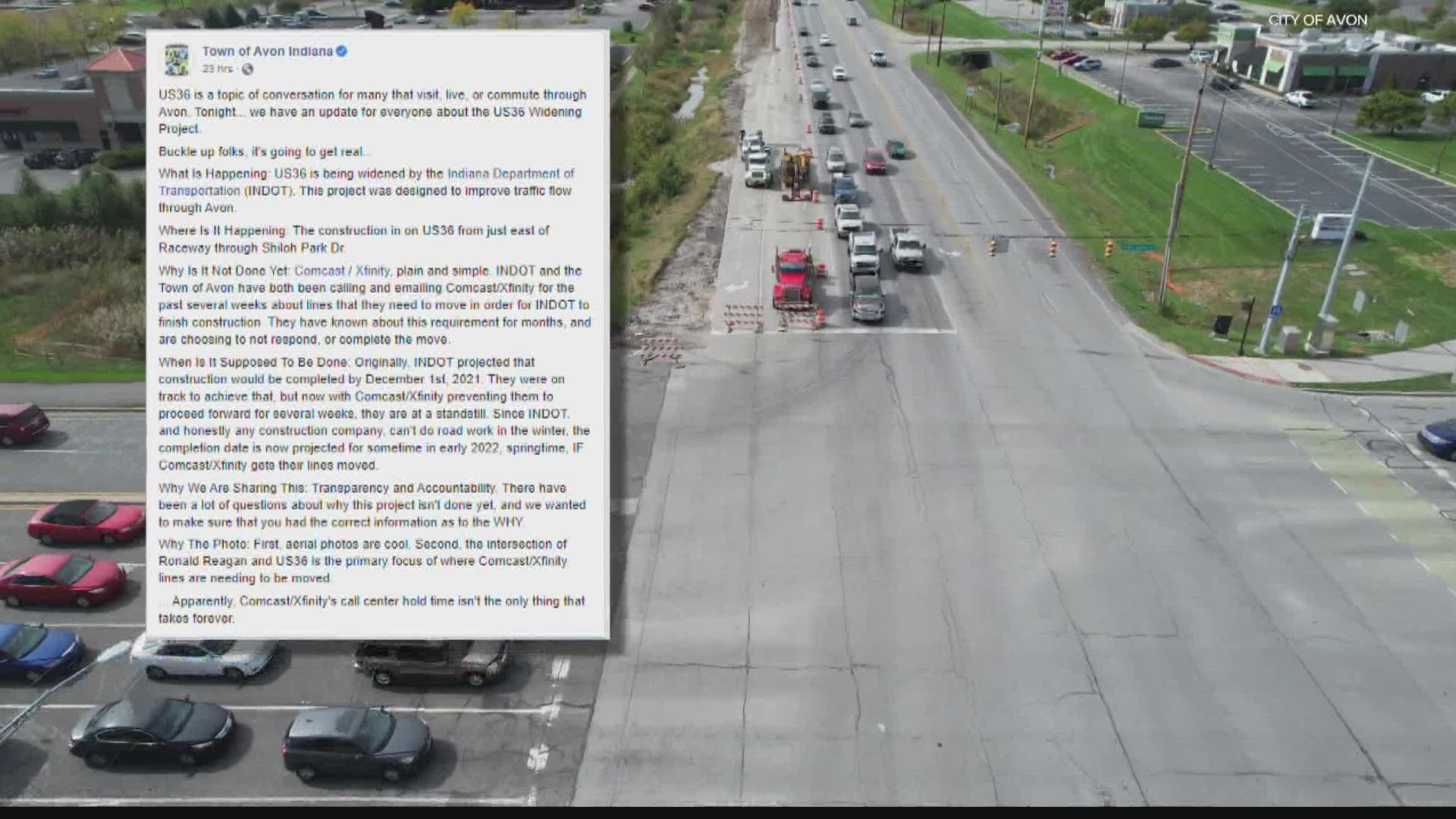 AVON, Ind. — Expect more delays on the main route going in and out of Avon. Construction on U.S. 36, which was supposed to be completed this December, will continue through next year. Now, city leaders are pointing fingers at who is to blame for the delay.

"Just someone communicating to us what's going on is all we're really looking for," said Avon Town Manager Ryan Cannon.

The town of Avon posted on social media Wednesday about why the construction is delayed on US 36.

"Half the project has moved on to another phase and while the other half is still sitting and waiting," Cannon said. "It ends up costing INDOT more money, which means it's costing taxpayers more money, but it’s also creating an inconvenience to drivers."

The construction began in April. INDOT is widening the stretch from just east of Raceway to Shiloh Park Drive, eventually taking the road from four lanes to six.

US36 is a topic of conversation for many that visit, live, or commute through Avon. Tonight... we have an update for...

Posted by Town of Avon Indiana on Wednesday, October 13, 2021

However, before construction can begin, Cannon said crews have to move some utility lines.

"Utility relocation should have been done by April, and we're sitting at September, and it's still not complete," Cannon said. "The frustrating part is, even if they were delayed, and they were making progress in doing it, we wouldn't be in the spot we are in today."

Cannon and INDOT said they had not heard from the utility company since finding out about the delays last month.

"Quite frankly, we've been disappointed that we haven't gotten a response, even to tell us when Comcast is going to get out of the way, which will then help us communicate to people when the project will be done," Cannon said.

"He reached out to our project manager. I think things will be rolling pretty soon with that," said Debbie Calder, communications director for INDOT.

While Comcast hasn't provided a new timeline, construction should get underway next spring after a break in work during the winter.

"We'll get this done, and I think everybody will like the end result," Calder said.

"Like every provider, utility and any other entity that may be using a trench on a major project like this, we have to wait our turn and follow the proper order of operations. We tried to get in the ground and the site wasn’t ready for us to begin work as other entities using the trench encountered multiple delays. We will continue to work with our partners at INDOT who are managing the project to ensure that our work is properly and safely completed."