Around 1,000 show up to 'March for Science' in Indianapolis

At least a thousand people showed up at the Indiana Statehouse late Saturday morning to take part in a local March for Science. 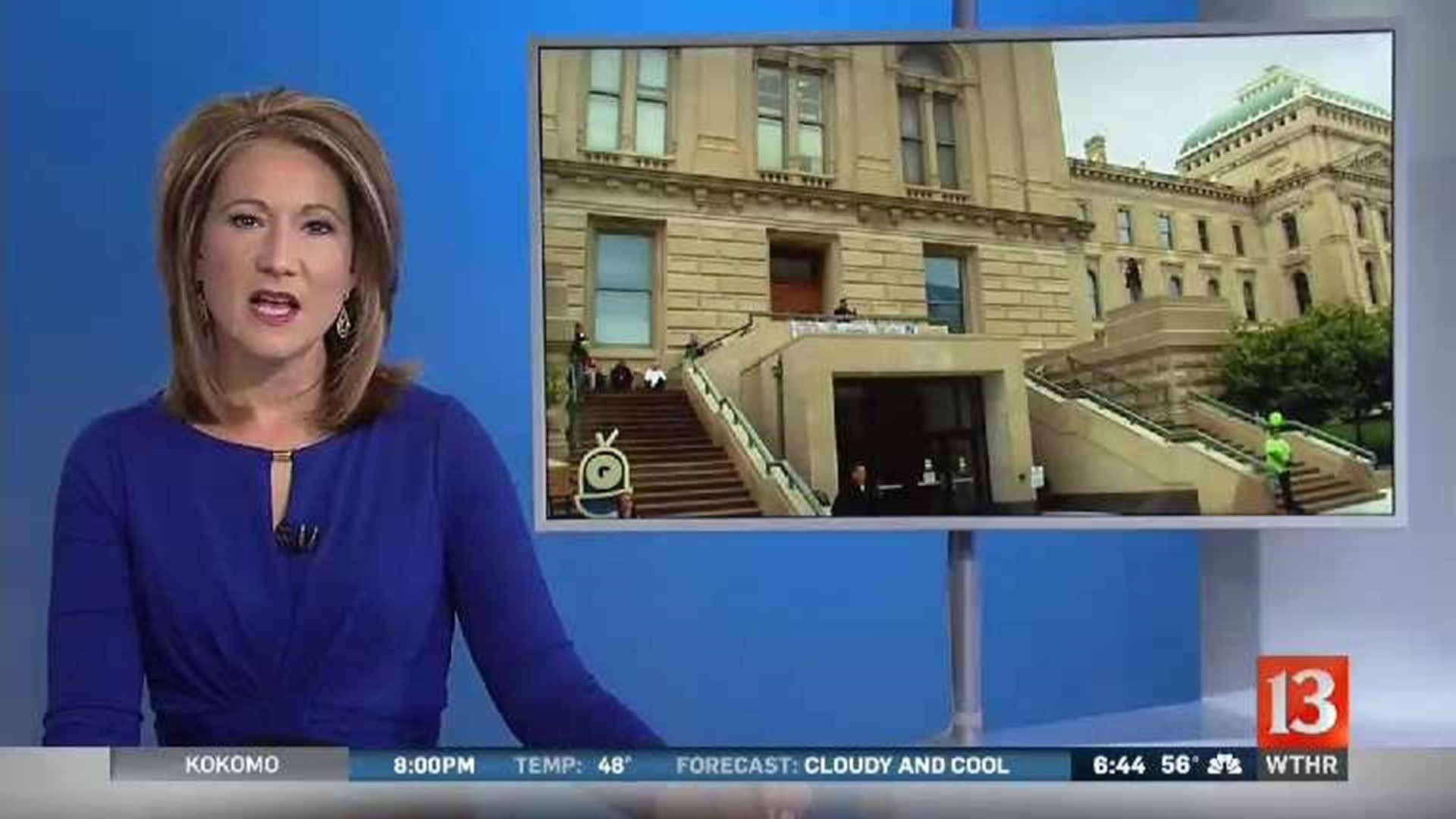 INDIANAPOLIS (WTHR) - People across the country and right here in central Indiana marched for science Saturday.

More than 1,000 showed up for the Indianapolis march. Some told us they wanted to stand up to the government and prove science is important when they've been told otherwise.

They said they're encouraged such a big crowd came out.

"It shows there are people out there who really care and that we can make a difference if we work together and that we're actually here and we're ready to do something," said Delaney Isaacs.

"I thought it was important to be here to show that's it not just scientists who care about the environment, that we don't make the Earth worse than it already is," added Uella Rodriguez.

WASHINGTON (AP) - The Latest on the March for Science, with events around the world intended to promote the understanding of science and defend science from attacks such as proposed U.S. government budget cuts (all times EDT):

Scientists, students and research advocates are marking Earth Day by conveying a global message about scientific freedom without political interference.

Those participating in science marches around the world are also arguing for adequate spending for future breakthroughs and the value of scientific pursuits.

President Donald Trump issued an Earth Day statement, saying that "rigorous science depends not on ideology, but on a spirit of honest inquiry and robust debate."

One of the organizers of the first Earth Day, Denis Hayes, says the crowd he saw on the National Mall in Washington appeared energized and "magical," almost like what he saw that first day 47 years ago.

Kathryn Oakes Hall pinned a sign to the back of her T-shirt as she made her way to the march in Santa Fe, New Mexico: "Nine months pregnant, so mad I'm here."

"I'd rather be sitting on the couch," she said.

But she marched anyway because she worried about her baby's future in a world that seems to consider science disposable. Her husband is an engineer at Los Alamos National Laboratory, she studied anthropology, she even has a dog named rocket.

So they joined thousands marching in Santa Fe, many of whom stopped her to remark on her pregnancy, with a mix of administration and concern.

She wore a white T-shirt, with a drawing of the earth stretched over her belly, and carried a sign that read "evidence-based policy and not policy-based evidence."

Ice photographer and filmmaker James Balog, who says he was watched trillions of tons of ice melt, told the Washington crowd that talking about the science of climate change in the face of the Trump administration and climate change deniers is "a battle between objective reality and ideological fiction."

Pennsylvania State University's Michael Mann got a loud cheer just for his sentence "I am a climate scientist."

Mann, who first created the hockey stick that showed a spike in recent global temperatures after thousands of years said, "there was no more noble pursuit than seeking to insure that policy is informed by the objective assessment of scientific evidence."

Software engineer Bill Wood of Rockville, Maryland, had a plastic protected sign that read "things are so bad even the introverts had to come out."

President Donald Trump says in an Earth Day statement that his administration is "committed to keeping our air and water clean, to preserving our forests, lakes and open spaces and to protecting endangered species."

But that won't be done, he says, in a way that harms "working families" and says the government is "reducing unnecessary burdens on American workers and American companies, while being mindful that our actions must also protect the environment."

His comments come as thousands of people around the world participate in science rallies.

Hundreds turned out in light rain for a pro-science rally on the Vermont statehouse lawn in Montpelier. One of the speakers, Rose Paul, director of conservation science for The Nature Conservancy of Vermont, told the crowd that "Science is not a partisan issue." She said "climate change is happening" and scientists are needed to help understand how shifting weather patterns are affecting the world.

Denis Hayes, who co-organized the first Earth Day 47 years ago, said the crowd he saw from the speaker's platform on the National Mall in Washington was energized in a rare way, similar to what he saw in the first Earth Day. That's unusual for an odd numbered anniversary, he said.

"This magical thing that sometimes happens, sometimes doesn't happen," Hayes said. "The reason that it happens is that you've got a clear enemy. For this kind of weather this is an amazing crowd. You're not out there today unless you really care."

There are cancer survivors and doctors with signs that say "science saves lives," she said, and estimated that 90 percent of the signs are not political.

"Science is not a partisan issue," she said. "Science is for everyone, and should be supported by everyone in our government."

Thousands of people stood outside the Washington Monument amid bouts of downpours, listening to a mix of speeches and music. Speakers noted that President Trump was in the White House nearby, having cancelled a weekend in New Jersey.

This was the first protest for Jeannette Villabon and her son Nikko Chey of Stanhope, New Jersey. So Villabon went all out, donning a Tyrannosaurus rex costume and holding a sign that said: "Hey tiny hands fund EPA study. Quit being cretaceous."

Trump's "archaic thinking is going to ruin us all," Villabon said.

Other signs were only slightly less pointed, such as "edit genes not the truth," ''data not dogma" and "global warming is real. Trump is the hoax."

More than a thousand people stretched for miles through the streets of Gainesville, Florida. It was a peaceful demonstration, said Pati Vitt, a plant scientist at the Chicago Botanic Garden in town for work at the university.

"We're scientists, so we're orderly," she said with a laugh. "We let the signs do the talking."

She said her favorite featured a drawing of DNA, with the note "checks itself before it wrecks itself."

And she hopes the crowds at hundreds of cities across the country draw attention to the perils of ignoring science funding.

Hundreds of people have braved pouring rain in Nashville, Tennessee, as they march through city streets and chant "science, not silence."

It's just one of the locations across the United States and the world on Saturday's March for Science events.

Marchers are waving signs that say "there is no planet B," ''make America think again" and "climate change is real, ask any polar bear."

Shah worries about his sons' futures if science spending is cut.

The March for Science has attracted several thousand people in Berlin, and those supporters of sciences have walked from one of the city's universities to the Brandenburg Gate.

Meike Weltin is a doctorate student at an environmental institute near Berlin. She says she's participating because - in her words - "I think that politics need to listen to sciences."

Germany's foreign minister, Sigmar Gabriel, has endorsed March for Science events across Germany. Gabriel says "free research and teaching are the supporting pillars of an open and modern society."

Thousands of people are expected to attend March for Science events around the world to promote the understanding of science and defend it from various attacks, including U.S. government budget cuts.

The March for Science was dreamed up at the Women's March on Washington, a day after President Donald Trump's inauguration in January.

The march puts scientists - who generally shy away from advocacy and whose work depends on objective experimentation - into a more public position.

Scientists involved in the march say they're anxious about political and public rejection of established science such as climate change and the safety of vaccines.