The hashtag #FireMeToo is also going viral on Facebook, as some local Catholics express unity in the midst of the controversy. 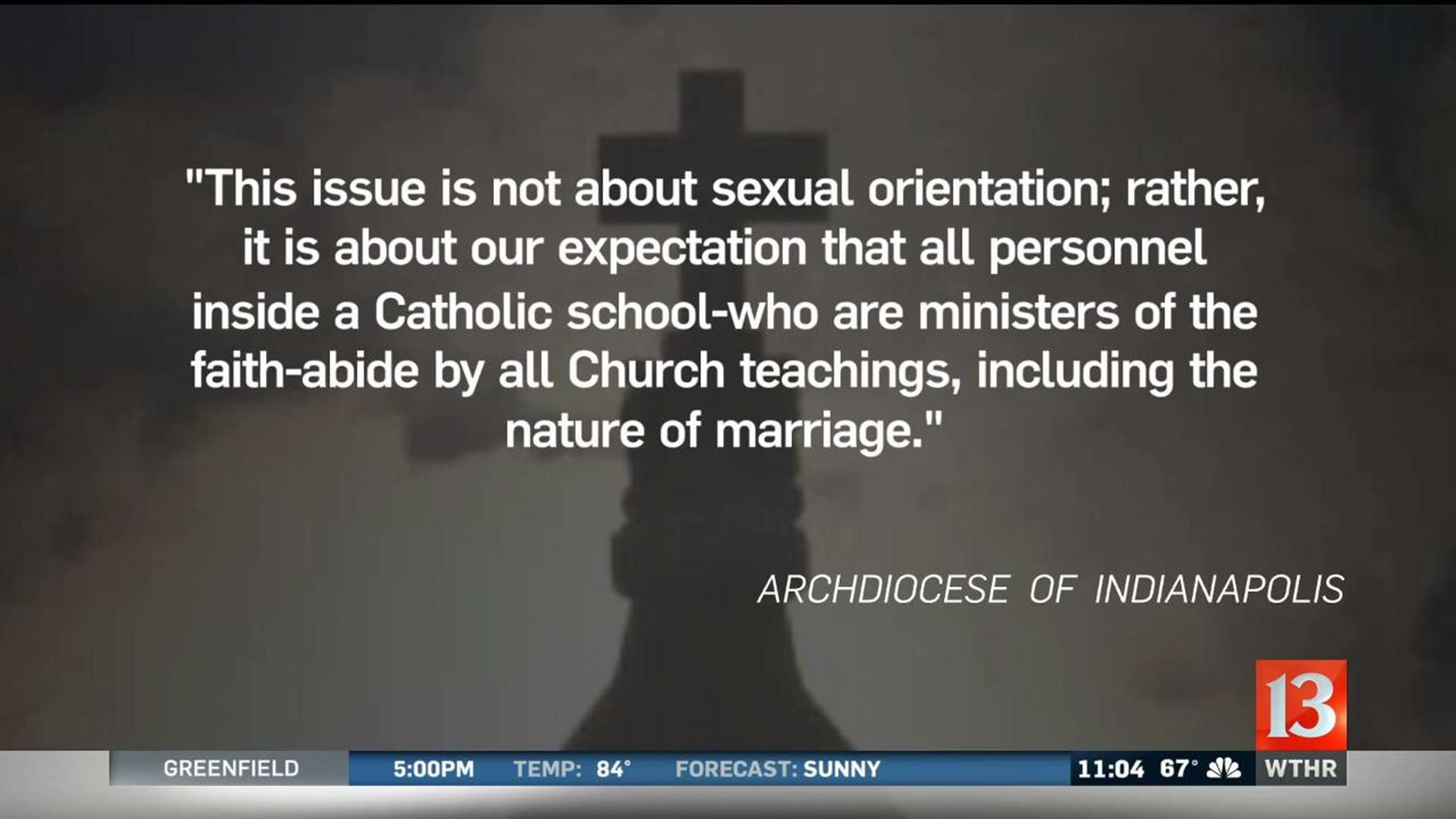 INDIANAPOLIS (WTHR) – Many Catholics across Indianapolis are expressing frustration with the Indianapolis Archdiocese and support for a Cathedral teacher who was fired because of his same-sex marriage.

The hashtag #FireMeToo is also going viral on Facebook, as some local Catholics express unity in the midst of the controversy.

After learning Cathedral fired a teacher over same-sex marriage, Brebeuf graduate Tim DeLaney says he was sickened and saddened for fellow Catholics who love their faith. He says it's divisive and discriminatory.

"Last night it was anger. Anger, disappointment," DeLaney said. "There has been universal outrage. I haven't heard anything other than outrage. It's like the Salem witch hunt. It really is and it's just terrifying."

"I felt it was a disgusting despicable thing that they'd [the Archdiocese] done and I felt my high school was better than that," Hayes said. "Now it's David vs. Goliath. I think we're at a point where a battle's about to start."

Cathedral said it fired the teacher after an ultimatum from the Archdiocese - backed into a corner that it would lose the ability to operate as a Catholic school, if it didn't let the teacher go.

But this action also appears to be in violation of the school's own non-discrimination policy.

Eyewitness News read the employee handbook at Cathedral, which lists "sexual orientation" as a protected class in the Equal Employment Opportunity section.

"This is an unprecedented move," Hayes said. "There is nowhere else in this country where an Archdiocese has meddled into the internal governing issues of a non-Archdiocesan school."

"Unless we make our voices heard, there won't be change on high," DeLaney said.

DeLaney did that by creating a Facebook page called "Fire Me Too."

He was inspired by a post from a Cathedral teacher that went viral Sunday night.

It says she divorced and remarried, without getting an annulment, which would technically violate her morality clause, so "as scary as this is to say, Archbishop Thompson: fire me too".

DeLaney says he's frustrated with Thompson, as well: "It's absolute outrage. We went from having now-Cardinal Tobin - one of the greatest Archbishops we could have had in our community and then for our new Archbishop to come in and make this, of all things, his singular focus? We went from standing up for the rights of refugees to rooting out teachers and firing them for who they love?"

Many people on social media are now expressing the need for unity, they're encouraging protest and some are talking financial pressure - asking how to take back donations.

"Certainly the archdiocese is unworthy of any financial support in this environment. You know, they come every year asking and I think this is the year where the Catholics should say no," DeLaney said. We may need them for salvation but they need us to keep the lights on."

Hayes went even further to show his frustration.

He gave back his high school diploma at Cathedral on Monday morning.

He graduated Cathedral in 1980. Says it’s always been a family. But he believes after the firing of an educator over same-sex marriage, the family feels broken.
Today - that Cathedral alum went back to the school and returned his diploma in protest. @WTHRcom pic.twitter.com/VhYxq8TT2j

"I walked right into the school and I laid it there and I said 'here's my diploma,'" Hayes said.

Hayes said he also talked to staff at Cathedral, all of whom were in tears.

"It aches for them. I ache for them," Hayes said, "because they know the corner they were backed into is wrong."

Educators, at odds with Catholic leadership, trying to figure out what's next.

Hayes says Cathedral always felt like a family and one teacher told him, as he handed in that diploma, the family is now broken.