Isaiah Mcintrye, 21, had no idea someone had snapped a photo of him when he helped a 93-year-old woman walk across the ice to get to the store in Millinocket. 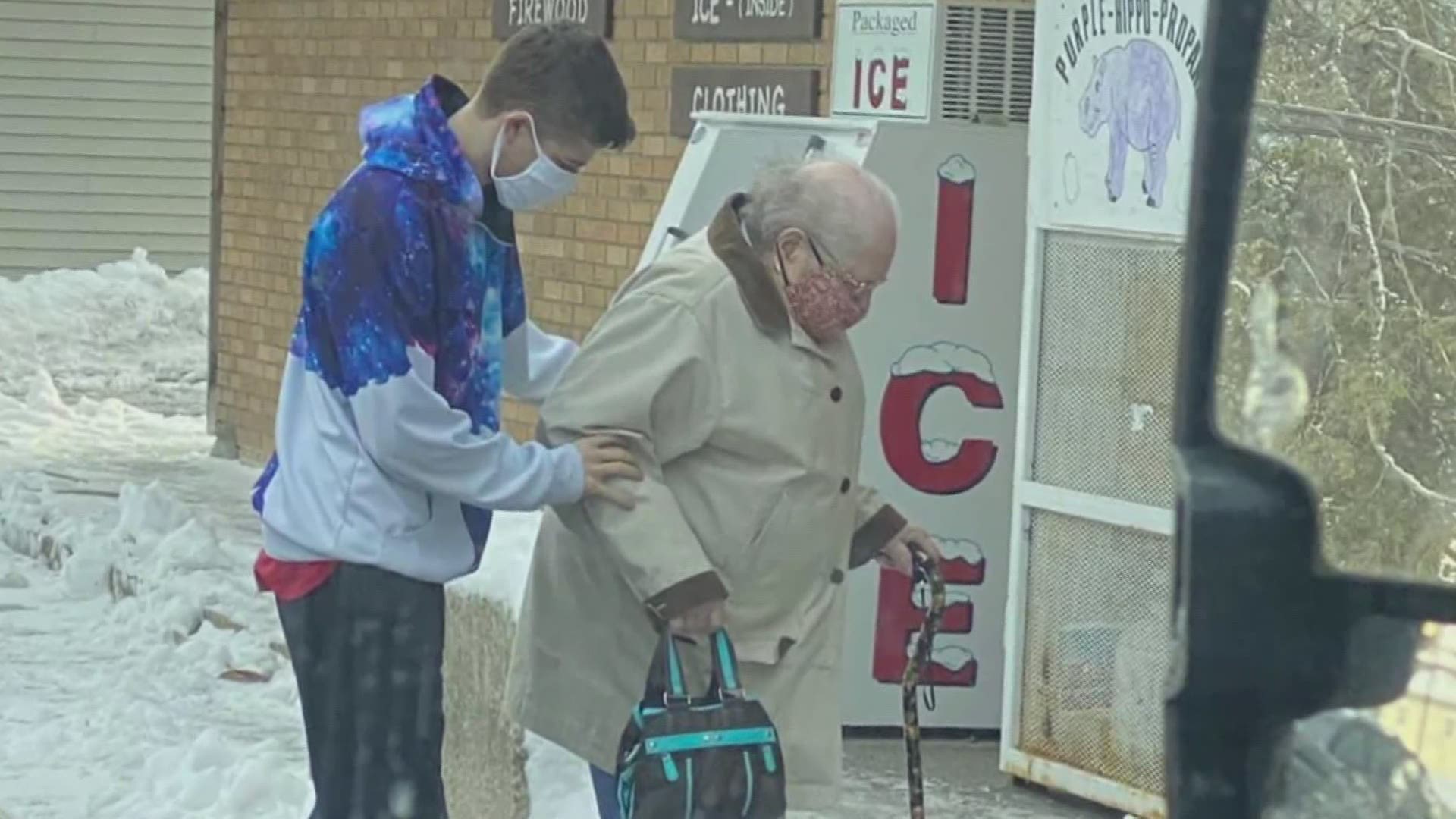 MILLINOCKET, Maine — Sometimes in life, especially among bleak times, it's the simple things that bring the most joy.

Twenty-one-year-old Isaiah Mcintrye had no idea anyone was watching when he helped an elderly woman cross some ice so she could get into Katahdin General Store in Millinocket on Tuesday, December 8.

He was in his car when he noticed the woman slipping and struggling on a patch of ice with her cane in one hand and her purse in another. So he got out of his car, threw on his mask, and asked her if she needed any help. He escorted her to the dry sidewalk, she thanked him and he went on his way not thinking it was a big deal.

Credit: Samantha Voisine
Isaiah Mcintrye, 21, helps stranger Marjorie Moore, 93, cross over some ice to get to Katahdin General Store to do some Christmas shopping on Tuesday, December 8, 2020.

But unbeknownst to him and the woman he was helping, their short interaction that only lasted a few moments was captured on camera by a passerby and like so many things ended up on Facebook by the woman who snapped the photo.

It didn't take long for Facebook users to identify the good samaritan and the woman in the photo as 93-year-old Marjorie Moore.

Moore said after the picture was uploaded her sons and daughter saw it and questioned why she had gone out in the first place but she assured them it was not an icy day and there was only a little ice on the sidewalk that she could not maneuver. She was ready to return home when Mcintrye came to her rescue.

"He was just a young fellow...I thanked him and told him he was a very nice gentleman," recalls Moore.

Moore turns 94 in January and still lives alone in an apartment at an assisted living community. She still drives but says she does not anywhere far, just to the store and around town. Last Tuesday she was at Katahdin General to do some Christmas shopping. She says alot of people know her in town because when she turned 90, she made waves when she went skydiving for the first time.

Credit: contributed
Marjorie Moore went skydiving when she turned 90 in 2016.

Since the picture was posted it has been shared more than 2,600 times in Maine and as far as Italy with messages and comments of support and gratitude. Mcintrye says he was raised to be helpful.

"It's not every day that you see people react positively towards other people," says Mcintrye who has been surprised by all the compliments.