Around 100 teachers and union workers converged on a downtown Indianapolis hotel Wednesday, protesting the convention of a controversial group. 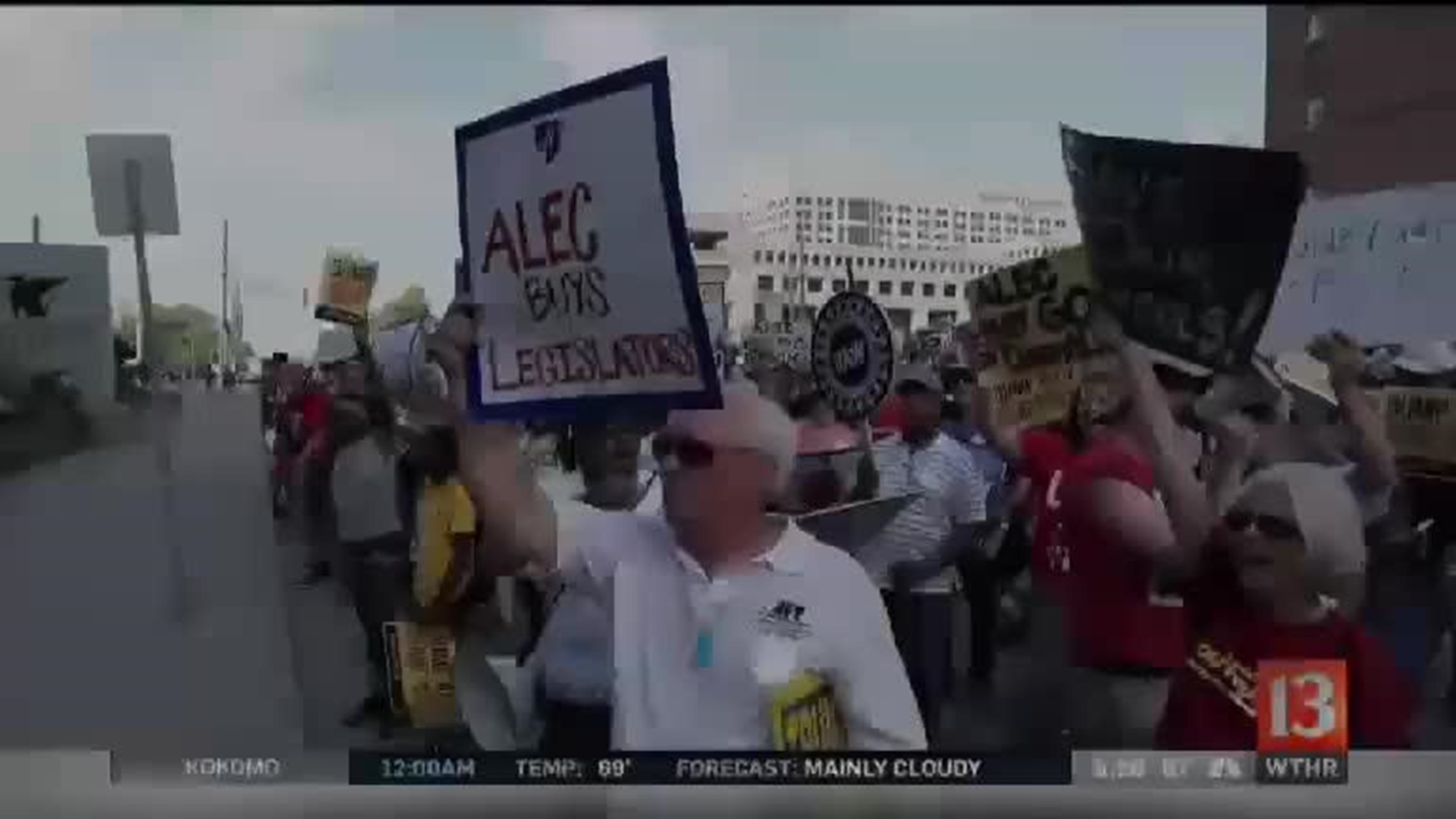 Around 100 teachers and union workers converged on a downtown Indianapolis hotel Wednesday, protesting the convention of a controversial group.

ALEC, the American Legislative Exchange Council, is made up of lawmakers, mostly conservative Republicans.

Each year the group proposes potential legislation alongside major corporations. Protestors claim it amounts to lobbying, but ALEC gets tax-exempt status and doesn't follow lobbyist rules.

13 Investigates got a tip about one of the group's events and shows us why it caught the attention of the Department of Defense.

A raucous group of Indiana teachers and union workers greet members of the American Legislative Exchange Council before marching around the J.W. Marriott in downtown Indianapolis.

ALEC bills itself as the largest organization of state legislators, gathering to discuss business and economics.

But in state after state, the group's presence draws shouts and jeers. Protestors showed up back in May in Pittsburg and at last year's annual convention in San Diego.

Critics say ALEC is a partisan group of legislators making back room deals with powerful corporations. They also allege the laws pushed boost company profits and in return result in campaign donations for re-election for the lawmakers who participate.

"I think everyone should be very weary and very leery, watching carefully to see where ALEC gets its resources and how it connects those resources to legislators," said Teresa Meredith, President of the Indiana State Teachers Association.

"Nothing could be farther from the truth. I reject the notion that there's anything untoward going on. The reality is what we do here is engage in model discussions," he told 13 Investigates.

13 Investigates has discovered ALEC is under scrutiny by the Department of Defense over an event at Camp Atterbury on Saturday.

In an email obtained by 13 Investigates, organizers react to a directive from Defense Headquarters taking issue with ALEC being linked to the military installation. At one point, "the event was on hold with (the) possibility of cancelation unless organizers could show it had "removed all references to ALEC."

Under army rules, the Department of Defense "does not engage in activities that could be interpreted as an association with any partisan political causes, issues or candidates" during an election year.

And military installations cannot be used for "political campaigns or election events," including speeches.

Burton declined our interview request, but in a statement said the Camp Atterbury tour and firing range event "is not hosted by, sponsored by or affiliated with ALEC." Burton says he "extended an invitation to ALEC attendees to participate."

A week ago, ALEC touted the Camp Atterbury Tour as part of it's Annual Meeting, telling tour attendees to contact an ALEC representative.

"I recognize and understand that. The reality of it is that it's not an ALEC event. It's a 3rd party event," said Meierling.

Gov. Pence will not attend that event, but will instead address the ALEC convention on Friday afternoon in Indianapolis.