Police runs to the Red Carpet Inn and Fanta Suites on Main Street have skyrocketed recently. 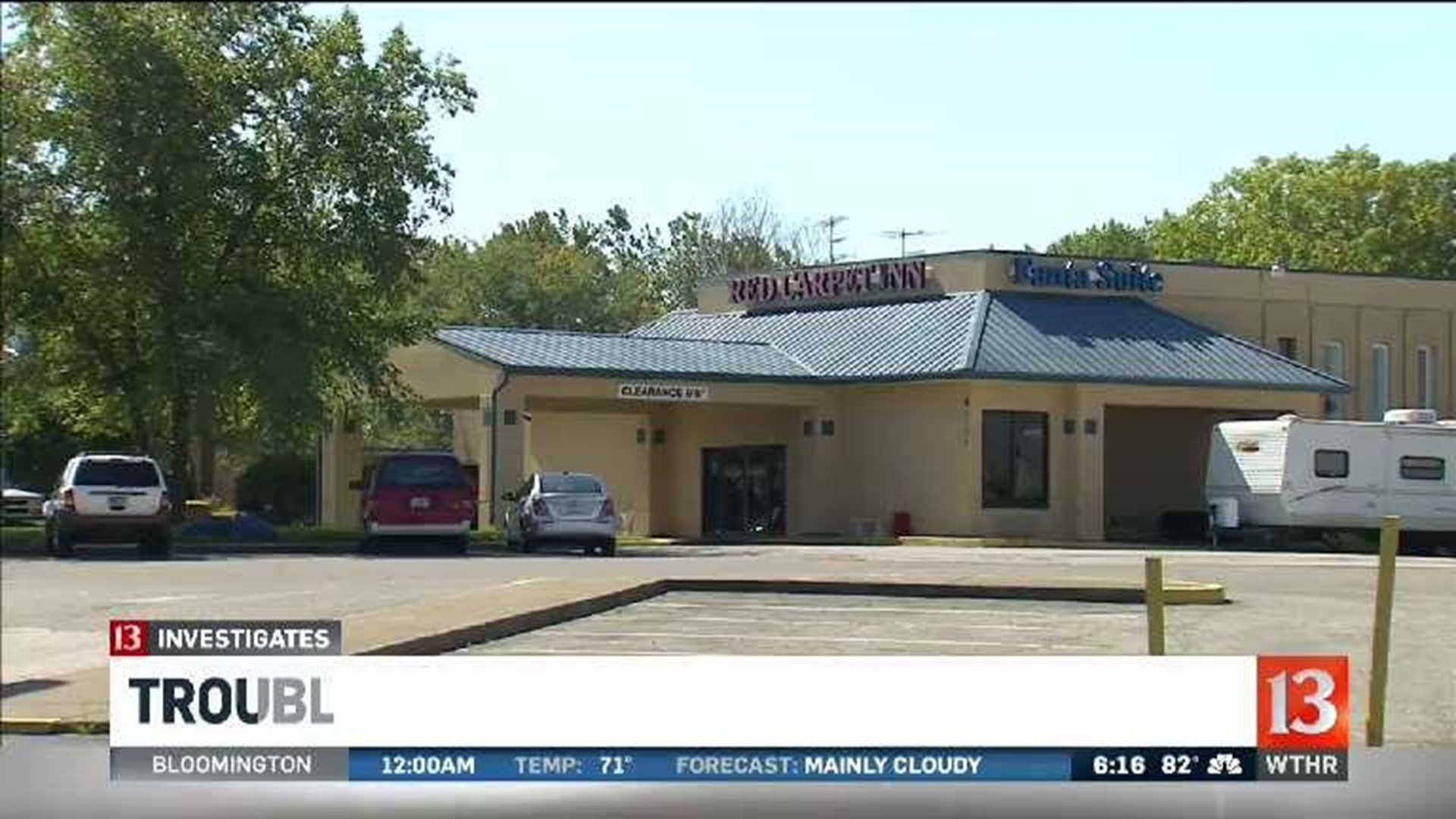 GREENWOOD, Ind. (WTHR) - There are safety concerns at a hotel in Greenwood, where 13 Investigates has discovered a troubling trend.

Police runs to the Red Carpet Inn and Fanta Suites on Main Street have skyrocketed recently.

That hotel has also had multiple visits from the Johnson County Health Department about sanitary conditions.

Police body cameras were rolling Monday, as officers responded to a report of indecent exposure outside the Red Carpet Inn & Fanta Suites in Greenwood.

A guest in a dirty robe, and not much else, was reportedly waving adult toys in the parking lot.

13 Investigates discovered the incident is part of a troubling trend in and around that specific hotel.

Officers are responding there a lot lately for incidents like a drug robbery last May where again, cameras were rolling.

"Greenwood Police Department! Hey! Show me your hands," the officer says, "Hands! Is there anyone else in the room with you?"

Later on the video, police are seen finding drug paraphernalia next to the bed.

"We got needles," one of the officers says.

13 Investigates looked at the numbers over the past decade at the Red Carpet Inn & Fanta Suites.

It's a hotel that's been in Greenwood for decades, with regular rooms but also themed fantasy rooms, like "Cupid's Corner", "Pink Cadillac", "Space Odyssey" and "Sherwood Forest".

Recently, police runs to this hotel have increased dramatically.

This year is on pace for even more. Police runs from January until late August are already at 128.

"I do know our run load, especially in reference to the Fanta Suites, is going up and that the clientele that we see there pretty much on a regular basis: prostitution, drug overdoses, a lot of drug usage, warrant arrests," said Greenwood Police Asst. Chief Matthew Fillenwarth.

13 Investigates also checked with the Greenwood Fire Department. Their statistics also show a spike in runs to the same hotel.

"We've had violent encounters where people were pistol-whipped. We've had people who were shot in that facility over bad drug deals," Fillenwarth explained. "This isn't doubling because people are locking their keys in their car!"

Data from the Johnson County Health Department shows in the past few years, they've investigated mold, cockroaches, bed bugs, infections from water in the spa tubs and needles and syringes in the rooms.

Last summer, the health department, fire department and police department conducted a joint raid to check conditions at the hotel.

"We organized that. We requested all of that in an effort to use every tool in the toolbox we could to try to make it better, to clean this up," Fillenwarth said. "There were several rooms that we could not go into because they were too flea-infested."

"I used to stay way over at the Red Roof. Not the Red Carpet. I just heard it's trashy. That's around through all of the truck drivers and stuff," Brown said.

"So, the place has a reputation is what you're saying," we asked him.

"Oh yeah. Oh yeah! I used to do construction work out here so I mean everybody knew about the Red Carpet," Brown said. "You see characters who go in and out of there."

13 Investigates asked a manager about the issues reported at the hotel.

"I just can't respond to anything. I just can't. I'm just not allowed to," she told us. She said the owner couldn't be reached.

Greenwood police say they just want fewer safety issues in a hotel that's right on Main Street at the gateway to Greenwood.

"It's right there at the front doorstep of Greenwood as you get off at exit 99," Fillenwarth said. "We'd love it if they turned it into a nice facility. The city would love to see that. We would like to see it be an asset to the city, not a liability."

Fillenwarth says the hotel did respond to city concerns about the exterior of the building, which now has fresh paint.

Also, a spokesperson for the health department says the manager has also made or attempted to make fixes when confronted with mold or bug issues.

After the raid last summer, for example, they said several of the sanitation concerns brought to the hotel's attention, were better during a visit a few months later.

But police say ultimately, the numbers of officer runs to that hotel are still too high.

"We respond here way more so than we do some of our other hotels," Fillenwarth said. "Again, we would love to see this an asset, not a liability."

This is one of the 144 calls Greenwood Police made to the Red Carpet Inn/Fanta Suites last year. They’ve been there 128 times this year. And not to stay in a theme room. #13Investigates safety & sanitary concerns at 6 on @WTHRcom pic.twitter.com/l5YE3lBlxa