11-year-old on a mission to feed the city's hungry

Austin King Hurt is just 11 years old, but he's already making a huge difference in his community, one plant at a time. 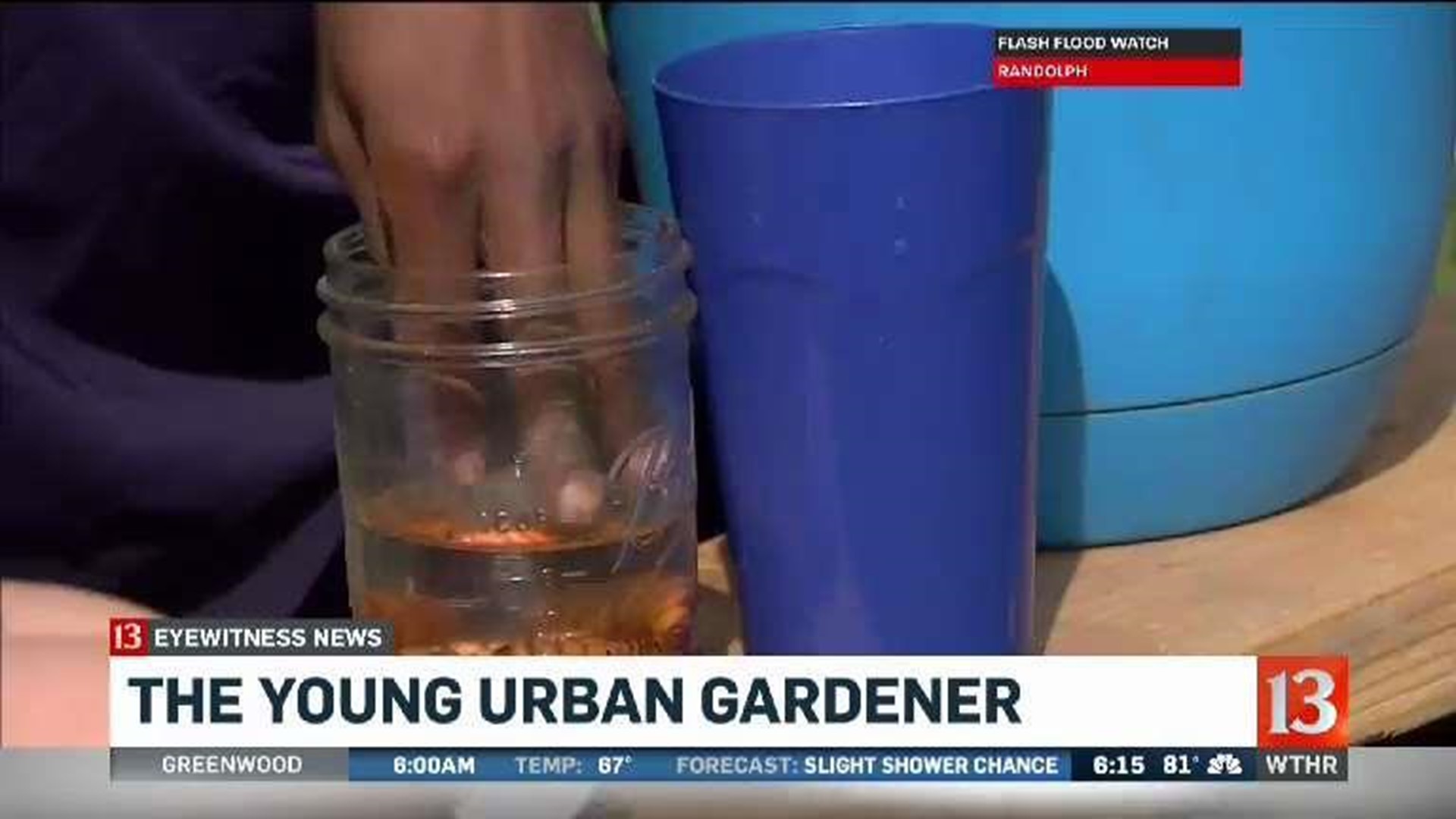 INDIANAPOLIS (WTHR) - During the day, he's a fifth grader at IPS School 15, trying to learn the science behind how roller coasters work.

Once the bell rings though, just down the street at the near east side home he shares with his mom and four siblings, the rigors of the school day disappear as an 11-year-old steps in front of his mother's cell phone camera and starts talking.

"Don't forget to introduce yourself," mom Dorothea tells him.

"Ok," he answers back before starting to talk to an audience he can't see, while standing in his backyard, a pot of soil in front of him, gardening gloves on his hands.

"Hello, everyone. I'm Austin King, the young urban gardener, and today I'm planting turmeric," he says as his mom continues to record.

"You do not bury it too deep," Austin says as he puts it in the pot of soil, remembering to look at the camera and smile.

"Turmeric has so many health benefits I can't name 'em all," he continues.

"I can only remember one and it thins blood," Austin tells his viewers, with authority in his voice.

This all started three years ago because Austin and his family were hungry.

"I took my mamma's beans out of the cabinet because we didn't have much to eat," Austin explains.

"All we had was rice and those bags of beans," he said. "It was like a very small bag of beans, not even enough to feed everybody, so I had to make enough," Austin says, his smile disappearing for a second, as he remembers the moment.

It's a defining one for this child, mature beyond his years because he's had to be.

In that moment three years ago, Austin says he made a decision his family wasn't going to be hungry anymore.

He explains how he took the beans, dug a hole next to his house and buried them in his yard.

"All I knew was water, dirt and sunshine. That's all I knew. I didn't know nothing else," says Austin.

That was enough. A week later, Austin says beans plants started coming out of the ground so he stuck pieces of wood in the dirt so they could grow taller.

"We had beans and rice for the rest of the winter," he says, smiling.

"I haven't bought a bag of beans since," said Dorothea.

Three years later, a bag of beans has grown into an entire garden.

"Right here is my pepper garden. I like jalapeno peppers," Austin said, pointing to a patch of ground. "Right here, I have raspberry. Right here, I'm making a raised garden bed for some carrots."

He's proud to give a tour around his home of all he's been able to plant and grow.

"This is my herb garden," declares Austin, proudly smiling as he then recalls what it's like to go to bed hungry.

"It's hard to do anything or think anything for me," said Austin, his smiling disappearing, remembering how his stomach used to turn at night because there wasn't enough food in it.

That's not the case anymore for Austin or his family. He's helping to feed them, but that's not where his work ends.

"I'm on my way. I'm on my way," Austin sings to himself as he leaves his yard and heads down the street, arriving at a lot right across from his school on Bellville Avenue. "That's the lot where they're digging."

Several people greet him warmly as he arrives.

"Glad you're here," another tells him.

"Have you got that list of what's going to be planted," someone else asks.

Austin pulls a piece of paper out of his pocket, reading from it as he rattles off a list of vegetables.

"Corn, carrots," he said. "For herbs, I've got sage, oregano, sweet basil, thyme, spearmint and lavender...fruits, I have blackberries, blueberries, grapes and raspberry."

The list is just some of what The Young Urban Gardener plans to grow in a lot that used be overgrown with weeds and littered with rocks.

When Austin discovered it a few months ago, he asked around the neighborhood and found out who owned it. That's when he knocked on Debbie Strietelmeier's door one day and asked if he could turn her empty lot into a community garden to feed the hungry.

"We said, 'Well, Austin, that would be great. You can certainly put your garden in our lot,'" Strietelmeier remembers of the young man standing on her doorstep.

The garden won't just be for Austin's family. He plans to feed people who are hungry with whatever is grown here.

"I see a lot of people without food so I wanted to start that and you 'aint gotta pay to grow anything on it," says Austin.

"I'll grow it. You'll pick it," he explains, saying if you're hungry, he wants people to come to the garden and take what they need.

"His name, Austin King, that's what I call him," says mom. "He's most definitely showing that he can feed a kingdom and I’m happy," she says of her son's work.

Austin is certainly getting some help with his mission. His neighbors in St. Clair Place are picking up their shovels alongside him and digging in too.

"I think this garden will give him a great, much more opportunity to show what he can do," says Strietelmeier. "So we're really excited about it."

"I can't wait to plant stuff here," Austin tells everyone as he picks up a shovel and goes to work. The harvest from this ground goes beyond fruits and vegetables.

With every conversation over a shovel full of dirt, relationships are starting to grow too, between people from all different backgrounds.

"He's brought a lot of people together to even just talk about the resources we have in this community," explains Debbie Strietelmeier.

All of them want to help The Young Urban Gardener feed the people who need it most.

"My first idea was I could stop world hunger from this," says Austin.

"It's huge," Austin says, nodding his head in agreement, explaining that he's not worried about how he'll do it.

This young man knows what can grow from just a seed.

"All this is my destiny and God told me this," says Austin.

"I was made to do this," he says with conviction, the certainty in his voice, never wavering.

Here's where you can email Austin for planting or gardening tips or to see how you can get involved. 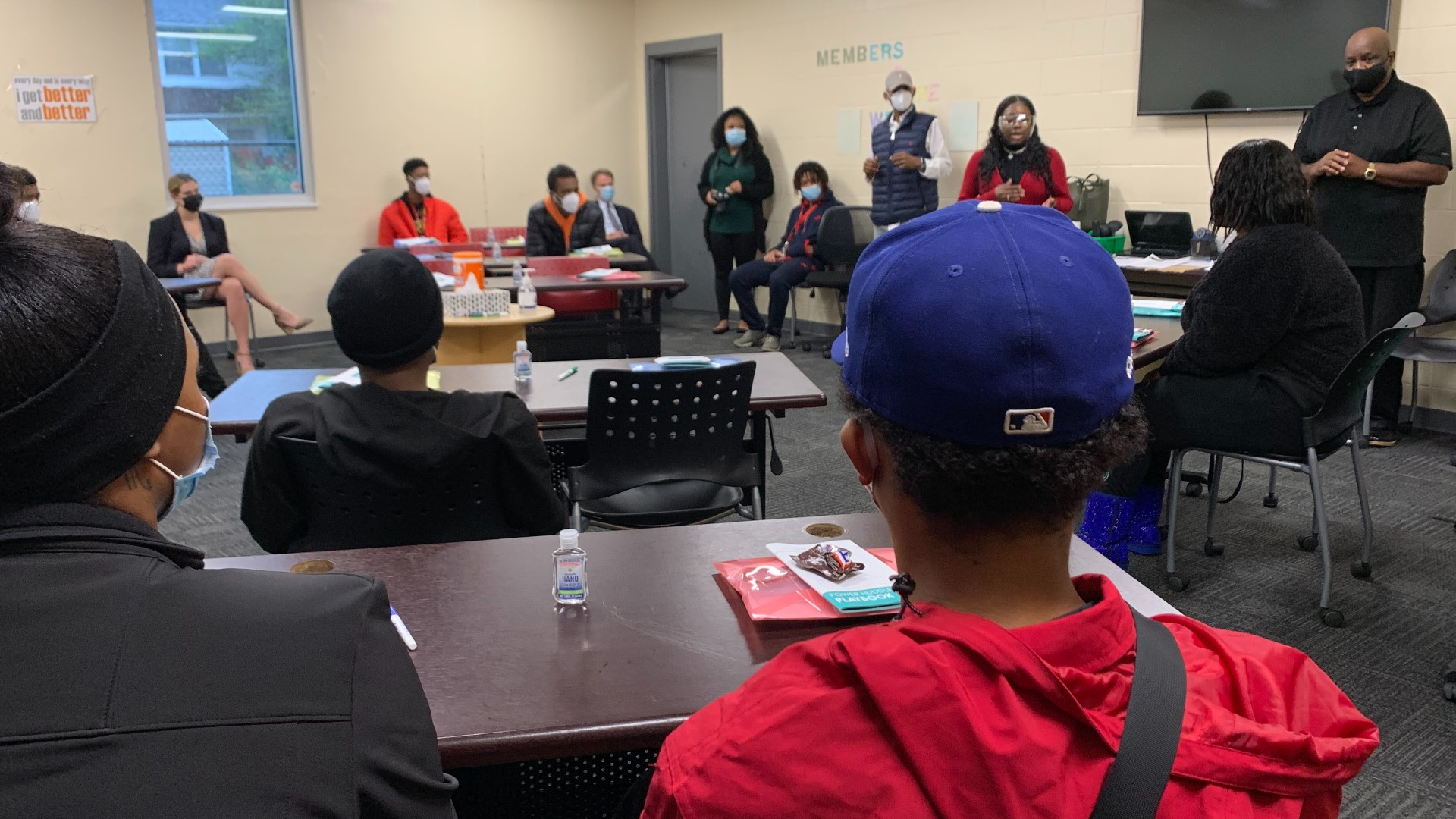 Indianapolis program to help unemployed young men not in school