Some of the animals were later found in a box truck parked outside the property. 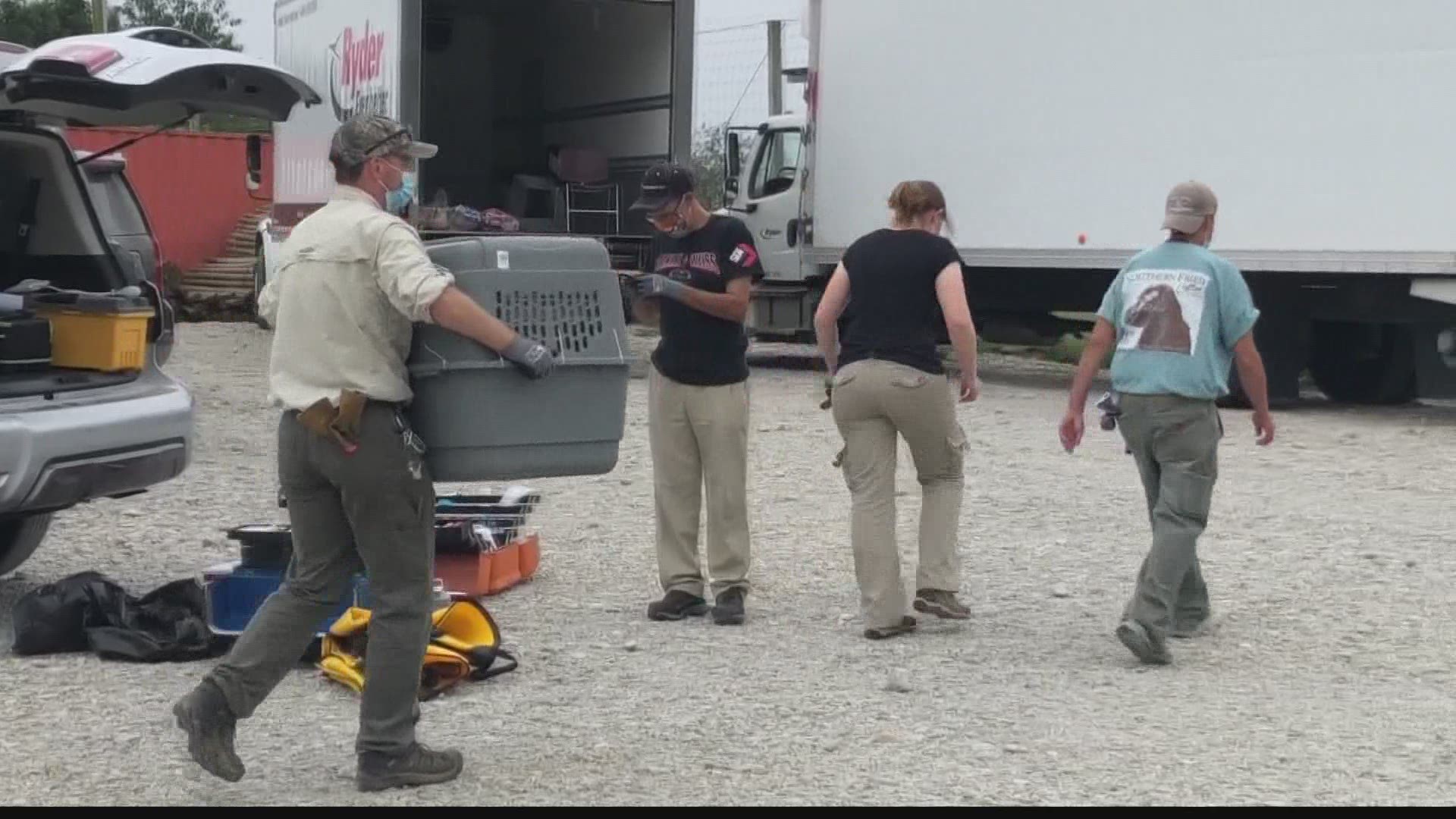 CHARLESTOWN, Ind. — Wildlife in Need owner Tim Stark is accused of removing more than two dozen animals from his property before officials could take them.

The Indiana attorney general filed an emergency motion saying several animals were taken from the exotic animal facility before the Indianapolis Zoo came to remove them. In total, the state said around $119,500 worth of animals were removed before officials arrived on the property Sept. 11.

Cougars, toucans, spider monkeys, a wolf and other animals were on Wildlife in Need's animal inventory when Stark submitted it on Sept. 7, however none were on the property when the zoo arrived Sept. 11.

Additionally, the zoo noted six animals were removed from the facility between their first and second day of animal removal. A sloth, two Debrazza monkeys and three booted macaques were later found in a box truck parked outside the property.

"...the missing sloth, Debrazza monkeys, and booted macaques as well as white face capuchins were found crated in the truck with no ventilation or water," the motion says. "The outside temperature was approximately 83 degrees."

The state asked for Stark to be held in custody until all animals are removed from Wildlife in Need, saying there is a "real concern" animals will continue to be taken unless he is unable to do so.

A judge gave Stark until 4 p.m. Tuesday to tell authorities the locations of all missing animals.

Stark is also accused of inciting violence towards to Indianapolis Zoological Society. In a Sept. 13 Facebook video, Stark told supporters to "stand your f***ing ground" and "throw rocks at them motherf***ers" while employees worked at the facility.

The state also said Stark refused to allow people on the property for nearly two hours on the first day of animal removals. When the judge required Stark to allow them in, he "screamed at the Judge at the end of the teleconference, 'F*** this!'"

When he left the property on Sept. 11, he told reporters "they just keep attacking me over, over and over."

"I made a mistake. I did get too many animals and they weren't being treated...they weren't fair," Stark told WHAS11. "They did need bigger enclosures, so when I come back from Oklahoma that was my goal. But instead, m**** like you want to portray me as a bad person."

During WHAS11's investigation into Wildlife in Need, Stark said "nobody" was going to take his animals, but on Friday, he said he would never put his animals in jeopardy or turn animals loose.

When asked what he would do after all animals are removed, Stark said he must go on with his life.

"I go on with my life, it’s that simple. They're never going to shut me down, they can try all they want," Stark said.

For more than 20 years, the self-proclaimed animal refuge has offered the public unmatched access to exotic animals in Southern Indiana, but the operation has also come with controversy — lawsuits, failed inspections and allegations of animal abuse.

RELATED: 'My animals are my life.' Removal of Wildlife in Need animals starts, owner Tim Stark admits he made mistakes

RELATED: Supporters say removal of animals from Wildlife in Need is wrong