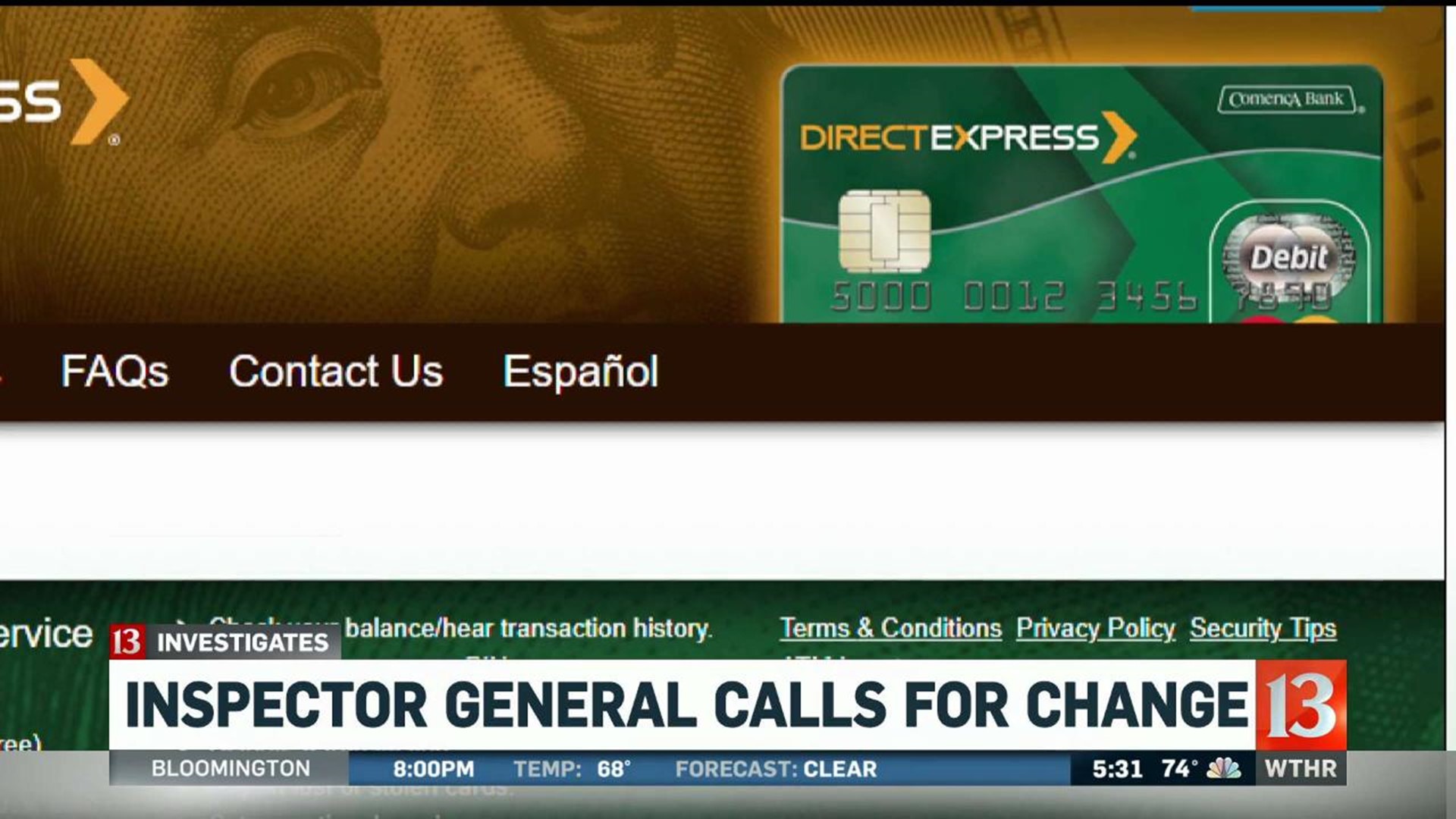 INDIANAPOLIS (WTHR) - A government watchdog agency says it was in the dark about half a million dollars stolen from retiree and disability accounts.

The money was snatched right out of Direct Express bank accounts without alerts to the U.S. Treasury. In fact, thieves siphoned cash from one Indiana veteran.​

13 Investigates has learned the company handling the payments for 4 million people will now face new oversight.​

The Office of the Inspector General is stepping in to track the fraud and to provide help to victims. ​

An investigation conducted by the Office of Senator Elizabeth Warren discovered 480 people had their money virtually disappear out of their government accounts last year. ​

Now 13 Investigates has learned the Inspector General of the U.S. Treasury didn't know about the widespread fraud because the company contracted to administer the Direct Express program failed to report it. A treasury memo shows there was confusion over reporting requirements. The Treasury Inspector General issued recommendations to change that. ​

13 Investigates first learned about thieves stealing retirement and disability benefits when an Indianapolis veteran came forward to say it happened to her.​

Jennifer Kreegar said one minute her monthly VA disability check was there, and the next, it was gone. ​

Someone had gotten into Kreegar's account and changed her address without her knowledge. Then, almost three weeks later, the thieves canceled her card and had a new one expedited to Georgia. She never got a single alert about the changes until the end of the month, and by then it was too late.​
​
By the time she discovered the fraud, all but $10 had been swiped.​
​
When she went to put in her social security number, she discovered her information no longer matched the records Direct Express had in its system. She was, in effect, locked out of her own account. She recalls the panic that flushed over her.​
​
"You're trying frantically to get through on the line, but you can't talk to a person," she told 13 Investigates.​
​
The Inspector General of the Treasury said victims like Kreegar weren't the only ones caught off guard and unaware of what to do.​
​
In a memo to the Commissioner of the U.S. Bureau of Fiscal Services, the Audit Director, Katherine Johnson, said the Office of the Inspector General of the Treasury was supposed to be alerted within one week of "any instance of a possible violation of federal criminal laws." And that alert should have come related to the fraud in the Direct Express Program.​
​
But Fiscal Services said due to the Right to Financial Privacy Act (RFPA), Comerica, the bank with the Direct Express contract, only reported "insider crimes" of fraud, bribery or embezzlement by its employees or subcontractors.​
​
The OIG said that interpretation is inaccurate and that the limited information Comerica provided about fraud in the Direct Express program was not enough to launch an audit or investigation. That is why the Inspector General's Office said it was unaware of the extent of the fraud involving nearly 500 victims nationwide, including Kreegar.​
​
Fiscal Services maintained that Comerica would need a subpoena or signed authorization to release more-detailed information about the fraud cases reported.​​

In order to close the reporting gap, the Inspector General recommended Comerica Bank provide a means of authorization for Direct Express cardholders.

It means victims will get to choose to have their fraud cases investigated by the Inspector General's office and tracked for three months to ensure the cases are resolved appropriately. It will also give the Treasury better oversight of the entire benefits program.​