Vapors from known carcinogens detected after environmental testing in Franklin

A team of environmentalists from the Edison Wetlands Association confirms to 13 Investigates high levels of Tetrachloroethylene (PCE), Trichloroethylene (TCE) and Radon were detected in homes near the old Amphenol Corporation and Franklin Power Products site. 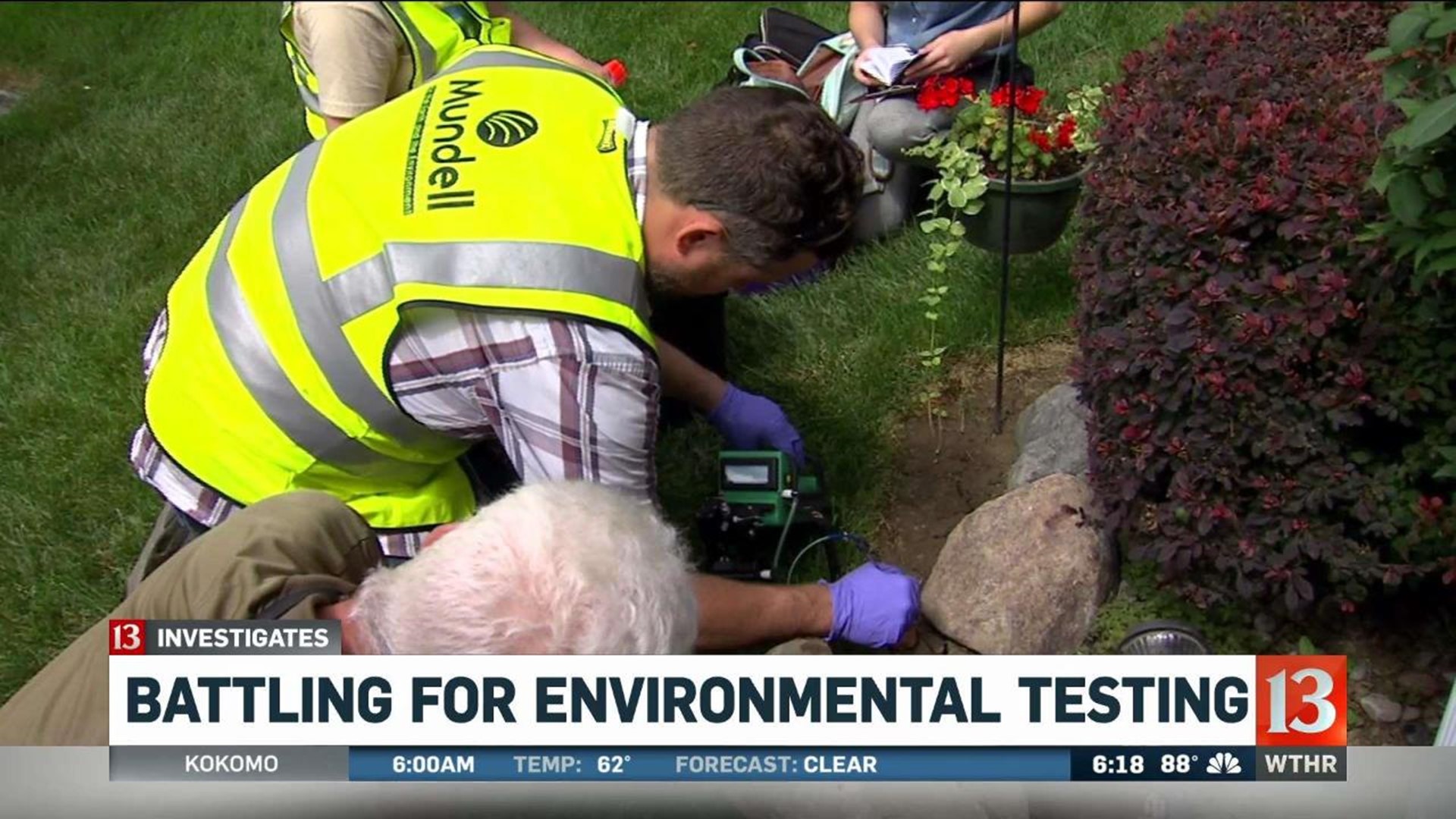 JOHNSON COUNTY, Ind. (WTHR) — The results are in for 14 Johnson County families who agreed to vapor and soil testing in and around their homes, three weeks ago.

A team of environmentalists from the Edison Wetlands Association confirms to 13 Investigates high levels of Tetrachloroethylene (PCE), Trichloroethylene (TCE) and Radon were detected in homes near the old Amphenol Corporation and Franklin Power Products site. In addition, testing revealed high levels of contaminants seeping into the air.

In 2015, 13 Investigates first uncovered a plume of contamination migrating from that site to the Webb Well Field. Three wells were shut down due to high levels of contamination.

Vapor and soil testing were performed in June 2018 in Johnson County, Ind.

According to test performed by Mundell & Associates, volatile organic compounds like PCE and TCE were detected in six of 14 homes. Three of those homes were downstream from the Amphenol/Franklin Power Products site and exceeded the residential indoor screening level set by the Indiana Department of Environmental Management (IDEM.) Six of 14 homes also had Radon detections exceeding the State’s Residential Indoor Screening level.

"It’s very clear that there’s a problem. For years the Johnson County community has been told that everything was alright, and that their children with cancer were not specifically significant, but our data shows that this is not the case and that these environmental issues must be properly addressed," said Shannon Lisa, Project Director for Edison Wetlands Association (EWA). She told WTHR additional testing revealed vapors from the same known carcinogens venting into the air from the treatment systems at the old Amphenol site.

“As much as you don't want positive results... it's almost validation”

“They’re supposed to make conditions on these sites better not worse,” the director added. "We found that the remediation system located at the former Amphenol site which is supposed to pump the contaminated groundwater underneath the site and treat it, appears to have no filter on the vent stack and is likely venting these chemicals into the air," she said.

All 14 families have been notified of their specific results and provided some guidance. EWA said what was surprising about the results is that high levels of vapor intrusion weren't showing up in basements and crawl spaces, but in living areas and even in a family’s kitchen.

It’s disturbing news for mothers like Kari Rhinehart and Stacie Davidson, who brought their concerns to 13 Investigates in 2015 after Davidson’s son Zane was diagnosed with Leukemia.

Our series: "Desperate for Answers" discovered the Franklin connection after finding more than half of the 30 children diagnosed with cancer in Johnson County lived or had spent significant time in Franklin near the Webb Wellfield and the old Amphenol/Franklin Power Products site. That included Rhinehart and her daughter Emma Grace Finely who died from Glioblastoma in December 2014. Emma Grace was just 13 years old. Monday would have been her 17th birthday.

EWA spent $20,000 testing in Franklin after hearing about the high pediatric cancer rates in Johnson County.

“Our kids should not be testers over whether something is a pollutant or not,” added Davidson, who along with Rhinehart started a group called "If It Was Your Child." The mothers have been working with groups around the country trying to raise awareness about the plight of children in Franklin and Johnson County.

"As much as you don't want positive results... it's almost validation," said Davidson, reflecting on the data.

Davidson said the numbers of sick children are not leveling off. According to data from "If It Was Your Child," 50 children have been diagnosed with cancer since 2008, and 23 of them live or had ties to Franklin. Despite the confirmations Davidson said she’s still bothered by one thing: “We can’t clean it up tomorrow. We know that there are still going to be diagnosis,” she said with a sigh.

Edison Wetlands told 13 Investigates the environment must be addressed. The New Jersey not-for-profit is now pushing state and federal regulators to step up and conduct widespread testing.

Davidson and Rhinehart met with Franklin Mayor Steve Barnett on Friday to talk about the results of the test. Monday afternoon, Mayor Barnett’s office put out a statement that said the mayor would be meeting with he Indiana Department of Environmental Management, and the Indiana State Department of Health this week to discuss the testing results. IDEM did not provide a reaction to the findings. A spokesman told 13 Investigates the agency had yet to receive the official results.

“The report from IDEM and ISDH will be vital in determining what can and will be done to protect our citizens,” said the mayor. The statement goes on to say that city officials reached out to U.S. Congressmen Todd Young and Trey Hollingsworth, asking them to write a joint letter to the EPA “requesting them to further their scope of testing in Franklin.”

EWA is also asking the EPA to help out with testing and has an online petition at change.org. So far more than 25,000 people have signed that petition.

"I really just wanted us to be wrong. I wanted to be wrong. I don't take any pride in having to make people worry," she said after learning about the test results.

While neither mother says the test results can definitively prove the contamination discovered in Franklin made their children sick, they both agree the testing is critical to cleaning up the toxic sites and removing the possibility, especially since the testing uncovered contamination seeping into the ambient air.

"We found that the remediation system located at the former Amphenol site which is supposed to pump the contaminated groundwater underneath the site and treat it, appears to have no filter on the vent stack and is likely venting these chemicals into the air," added Shannon Lisa.

Meanwhile the team from EWA is planning to make a return trip from New Jersey to Franklin within 30 days to start a new round of testing. The goal is get data from more homes near the contaminated sites.

“It’s a travesty that these families may have been chemically assaulted in their own homes,” the EWA director concluded.

Thursday afternoon, the Environmental Protection Agency confirmed to 13 Investigates it is concerned about test results in Franklin showing dangerous vapor intrusion. The agency says it is working with Amphenol Corp to conduct additional testing.