Chris Music said he has reported the smell of leaking natural gas to Citizens Energy at least three times in the past five years. 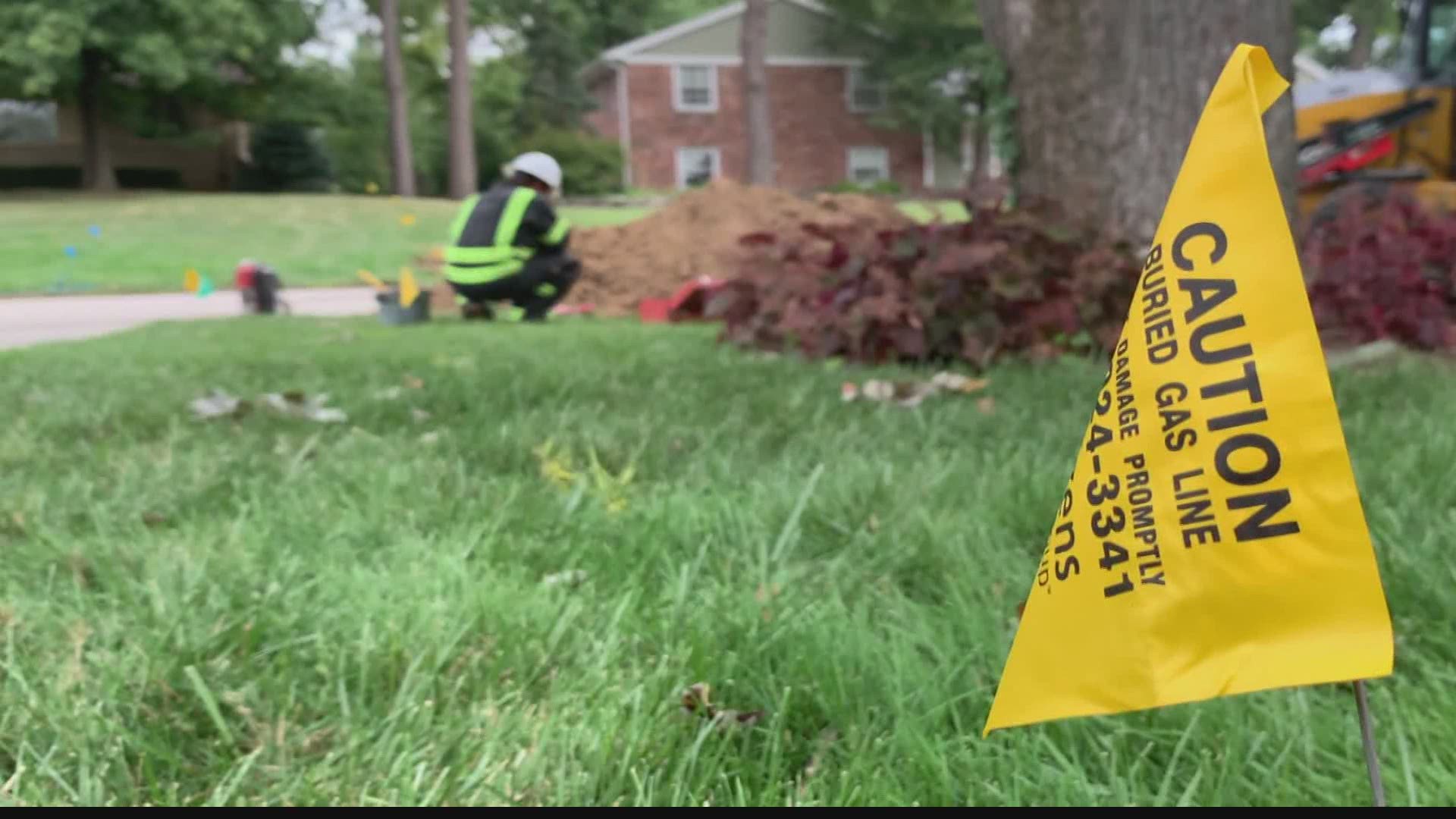 INDIANAPOLIS — As a convoy of trucks, backhoes and work crews pulled into a northeast side neighborhood Wednesday afternoon, residents along Green Leaves Road reacted with a combination of relief and frustration.

“Why does it take the media to get them motivated to do what they told us they’d do?” asked Chris Music, watching workers dig a hole in his front yard. “I feel like they just blow off the regular customer.”

Citizens Energy sent the onslaught of heavy equipment and manpower just a few hours after 13News contacted the company to inquire about an ongoing underground gas leak. The utility provider had known about the leak – in the middle of a heavily-populated residential neighborhood – since March and pledged then to fix it quickly.

But puzzled residents said the repairs were never made, resulting in safety fears as the pungent odor of natural gas wafting through the neighborhood for months.

“Smell it every day”

Chris Music had suspected something was wrong for a long time. He could smell it from his driveway.

“I can totally smell it right now,” he said earlier this week, taking in a deep breath through his nose. “I smell it everyday if I come out into the street. It’s that odor of rotten eggs that’s pretty hard to miss.”

(Natural gas actually is odorless, but utility companies add a substance called mercaptan to the gas to give it a distinctive odor that can alert you of a leak.)

Other people in the Devonshire subdivision neighborhood have noticed the odor, too.

“I do smell it and does smell like gas,” said Kathy Koczenasz, who passed Music’s home during her morning walk.

“Yeah, I smell it right now. Absolutely,” agreed neighbor Dean Phillips as he and his wife walked by a few minutes later.

Across the street, Jason Serban has noticed the odor when he strolls the neighborhood with his family.

“We've smelled it on and off for the last couple years,” he told 13News. “Yeah, I just smelled it right now.”

Music said he has reported the smell of leaking natural gas to Citizens Energy at least three times in the past five years. The most recent call was in mid-March after a passing neighbor knocked on his door to complain of the strong gas smell in front of his home.

“The last time I did call them out they were very quick responding to get out here,” he said. “They had a convoy of heavy equipment and they were out here for quite a while.”

At that time, Citizens Energy work crews drilled a tiny hole in the road in front of Music’s home. They placed a probe in that hole to help confirm natural gas was leaking under the street.

Credit: WTHR
Chris Music shows where utility crews drilled a small hole in the street to locate the underground gas leak this spring.

“I thought maybe they were going to dig up the main line, but then they all left. Said they'd be back in two weeks -- and that's been approximately 5 months ago,” Music said, shrugging his shoulders. “Never came back.”

The smell did not go away and neither did the leak.

With the help of a combustible gas detector, 13 Investigates confirmed Wednesday morning that natural gas was still escaping from the hole that Citizens Energy workers drilled in the roadway in March.

The hand-held device emits a slow clicking noise when it does not detect methane (natural gas). Used to pinpoint the source of a leak, the detector’s audio signal gets faster and louder as it gets closer to natural gas. When placed near the small hole in the street near Music’s house, the combustible gas detector screeched with a steady, high-pitched wail – a clear signal that methane gas is present.

Families living nearby said the leak made them feel anxious.

“There is a safety concern with it,” Serban said. “I remember the big explosion up on 96th Street. They said the gas came in along the underground pipes into the homes and that's what caused the explosions.”

Those explosions in the Charter Point subdivision took place in 1997 after a backhoe punctured an underground natural gas line. The incident killed an elderly resident, destroyed several homes and damaged at least 50 others over a two block radius.

That's why Music believes an ongoing underground leak – still active months (if not years) after it was first reported – is simply not acceptable.

Citizens Energy’s own website states if a ruptured outdoor gas line is detected, those aware of the problem should contact the company right away and "leave the area of the gas leak immediately, as well as areas where the odor of gas is noticeable."

“It's very troubling that they haven't addressed the problem,” he said earlier in the week after sharing his concerns with 13News. “They say they want you to call them and I’ve done that several times.”

About a dozen workers and at least ten Citizens Energy trucks, some carrying backhoes and other heavy equipment, descended upon Green Leaves Road by early afternoon to further investigate the leak. As work crews got busy, Citizens Energy’s communications staff was relaying updates to 13 Investigates. The first information from Citizens Energy communications coordinator Laura O’Brien came at 1:08 pm, and it painted a very different picture than the story shared by neighbors:

Here’s what I know so far: The customer at 6348 Green Leaves Drive called in to Citizens dispatch on the afternoon of March 18. We immediately sent a service tech to the location, and they located a leak in the street. We then sent a maintenance crew, who repaired both the leak in the street (which they had to dig up) and a leak that was located at the riser at 6347 Green Leaves Drive. That completed the natural gas repairs. When the crew said they would ‘return in a couple of weeks to fix it,’ it’s likely they were referring to the pavement that was disrupted during leak repairs. As of right now, we don’t have any other pending gas leaks in the area. However, we do have a technician en route to do a leak survey of the street and see if they can locate any issues.

Credit: WTHR
Chris Music watches as a utility crew digs a trench in his front yard to access a corroded underground gas line.

It was soon obvious the utility company did locate issues as work crews began digging a hole in Music’s front yard. Another update arrived from O’Brien at 1:38 pm:

Just wanted to follow up really quickly. Upon taking another look at the previous order, we determined that the previous leak was not IN the street. We did repair a leak ON that street on the afternoon of the 18th, though.

Then things got much busier. Utility workers started digging a second hole across the street and moving equipment into a neighbor’s yard. Technicians suited up in protective gear and entered the holes, then began laying new gas line under the street.

About four hours later, O’Brien sent a another statement at 5:29 pm, correcting what was identified as incorrect information she had been provided earlier in the afternoon:

Credit: WTHR
Corrosion on this underground gas line resulted in a gas leak that nearby residents smelled on a daily basis.

So initial reports that the underground leak had been fully repaired back in March, that the road was dug up in the process and that work crews were simply returning two weeks later to repair the street were all false due to an internal miscommunication. The leak under the road, caused by a corroded gas line that was more than five decades old, had not been fixed at all – just as residents had suspected.

Citizens Energy also told 13News that during their Wednesday afternoon inspections, technicians discovered an additional gas leak farther down the street. That was repaired, as well.

The company insists what it describes as “low-level leaks” never posed a danger to the community.

“Please know that at no time was the safety of the neighborhood or our system compromised,” O’Brien wrote. She said the company is reviewing the internal miscommunication to determine how it happened.

Following the repairs, Music is now breathing a little easier knowing the smell of natural gas is a thing of the past, but he said waiting years to get action still stinks.

“It shouldn’t take that long, not when you’re talking about a flammable gas,” he said.

Citizens Energy said reporting a suspected gas leak is the proper thing to do and, according to the company, its safety crews do investigate those reports quickly. If you smell a natural gas odor, hear the hissing sound of gas escaping or see other signs of a leak, utility companies recommend immediately leaving the area and, once in safer location, calling either your local gas company or 911. The phone number for Citizens Energy is (317) 924-3311.