Tired of all those iPhone updates? An Indiana doctor fights back in court

Daniel Dwyer said his iPhone updated automatically, without his permission, and now that it's updated, he can't go back to a previous version. 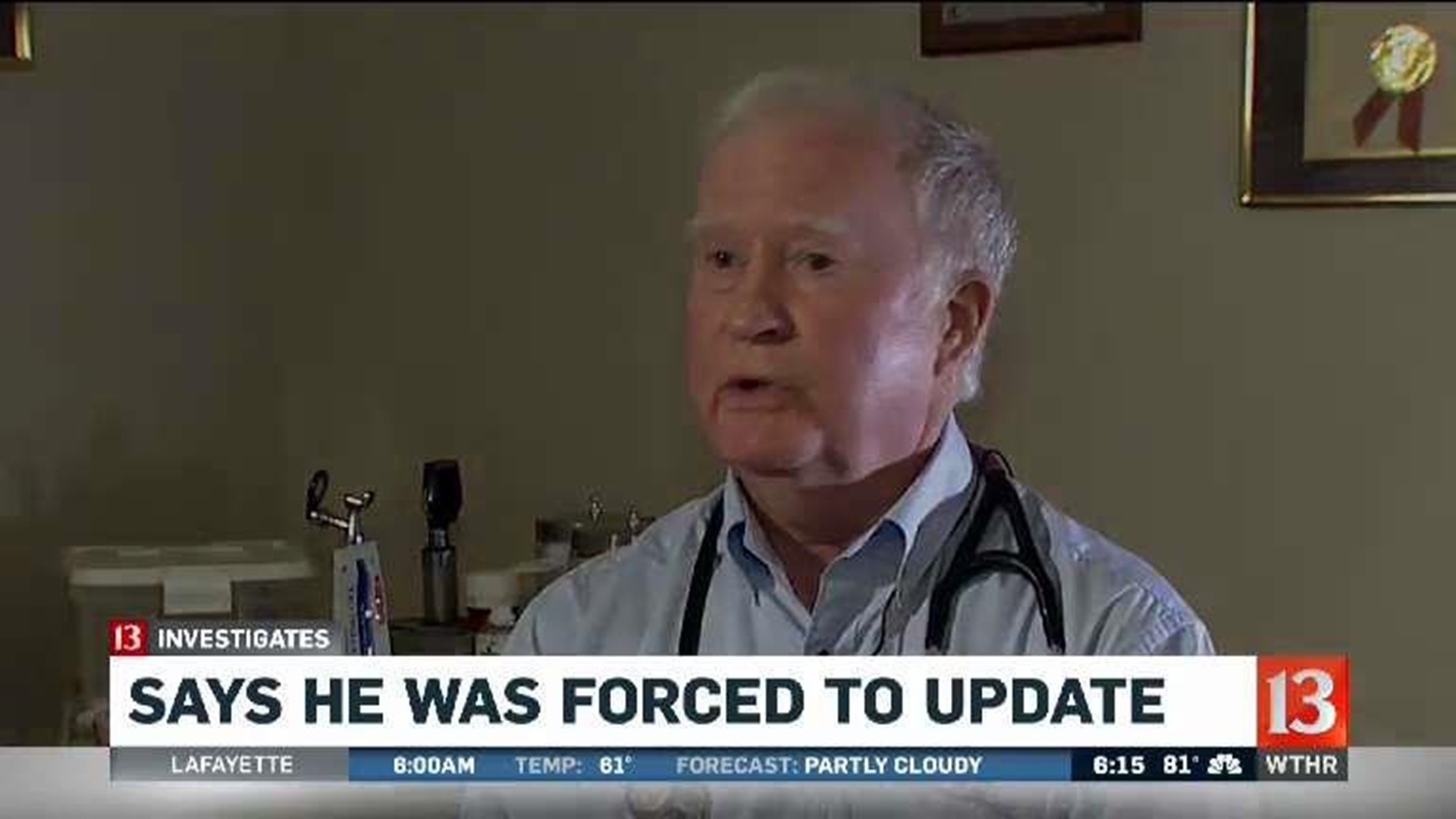 ROCKVILLE, Ind. (WTHR) - An Indiana doctor has filed a lawsuit against Apple, claiming the giant tech company disrupted his medical practice through a “devious trick” designed to force him and other consumers to update the operating system on their iPhones.

“They were harassing me for months, trying to get me to update. I never did and then "boom," they just decide to update, and they did it underhanded,” Daniel Dwyer told WTHR.

Dwyer has been a family doctor in Rockville, Ind., a small town about 60 miles west of Indianapolis, for more than four decades. When he started practicing medicine in 1976, few people had heard of cell phones, which were not yet sold commercially.

But nowadays, cell phones and medicine go hand in hand. Dwyer says his iPhone 7 is a crucial tool that allows him to communicate quickly with patients, other doctors, pharmacists and his staff.

“Any physician uses their [cell] phone a lot,” he said, pointing to a photograph on his phone showing a large, swollen rash on a child’s stomach. “A patient sent me this last night because their child had been stung by a wasp or bee, and that was a pretty bad reaction. She wanted to know what to do, and I told her she needs medical attention right away.”

Because he uses his cell phone so frequently, Dwyer says he has little patience for the constant flurry of messages he receives from Apple, instructing him to update to a newer operating system on his phone. The free updates offer iPhone users new features and increased security, but some consumers have been critical of glitches in previously-released updates.

“For a long time, I refused to update because the last time I did it, it was worse than it was prior to the update,” said Dwyer. “I usually see the [update] message on my phone, and it gives you an option to decline and do it later, and that’s what I choose.”

But several months ago, as the doctor attempted to call a pharmacy to get prescription information for a patient, Dwyer says his iPhone would not allow him to make the call. Instead, his phone initiated an update without giving him a choice to select another option.

“There was no option of ‘agree’ or ‘do it later.’ It just went right to update. They were making me push a button to say I agree to it, otherwise I can’t use my phone [but] I didn't agree to it in the first place," he recalled. “And I couldn't use my phone until the update finished. It was a devious trick that they did, and it’s not fair. They interrupted my business. Thank goodness it was not a life-threatening situation, but it could have been.”

Dwyer called and wrote Apple to complain and to request that his phone be reset to the previous operating system, but he says the company’s customer service agents told him they could not help. Apple Customer service sent a letter stating “we apologize for any inconvenience or frustration,” instructing him to call Apple’s customer care department for a resolution. Dwyer says a second round of phone calls, resulting in long wait times and several transfers from one customer service representative to another, was also unproductive. The doctor then sent Apple a $200 bill for his lost productivity, time and frustration. That didn't go anywhere either.

"They said, no, I couldn't do that,” explained Dwyer. “They said they couldn't pay me the $200, and they couldn't reverse my phone to the old operating system. Once it’s been programed, I guess they can’t reprogram it."

That's when the doctor decided to send Apple a stronger message. He walked out the front door of his office, crossed High Street and, less than 100 steps later, Dwyer entered the Parke County courthouse where he filed a lawsuit against one the world's largest corporations.

The notice of claim, filed in Parke County Small Claims Court, seeks judgment against Apple chief operating officer Tim Cook. It alleges Apple engaged in business practices that disrupted Dwyer’s medical practice, resulting in frustration and anger. The doctor is seeking $200 in damages, which he would like Apple to pay by check made payable to the Parke County Food Pantry.

“The [court] clerk said ‘Why are you only doing $200?' and I said ‘I don't care about the money. I care they don't do this to people,’" Dwyer said, adding that several other iPhone users have told him they experienced the same issue. “If it happened to me, how many thousands are there this is happening to?”

Asked what message he is hoping to send to Apple, Dwyer said “Don’t be devious. Treat people with respect. Customers should have a choice and a say in this."

Court records show Cook was served with the lawsuit last month when a representative at Apple’s Cupertino, Calif, headquarters signed for a certified letter containing the legal notice. A trial date has been sent for June 26.

Dwyer does not expect to see Apple’s CEO in Rockville later this month, testifying inside Parke County’s historic courthouse. He does, however, hope filing the lawsuit will prompt Apple to take a closer look at its iOS updating policies and encourage other iPhone customers to voice their frustrations. “If nothing changes, I’d like to see an attorney file a torte claim against them. I think the devious business practice need to stop,” he said.

WTHR contacted Apple earlier this month to ask questions about its iOS updates and whether it will respond to Dwyer’s legal claim. The company has not yet responded to WTHR’s inquiry.