The request for prayers at the Grant County Rescue Mission comes after 13 Investigates and county health inspectors discovered the charity was, quite literally, a mess. 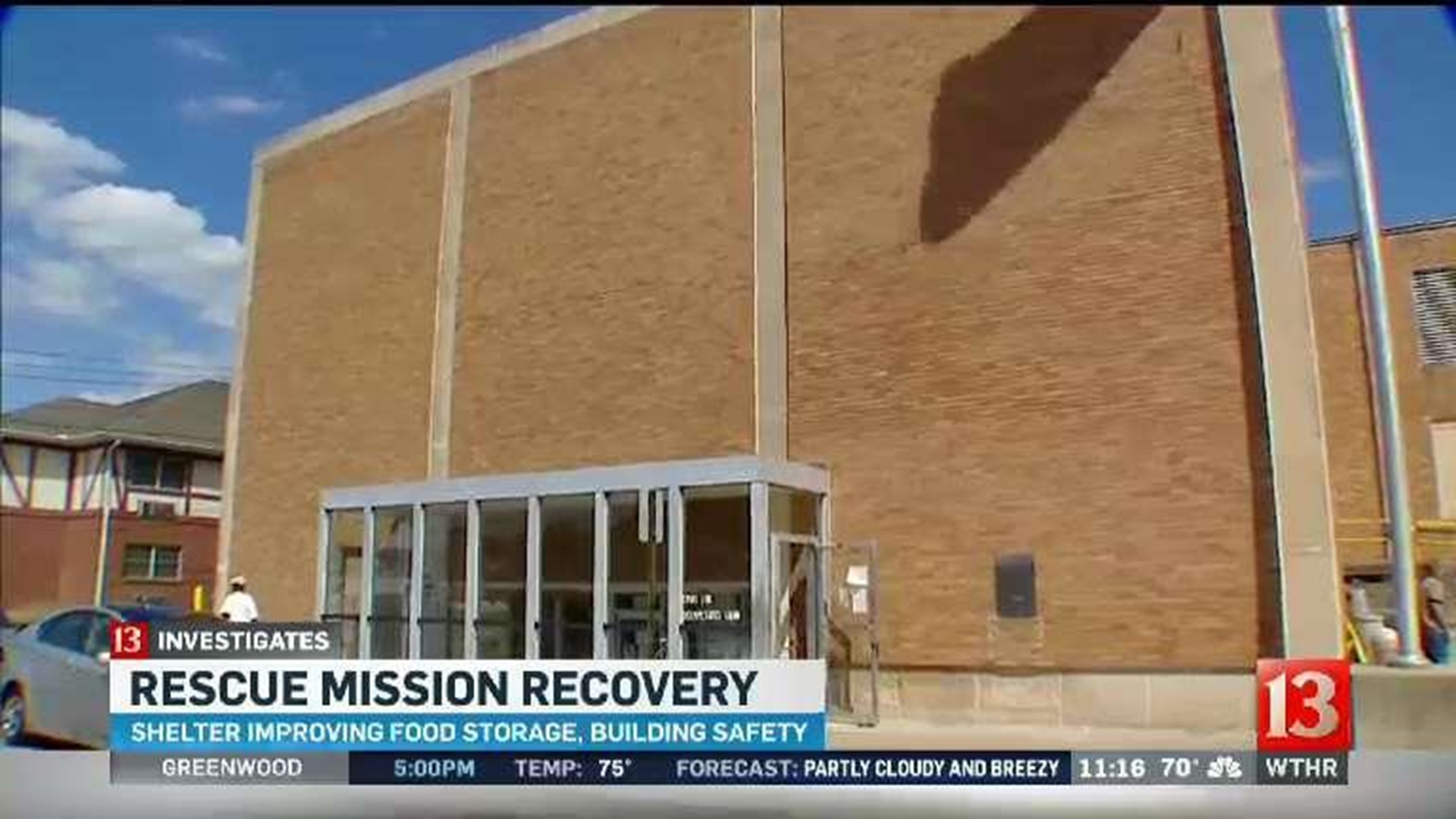 As the charity's interim director led my cameraman and me on a recent tour, the mood jumped back and forth between boundless optimism and harsh reality.

"If people are still down on the mission, it's because they're not up on the mission," he said. "We've made great strides, and we want people to come see what we're doing."

A moment later, as we walk into the kitchen, Raines shakes his head and becomes more somber.

"That's new. More than $1,500," he said, pointing to a new air compressor. "We weren't expecting that, but the old one broke. We're always dealing with something. It's been hard."

He then added one more sentence – seven simple words – that reveal the depth of Raines' confidence and concern: "Come. Visit. Tour … and pray for us!"

The request for prayers at Grant County's largest homeless shelter comes after 13 Investigates and county health inspectors discovered the charity was, quite literally, a mess.

Donated food, clothing, furniture and household goods had been stockpiled inside the Rescue Mission and neglected for years – resulting in massive piles of donations that were infested with rodents and cats. The Grant County Health Department Health ordered most of the items to be destroyed because they were contaminated by the critters' urine and feces.

Inspectors also noted other health and safety violations throughout the charity, including an infestation of bed begs in nearly all of the homeless shelter's beds and furniture.

The executive director and board president both resigned following the hidden-camera investigation, after admitting they re-directed donated food to their own homes. Some of that food went to family, friends and even pets instead of going to residents at the homeless shelter.

Stunned by the revelations, longtime supporters immediately stopped their donations. The charity, which relies heavily on community support to feed its homeless residents and to pay its staff and operating costs, saw its funding sources dry up overnight.

Repairing relationships – while at the same time repairing the Rescue Mission's aging facilities – has proven to be a difficult task.

“We can only move forward by first apologizing to you”

Raines and his wife, Paula, had nothing to do with the mess they inherited this summer. But decades of experience running other rescue missions helped them understand the challenge at hand.

"You've got to have trust to have support," he explained. "That's got to come first."

So one of the first things Raines did after agreeing to help the Grant County Rescue Mission was to send a letter to thousands of former GCRM donors to ask for their forgiveness.

"The last two months have made it clear that during this journey, the Grant County Rescue Mission has fallen short of its mission and in doing so has lost the trust of the community," the letter says. "We, like many of you, were heart broken by the news. We can only move forward by first apologizing to you for failing to protect and honor your trust in us."

GCRM Apology by WTHR on Scribd

The letter goes on to describe the work that will be completed to improve the Rescue Mission's aging facility, and the newly-adopted policies to ensure greater transparency and integrity.

"The board understood what they needed to do: basically apologize for not watching as carefully as they should and just own up to it. We've started to do that and the response has been very positive. I think there will be those who will be very difficult to win back again, but we're off to a positive start," Raines told WTHR.

He said the Rescue Mission has recently signed a letter of engagement with a Muncie accounting firm to perform a full financial audit – something the charity has not done in more than a decade. Raines hopes the audit will be complete by the end of the year to answer lingering questions about how previous GCRM leaders spent funds donated by the community. He told WTHR the audit will be released to the public.

"We don't have any idea how it's going to turn out at this point, but we're looking forward to knowing fully, as best we can, what's been happening over the past number of years," Raines said.

Overall, monetary donations are currently down about 50% from this time last year, according to the Rescue Mission. But following the apology letter sent to donors, contributions are once again beginning to trickle in.

Walmart, one of the charity's largest donors, might soon resume its donations, as well.

Last week, Raines spoke to a Walmart representative who expressed interest in once again delivering food from the company's distribution center in nearby Gas City. Those donations, which have helped the Rescue Mission serve thousands of meals annually to the homeless, were immediately suspended after WTHR's investigation showed tons of that food were re-directed by Rescue Mission leaders and not actually delivered to the homeless shelter.

"It was a very positive conversation," Raines said of his phone call with Walmart. "It's just great to know that they will reconsider and look at us again. That's what we wanted to hear. They want to come down for a tour to see what we've done and to make sure we'll be taking care of what they send to us and things won't happen like they did in the past."

In the meantime, Raines says the Rescue Mission is running very low on canned food and other non-perishable food items.

The other area hit hardest by a sharp decline in donations is staffing to help the homeless shelter's residents.

Most of the charity's full-time employees – including the former executive director and two of his family members – have resigned. With limited funding, the Rescue Mission has not yet been able to fill several crucial positions. In addition to a permanent director, the organization needs a maintenance supervisor, a kitchen supervisor, and staff to assist residents with services such as mental health, addiction recovery and job training.

“We need people to step up now”

Despite depleted staffing and funds, the Rescue Mission has made steady progress in recent months to improve health and safety for its residents.

The organization installed new cabinets and shelves in the kitchen. And staff, residents and volunteers cleaned out an old supply room to make a new storage pantry to keep track of donated food. That food is now neatly stored in sealed containers rather than sitting out where it is susceptible to rodents.

The Rescue Mission has installed 21 new emergency exit signs, new fire doors, new lighting in the sleeping area and new wiring throughout much of the building – all important improvements to bring the Rescue Mission into compliance with building codes.

Major improvements to the residential bathroom and to flooring are planned in the coming weeks.

Raines has tapped into his connections at other rescue missions to seek assistance with some of the projects, and he hopes the community will offer help, as well.

"The need is still out there, and we can't do all we need to do without the help of the entire community," he said. "We need people to step up now. We really do."

Residents have taken notice of the changes.

Wayne Hunt is a resident of the Grant County Rescue Mission.

"Yeah, it's looking a lot better here," said Wayne Hunt, who has lived at the Rescue Mission for the past 15 months. "It seems like Ray really cares. I think they're looking after us more now than what they did before. I wish he would stay."

Raines, who came out of retirement to serve as the GCRM interim director, plans to lead the charity only on a temporary basis – long enough to steer the charity through a turbulent time.

How you can help

The Grant County Rescue Mission is currently looking for both financial and volunteer assistance to help in its recovery.

According to the charity, areas of greatest need include:

Monetary donations of any amount to support programs

The organization is also looking to add several more members to its Board of Directors.

If you would like to donate your time and service, or if you have a question, contact Ray Raines at 765-662-0988 or GCRM@sbcglobal.net.