Indiana's Department of Homeland Security is accused of bullying and standing in the way of safety. 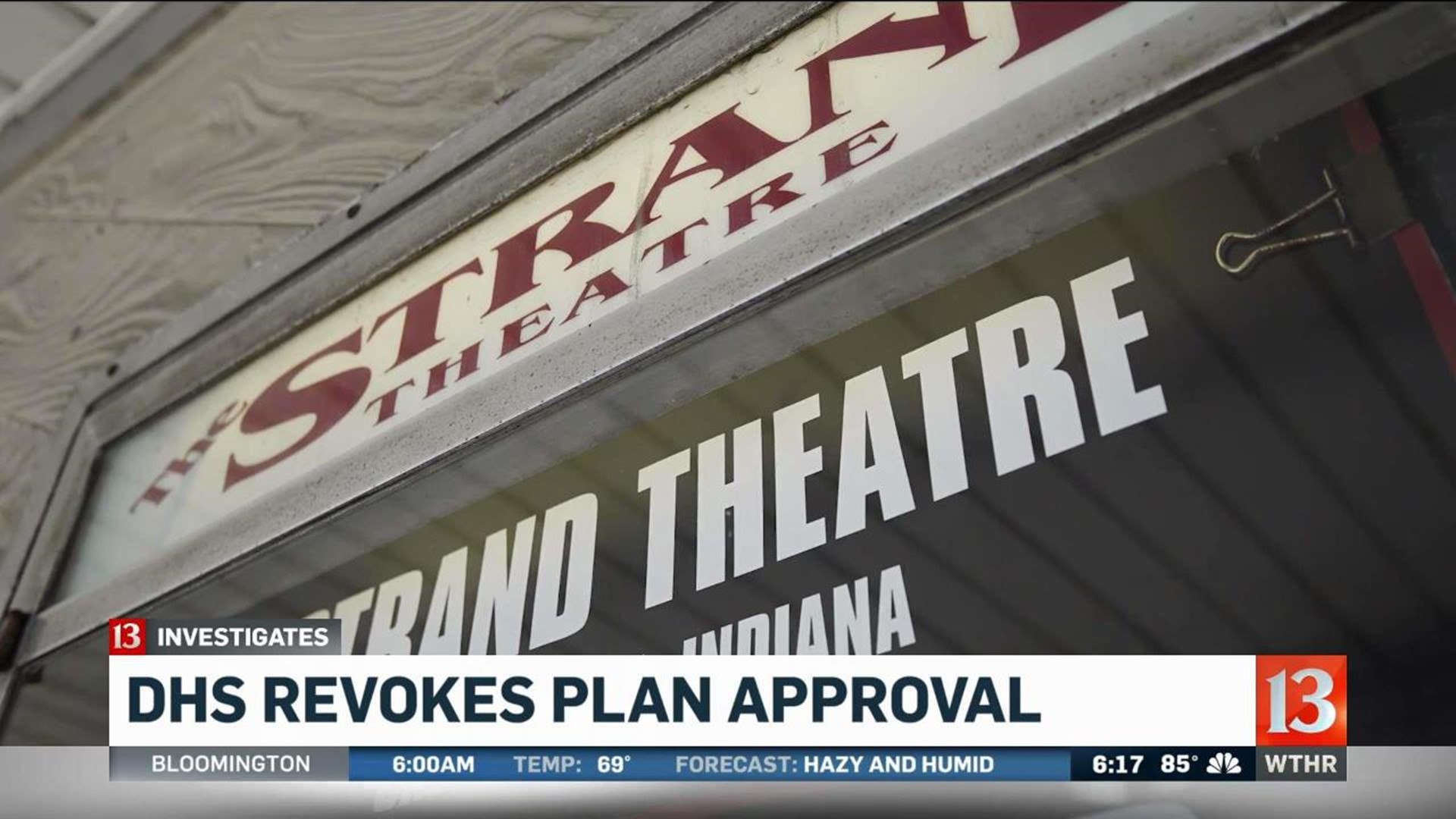 SHELBYVILLE, Ind. (WTHR) - First there was scrutiny over management of a high profile arson case and an alleged culture of sexual harassment.

Now Indiana's Department of Homeland Security is accused of bullying and standing in the way of safety.

13 Investigates pulls back the curtains on inspections at the Strand Theatre in Shelbyville, where directors there say DHS is costing them unnecessary time and money.

The outline of a new fire exit at the Strand has been cut, but none of the bricks have been removed. The Board of Directors there were threatened that opening that hole in the wall could shut down the 100-year-old entertainment venue in the heart of town.

"We have had everything from bluegrass to pop to gospel," said David Finkel, theatre director. "We're in a 1916 theatre. We just passed a hundred years old, you have to improve the theatre," he said speaking of plans to create a larger fire exit and stage. The Board wanted to improve access for visitors and performers with disabilities.

Problems with the Indiana Department of Homeland Security started months after Finkel and his team got a structure design release from the State Fire Marshal's office. In January 2016, the organization was cleared to start the work. No other conditions or approvals were required.

But a busy 2016 performance schedule left contractors only time for prep work.

"We would have taken the bricks out and exposed that new opening, but at this point we just didn't really need to," explained Finkel.

Months later, DHS came to inspect the theatre for its annual Arts and Entertainment permit.

According to Finkle, that inspector overruled the proposed improvements.

He said no work on the fire exit could begin until a costly sprinkler system was installed.

"We have no idea what caused the inspector to go on the tact that he did," Finkel told 13 Investigates.

That's when the theater's attorney met with staff from former Governor Pence's office.

Weeks later, five DHS inspectors and the State Fire Marshal returned to the Strand for what was supposed to be a meeting.

"Ended up not being a meeting but an inspection and everybody involved in that meeting including Marshal Greeson crawled all over our theatre, up above our stage," said Finkel, recalling the surprise turn of events.

Almost a year after the first permit was issued, the Strand Theatre Board was put on notice: it's construction design release was revoked. The fire exit work canceled.

In a letter to Finkel and the engineers handling the project, DHS Section Chief wrote "These inspections revealed work planned, completed or currently underway that was not reflected in the scope of the documents filed and which has broader code compliance and life safety implications than the work reflected in the field documents."

"We understand that this undocumented work is part of a master plan to restore the historic theatre," the letter continued.

"No one (in the local building industry) had ever heard of such a thing. It was unprecedented," Strand said, shaking his head in disbelief.

But just as quickly as the permit was rescinded, an appeal and closed door meeting with Greeson reversed that decision.

Indiana's Building Law Compliance officer said the revocation was rescinded based upon "information presented during a conference." But he warned, "...this CDR (Construction Design Release) applies only to the work represented in its application filing."

Still, the ordeal wasn't over.

In March of this year, inspectors reportedly told Finkel the Fire Marshal ordered a construction progress inspection at the Strand, even though no work had been done.

The result of that inspection: two violations for failing to have construction design releases in place for work done years ago.

First for a new heating and air conditioning system replaced in 2015.

"We had been working off of 1954 equipment," said Finkel, talking about the old HVAC system. "It was horrible equipment, open flames," he said.

The same rule violation was stated for work done between 2009 and 2013 to replace electrical panels at the theatre.

"This was a major safety improvement for the Strand Theatre, having modern electricity," Finkel added.

Worse yet, it appeared DHS misapplied the rule.

"They were locally permitted, locally inspected, and at the time it was decided that a construction design review which we have since found according to Indiana Code was not necessary," Finkel said, after having all of the permits submitted with the City of Shelbyville reviewed.

Still DHS was threatening the 501(c)3 not-for-profit with hundreds of dollars in fines each day.

Within days of our inquiry, the Strand was notified there are no violations. The inspection notice simply read "complied" and once again the venue is in the clear.

But the year of delays and money spent defending the theatre isn't sitting well. Finkel said something must be done about the actions of DHS.

"We have spent almost a year putting up with the arbitrary, capricious requests of a hubristic department within our state government, and that is shameful," he said.

13 Investigates repeatedly asked DHS to explain its actions against the Strand and allegations of bullying and mistrust.

A spokesman promised to get back with 13 Investigates Tuesday afternoon but failed to respond in the time requested. In an email, the spokesman said the agency was still working on getting information for this report. 13 Investigates first asked DHS to sit down and talk about the Strand Theatre a week ago.

According to Finkel, until last year, the Strand had never received an inspection violation since it reopened in 2008.

He says the Board hopes to complete the fire exit improvements after this performance season.