Weeks after Indiana State Excise Police declared products containing CBD oil to be illegal and subject to confiscation, the state’s alcohol and tobacco police suddenly changed their minds - and we now know why. State officials say they don’t actually know if CBD oil products are illegal or not. 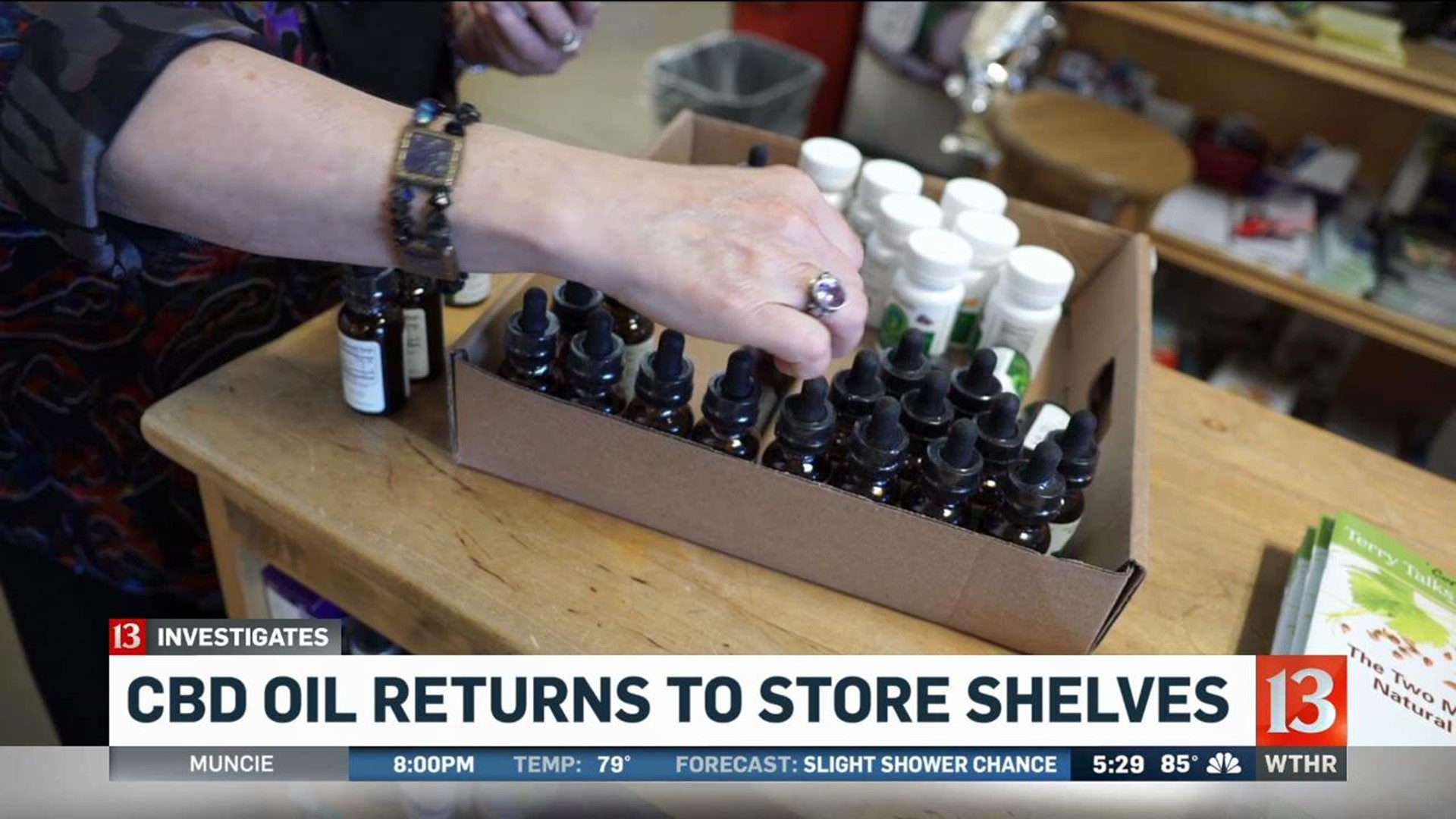 INDIANAPOLIS (WTHR) - Weeks after Indiana State Excise Police declared products containing CBD oil to be illegal and subject to confiscation, the state’s alcohol and tobacco police suddenly changed their minds - and we now know why. State officials say they don’t actually know if CBD oil products are illegal or not.

“It's a complicated issue, and we're trying to work through it and figure out what the rules are,” said David Cook, chairman of the Indiana Alcohol and Tobacco Commission. “We’re trying to determine the legality. There’s differing legal opinions whether it’s legal or not, so until those issues are resolved, we’ve placed a moratorium on confiscating it.”

The stunning admission from the state agency that oversees the Indiana State Excise Police comes just two months after excise agents raided a Fresh Thyme grocery store near Greenwood – triggering an immediate chilling effect on the sale of CBD oil products across Indiana. Asked why it conducted the raid, an excise spokeswoman told WTHR:

“CBD oil is not legal to sell or possess in Indiana… The businesses found in possession are cited administratively under their alcohol or tobacco sales certificate for the preliminary charges of possession of marijuana and possession of [a] counterfeit controlled substance.”

But a series of reports by 13 Investigates – and loud objections by Indiana residents who say CBD oil has safely and effectively treated their chronic pain, anxiety and other medical conditions – have prompted state officials to re-examine their position.

At the heart of the issue is whether CBD oil is considered a derivative of marijuana. Both CBD and marijuana come from cannabis plants. But unlike marijuana which has high levels of THC, the compound that produces a “high,” CBD oil is produced from an industrial variety of hemp that has little or no THC at all.

State agencies have been discussing the issue for weeks, since WTHR first exposed the Excise Police raid at Fresh Thyme market. But there is little consensus on whether CBD products are prohibited under state law. Some law enforcement agencies have told WTHR they believe CBD oil is perfectly legal in Indiana. Some Indiana State Excise officers believe it is not. The attorney general’s office is now involved to help sort things out.

“There is a lot of confusion about this topic even within state government – agencies trying to figure out what is legal and what is not legal,” said AG spokesman Jeremy Brilliant. “The role of the attorney general’s office in all of this is to clarify that.” Brilliant did not know how long it might take to provide that clarity, but he said the attorney general is working diligently with other state agencies to look for answers.

In the meantime, it is unclear why state excise officers raided stores and confiscated CBD oil products when there is so much uncertainly and ambiguity surrounding CBD’s legal status in Indiana. Last month, an excise police officer told the owner of a natural pet care store that she could be arrested and taken to jail if she did not stop selling CBD oil products intended to ease pain in dogs and cats. The store is not licensed or regulated by Excise Police and the state Alcohol and Tobacco Commission.

“There’s no question that there’s no jurisdiction for the Indiana Alcohol Commission to be regulating places that don’t have alcohol permits,” said Cook.

While state officials are studying the issue, CBD oil is now back on store shelves and selling fast. CBD retailers tell WTHR they are seeing a boom in sales following the controversy as many curious Hoosiers try CBD oil for the first time.